A painting thanking the first line of defense for their tireless efforts in facing the Corona pandemic qualified Filipino Christian Barba Olidana to win the mural and arts competition organized by the Waterfront Market for the third year in a row, in cooperation with the Culture and Arts Authority in Dubai. 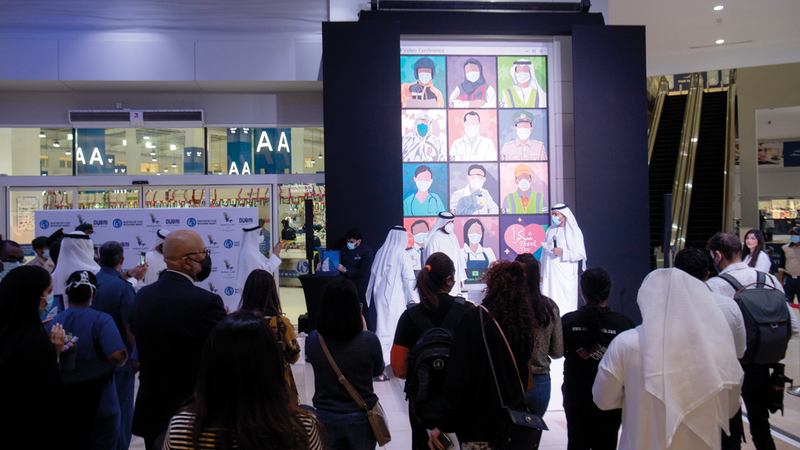 Simulate those present at the heart of danger

A painting thanking the first line of defense for their tireless efforts in facing the Corona pandemic qualified Filipino Christian Barba Olidana to win the mural and arts competition organized by the Waterfront Market for the third year in a row, in cooperation with the Culture and Arts Authority in Dubai.

The painting is directed to the workers on the first line of defense by thanks for everything they have done in addressing the pandemic, as the winning work was simulated by all those who chose to be at the heart of the danger to protect people from the virus.

Regarding his winning work, artist Christian Barba Olidana said: “The work is inspired by the application (Zoom), which was popularly used during the (Corona) pandemic, specifically during the quarantine period, as people followed their communication and work through it, and it was placed in the meeting depicted in painting 12 A column that appears in 11 fields of professions and personalities that were on the first line of defense.

He added: "I placed in these boxes a silencer to indicate their choice to continue their work, despite the challenges and circumstances, their endurance of difficulties and their presence in the front lines to serve people, while the box that sends thanks to everyone was the one in which the loudspeaker works, which carries joy and hope."

Christian continued: “I am not a professional artist, as my primary work is engineering, but drawing is a hobby for me, and this painting is the first of this kind to be presented to the public, as I am used to realistic painting, and I participated in the competition because I found a space in it to express myself. It is the second time that I participate, and I did not win last year ».

He pointed out that he did not expect to win this year as well, especially since there are a lot of good works, explaining that "drawing the painting on the wall took him five days of continuous work."

The Filipino artist prepared the wall before painting and used acrylic colors on it without leaving the glossy layer on the work surface, so that the lighting would not be reflected on it, and thus affect the vision of all the details of the work.

For his part, Director of the Fine Arts Department at Dubai Culture, Khalil Abdul Wahid, told Emirates Today about the authority’s support for the initiative: “The authority cooperates with the waterfront market every year, but this year the cooperation comes in a new framework, As the initiative is important in exploiting the walls, for the sake of the arts and highlighting the creativity of artists, especially since the organization that organizes it is not concerned with art, but rather supports creativity.

He pointed out that the competition highlights talents in the Emirates, and what distinguishes this session is that it simulates the conditions imposed by the pandemic, and how through art, thanksgiving can be given to the first line of defense, pointing out that the jury was concerned with the way in which the participants presented their ideas about the pandemic, and how it is implemented On the ground, to enrich the art scene.

With regard to the criteria concerned with choosing the winning work, Abdul-Wahed emphasized that it “was directly linked to the distinct idea, because life calmed down for a period of time, but art did not stop, and this was reflected through the paintings, as it clearly expressed the conditions that people lived.”

For his part, Director of the Waterfront Market, Muhammad Al-Madani, said: “This year the mural and arts competition witnessed a remarkable turnout, as we received many distinguished entries, but the mural of the Filipino artist is a sincere expression of our deep gratitude to all the brave frontline workers, who Help the community tirelessly and tirelessly in the battle against (Covid-19) during this difficult year.

He added, "The work was sincere in its portrayal of the ways we communicate with each other during the closure period by means of video communication platforms, so it will be displayed permanently on the (waterfront) to always remember the efforts of our heroes."

The Director of Marketing Department at the Waterfront Market, Sami Eid, told «Emirates Today»: “The mural and arts competition is organized for more than one goal, including enriching the art scene, supporting artists and creating a platform for them to present their creativity and create an artistic formula to communicate with the public.”

He added, "The theme chosen this year aims to thank the first line of defense, who were heroes at this stage, so the participating works went directly to them."

Eid noted that the number of posts was greater than in previous years, pointing out that “art is not confined to a specific place, so that even when a person enters a specific place, everything that one sees will be art in one way or another. Art surrounds a person in many faces and shapes,” as he put it. .

A remarkable turnout and distinguished participations competed for the award.

• Life calmed down for a while, but art did not stop, and this is what the works highlighted.