Emirati Ahmed Ali Abdullah Nasser Al-Balushi outperformed himself in light of the Corona pandemic, which inspired him to employ four of his favorite hobbies, namely: archery, carpentry, blacksmithing and recycling, to establish a "sustainable agriculture house" in his home, where he succeeded in building the "Strawberry Tower" , And production more than 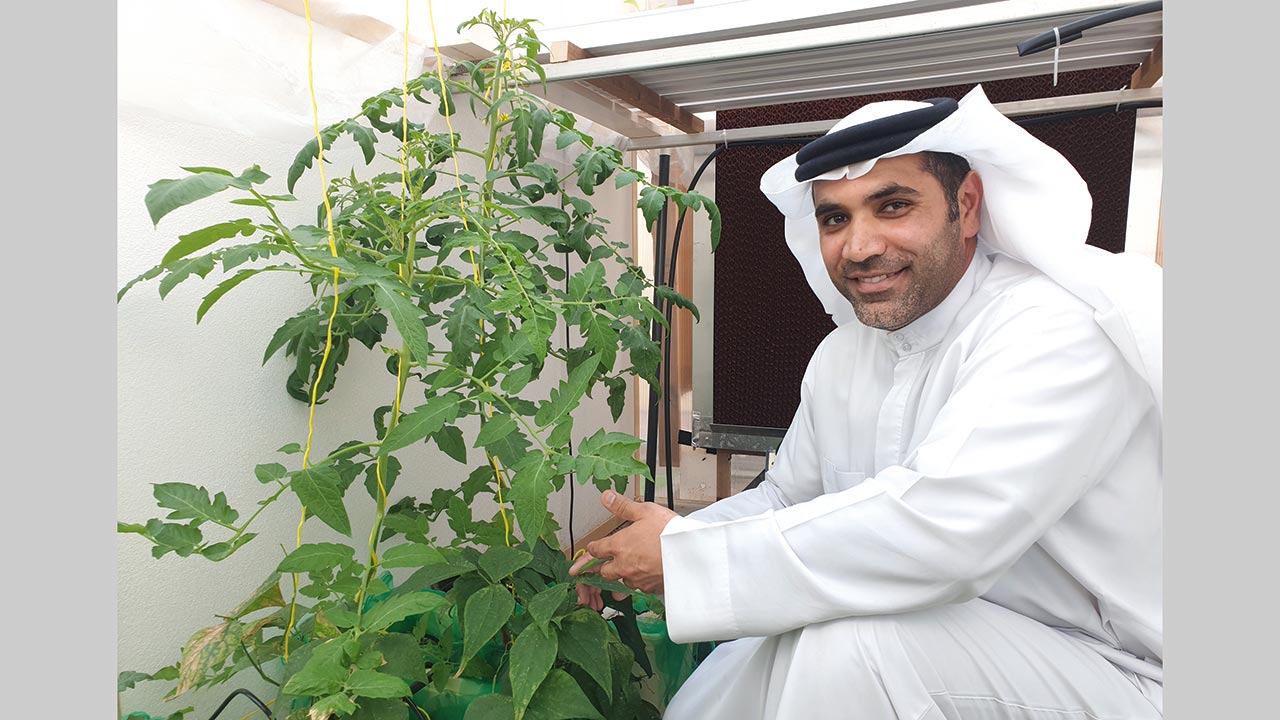 Archery, carpentry and blacksmithing ... a recipe for success in a "sustainable agricultural house"

Al-Balushi employed four of his favorite hobbies to establish a "sustainable agricultural house" in his home.

Emirati Ahmed Ali Abdullah Nasser Al-Balushi outperformed himself in light of the Corona pandemic, which inspired him to employ four of his favorite hobbies, namely: archery, carpentry, blacksmithing and recycling, to establish a "sustainable agriculture house" in his home, where he succeeded in building the "Strawberry Tower" And the production of more than 15 varieties of vegetables in less than six months, at a cost not exceeding 5000 dirhams, depending on three types of hydroponics, explaining to "Emirates Today", that it has achieved several goals, including self-sufficiency, and the provision of organic food for members of his family And preserving their safety, by reducing their visits to societies and grocery stores, as a preventive measure in light of the pandemic, which made it worthy of the Zayed International Foundation for the Environment being crowned a champion of the fourth edition of the Urban Agriculture Champions competition.

Al-Balushi confirmed to “Emirates Today” that honoring the Zayed International Foundation for the Environment reflects the wise leadership’s interest in the citizen, and its keenness to support and encourage him, stimulate and highlight his energies and talents, pointing out that his keenness to keep pace with national awareness efforts, in light of the Corona pandemic, was a strong impetus to think about Home farming, and he said: “Archery, carpentry, blacksmithing and recycling are my favorite hobbies, and despite their differences, there are commonalities between them, which are: planning, accuracy, mastery and patience to reach the goal, and when I decided to start farming, I did not think about it as a temporary activity until the end of the pandemic. And a great responsibility, and I made sure to draw a road map for its sustainability in my life.

Al-Balushi talked about the “strawberry tower”, which he considered an important achievement, and said: “Vertical or vertical farming combines rapid growth with more plants in the least possible area, and also combines an attractive artistic form with productive efficiency,” adding that it is “a smart choice in both environmental and economic terms.” ».

He continued, "I currently have 24 seedlings in (Strawberry Tower) growing in the middle of (Barlite), and I advise everyone to use the spaces in the balconies to implement this agricultural pattern."

A plan and a vision

Al-Balushi added: “I sought help from some friends who have experience, know-how and knowledge in the agricultural field, joined some groups specialized in agriculture via WhatsApp, and viewed many educational videos about the best home agricultural practices via YouTube, after designing an accurate plan and creating a knowledge vision. Clearly, I built a sustainable greenhouse in my outdoor garden, and turned a damaged water cooler in the house store into a usable device that cools the water for watering plants around the clock, and created an air-conditioning system to control the temperature and ventilation in the farmhouse.

Al-Balushi revealed that he relied on hydroponics for its ability to provide 95% of the water, so he started farming based on three methods: "dutch pocket", "pipe farming", and vertical farming. He also used "barlite" as an alternative to soil, for his ability to provide and extend the necessary moisture to plants. With solutions and oxygen in a more efficient and quality manner, and currently he grows more than 15 varieties of vegetables, including: zucchini, eggplant, cucumber, watercress, thyme, coriander, parsley, corn, lettuce, okra, mint, tomatoes and peppers of all kinds, etc. Charming and beautiful.

Dr. Mohamed Ahmed bin Fahd, Chairman of the Higher Committee of the Zayed International Foundation for the Environment, confirmed that the Urban Agriculture Champions competition has attracted more than 100 entries from 20 nationalities and different age groups during its past three seasons. “The Urban Agriculture Champions competition has started to bear fruit,” he said. It began to encourage community members to highlight their home agricultural experiences, within a competitive atmosphere under the supervision of an evaluation committee accredited by the Zayed International Foundation for the Environment, and Ahmed Al Balushi, a model of persistence and excellence, as he realized the true value of agriculture and worked hard to establish a sustainable agriculture house.

• He succeeded in producing 15 varieties of vegetables in less than six months, at a cost of 5000 dirhams.

• He used some friends, YouTube and WhatsApp groups to educate himself.