Promoter of "Da Ai Qingchen": It is everyone's responsibility to solve pneumoconiosis

Chinanews.com, Hangzhou, October 25th, wire title: "Da Ai Qing Dust" initiator: It is everyone's responsibility to solve pneumoconiosis   Author: Tong Xiaoyu   "China's 6 million patients with pneumoconiosis, 90% of which are farmers." Even though they have been popularized many times, when these two numbers appeared on the screen, the face of Wang Keqin, chairman of the Beijing Da Ai Qingchen 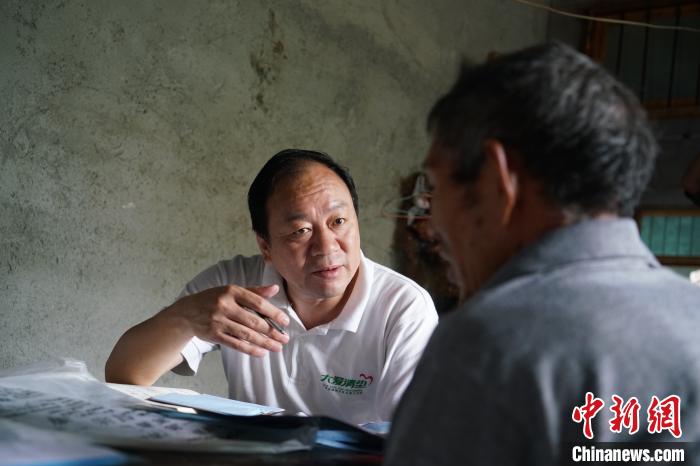 "China's 6 million patients with pneumoconiosis, 90% of which are farmers." Even though they have been popularized many times, when these two numbers appeared on the screen, the face of Wang Keqin, chairman of the Beijing Da Ai Qingchen Public Welfare Foundation, turned red from excitement.

"The number of people suffering from pneumoconiosis is increasing every year. Home decoration, urban projects, etc. will cause illness. We must popularize science for the general public and let more patients get help. No one is an island, and it is everyone's responsibility to solve pneumoconiosis."

On October 24, the Chongyang Poetry Festival "Run for Love and Speak for Love" initiated by Beijing Daai Qingchen Charity Foundation was held in Hangzhou, Zhejiang.

Participants used the works of "Miner Poet" Chen Nianxi as the subject of recitation to popularize pneumoconiosis among the public.

Pneumoconiosis is currently the most serious occupational disease.

In the process of sand and gravel processing and highway construction, a large amount of dust will be inhaled into the lungs.

The patient’s lungs will gradually become fibrotic and eventually become as hard as a stone and cannot breathe.

A former investigative reporter, Wang Keqin founded the Da Ai Qingchen charity organization in 2011, initiated a charity action to rescue pneumoconiosis farmers brothers, and is committed to promoting the prevention and ultimate elimination of pneumoconiosis.

Why care about pneumoconiosis farmers?

Wang Keqin provided a set of data: Among all occupational diseases, pneumoconiosis accounts for 90% of the total number of cases; among all pneumoconiosis patients, farmers account for 90%.

Many business owners do not sign labor contracts with migrant workers, resulting in migrant workers not being able to enjoy work-related injury protection after illness, leading to poverty due to illness, and the situation of poverty and disease is prominent.

"The high-speed rail runs at high speed. But how many caves does the high-speed rail pass through? How many pneumoconiosis caused during the hole drilling? The sacrifices of these people are closely related to each of us. No one is an island." Wang Keqin said.

To this end, since 2011, Da Ai Qingchen has penetrated into remote villages across China and has provided life-saving, school-aid, poverty-stricken and rehabilitation assistance to more than 80,000 pneumoconiosis peasant families.

"Pneumoconiosis does not choose the age. The youngest patient I have ever seen is 18 years old." When he said this, a documentary made by Da Ai Qingchen was playing on the big screen.

That is the last image left by many patients.

And the line of words typed at the beginning of the movie is even more moving: this is not the breathing of a sound sleep, but the gasp of a worker with pneumoconiosis before his death.

Wang Keqin used an analogy. Most people with pneumoconiosis suffer from the extreme desire for oxygen after a long-distance race.

It is reported that since 2014, the organization has released the "Survey Report on the Living Conditions of Pneumoconiosis Peasant Workers in China" every year for reporting to various national departments so that relevant agencies can understand the current situation, plight of pneumoconiosis peasants in China, and policy problems.

In his view, only legislative guarantees can fundamentally solve the problem of pneumoconiosis farmers.

"We cannot allow pneumoconiosis farmers to rely solely on donations from caring people to sustain their lives. They need corresponding responsibility guarantees so that every patient can be treated."

Speaking for patients with pneumoconiosis is also a consistent "career" of "miner poet" Chen Nianxi.

The tool of his choice is text.

"I spent my middle age at a depth of 5,000 meters/I burst the rock formations again and again/to regroup my life." Seven years ago, the Chen Nianxi who wrote "Blowing up the Chronicles" was still a worker working five kilometers underground. Blaster.

He is also famous for this poem.

Later, he began to experiment with prose and non-fiction writing.

Most of these works are based on his mining experience and the status quo of some pneumoconiosis patients.

In order to show their more real living conditions, he has traveled throughout many pneumoconiosis villages.

Although he has been away from the mine for many years, he was still diagnosed with pneumoconiosis after 16 years of blasting work in April this year.

"Unexpectedly. When working in the miner industry, I was already prepared for this."

Pneumoconiosis is irreversible, but fortunately Chen Nianxi's current condition is not serious, and occasionally coughing.

"While I can write, I have to speak up. Literature is about presenting the lives and destinies of all walks of life in this era."

At the scene, readers read one of his poems "Sea Tranquility": In the far north / new wind and heavy snow are spreading across the horizon / oh the sky is shining and the morning is cold / the sea is quiet / you have an iron sweater.