This is the unpleasant adventure experienced by Jeanne, a literature student, when she wanted to go to the Parisian cultural establishment last Tuesday. The Musée d'Orsay has since apologized 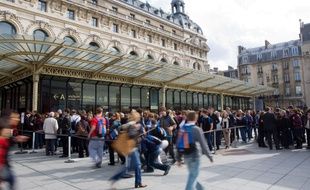 Illustration from the Musée d'Orsay.

“It is Tuesday, September 8, the heat has risen in the afternoon and the arms, torsos, backs are revealed in Paris, drawn with pretty suspenders and beautiful curtains.

My desire, at the end of the day, is to go to the Musée d'Orsay, far from suspecting that my cleavage will be a subject of contention ”.

This is how Jeanne begins her open letter to the Musée d'Orsay posted on Twitter on Wednesday, accompanied by a photograph of the young woman with the outfit that was hers when she presented herself at the doors of the Paris museum this Tuesday. the.

Invited to put on her jacket

Quickly, the literature student understands that her cleavage is controversial when no one speaks to her clearly.

"Oh no, it won't be possible, that's not possible", would have said an agent in charge of the control of reservations, Jeanne's first interlocutor.

"Another manager intervenes, at no time is I told that my cleavage is a problem, they fix my breasts ostensibly, we designate an 'that'", wrote Jeanne again.

Agents invite her to put on the jacket she is holding in her hand.

What she refuses at first.

"I don't want to put on my jacket because I feel defeated, obligated, I'm ashamed, I have the impression that everyone is looking at my breasts, I am only my breasts, I am not than a woman they sexualize, ”she writes.

“I put on my jacket - a sigh of relief from the museum officials - I go inside the museum.

Inside: paintings of naked women, sculptures of naked women, artists praised as engaged in the halls of the museum: men in marcel, women in bare backs, in brassieres, in crop tops, but all thin and with very few breasts, says Jeanne before wondering if they would have let her enter without glare, if she had worn certain outfits of these women that I met ”.

Before concluding further: "I am not only my breasts, I am not only a body, your double standards should not be an obstacle to my right of access to culture and knowledge".

We learned of an incident that occurred with a visitor when she entered the Musée d'Orsay.

We deeply regret this and apologize to the affected person we contact.

The response from the Musée d'Orsay to the open letter will not be long in coming.

“We deeply regret it and apologize to the person concerned,” he wrote.

In a press release, the Orsay Museum specifies that a "reminder of the reception rules has been made to the service provider placed at the museum entrances".

Contacted by Liberation, Jeanne also specifies that she was called by the communication unit and by the administrator of the museum who told her that what she had suffered was not normal and did not correspond to their policy.