Gao Wenbin, the last person who witnessed the Grand Judgment in Tokyo, passed away at the age of 99

Gao Wenbin, the last person who witnessed the Grand Judgment in Tokyo, passed away at the age of 99   On September 7, 2020, the reporter learned from the China Democratic League Shanghai Municipal Committee and Shanghai Maritime University that the last person who had personally experienced the Tokyo Grand Tribunal and Professor of Shanghai Maritime University, Mr. Gao Wenbin, was ranked first in

Gao Wenbin, the last person who witnessed the Grand Judgment in Tokyo, passed away at the age of 99

According to previous news on the WeChat official account of the "Shanghai Democratic League", Gao Wenbin, born in December 1922, was a native of Shanghai, a jurist, translator, and historian.

Joined the Union in September 1985.

On July 20th, we visited Mr. Gao in the hospital. Unfortunately, he suddenly fell into a coma that morning and was unable to accept our interview.

Looking at him lying peacefully on the hospital bed, and looking back at the life legend of this century old man, people can't help but feel full of emotion.

In September 1941, Gao Wenbin, who graduated from the High School Affiliated to Soochow University, entered Soochow University Law School to conduct systematic studies of Anglo-American Law and Chinese Law, and obtained a Bachelor of Laws in 1945.

On August 15th, Japan announced its unconditional surrender. Gao Wenbin recalled that at that time, everyone shared the joy after the victory of the War of Resistance against Japan. "That time was my happiest and most exciting time. I felt that the Japanese invading army finally paid off. Up."

In November 1945, the International Prosecution Bureau of the Far East International Military Tribunal was formally established, and Xiang Zhejun was appointed as the Chinese prosecutor.

The Tokyo trial applies Anglo-American procedures. At the same time, the official language of the court is English and Japanese. Therefore, it is necessary to continue to send relevant professionals.

At that time, Soochow University was the only school in China that taught Anglo-American law courses. Therefore, Gao Wenbin's teacher and a well-known Shanghai lawyer Liu Shifang recommended Gao Wenbin with enthusiasm and excellent English to Xiang Zhejun.

After testing, five translators including Gao Wenbin were hired.

They flew to Tokyo, Japan by a US military transport plane at Shanghai Jiangwan Airport on May 15, 1946.

In this way, Gao Wenbin became one of the 17 Chinese representatives participating in the Tokyo trial.

From May to September 1946, Gao Wenbin served as an interpreter for the Office of the Chinese Prosecutor of the International Prosecutors Bureau.

After the translation work, he was left as secretary by Xiang Zhejun because of his outstanding performance.

In this way, Gao Wenbin continued to participate in the work of the Chinese procuratorial team until the end of all work in August 1948.

When serving as the secretary of the Chinese prosecutors, Gao Wenbin's main job was to translate and verify court records, and was responsible for the liaison between the International Procuratorate and the Chinese Prosecutors Team and the handling of documents.

All English was used in the court. The most urgent task before Gao Wenbin was a large amount of translation work and sorting out documents. He had completed various tasks all night long.

The Tokyo trial lasted 924 days. Due to its large scale, complexity, and numerous witnesses and evidence, it has become the trial with the largest number of participating countries, the largest scale, the longest court session, and the most extensive archives in human history.

In the trial session of the Chinese representative, the difficulties and pressures faced one after another.

After arduous prosecution, proof, debate, interrogation, and sentencing, 17 Chinese representatives finally completed one impossible task after another, and even persuaded the last emperor Pu Yi to testify in court.

According to the Anglo-American law procedures applicable to the Tokyo trial, any suspect must be presumed innocent, and the prosecutor must provide sufficient evidence and be convicted and sentenced by the judge.

As Japan systematically destroyed a large amount of evidence before and after the surrender, and the national government authorities had insufficient preliminary preparations for the Tokyo trial and failed to collect evidence and witnesses systematically, the important task of collecting evidence fell on China. On the shoulders of the inspection team.

Everyone in the Chinese procuratorial team will take time to find evidence that can help the trial.

Gao Wenbin was looking through the archives and found a shocking material.

He discovered a report titled "The Record of One Hundred People" in the "Tokyo Niichi Shimbun" (now "Mainichi Shimbun") in December 1937. In the article, he wrote that two Lieutenants Mukai Toshiaki and Noda Takeshi were attacking Nanjing from Shanghai. On the way, it was agreed that the one who killed 100 Chinese people first would win. Because one person killed 105 people and one person 106 people, it was decided to restart the competition with 150 people. The report picture is the infamous "Hundred People Killing Competition" in the Nanjing Massacre. Real photo.

"When I think of my compatriots being slaughtered like cattle, my heart breaks." Gao Wenbin said, "As a Chinese, the only idea is to execute them."

Based on this discovery, the Chinese procuratorial team quickly collected a large number of reports on the same topic from many newspapers such as "Tokyo Nikkei", "Osaka Nikkei Shimbun", and "Osaka Asahi Shimbun".

This tragic killing was publicized as an honor by the Japanese government at the time.

"Tokyo Niichi Shimbun" continued to pay attention to it, the time and place were clear, the killing process and the numbers were clear and accurate, and the photos were also distributed, which became another hard evidence of the atrocities of the Japanese invaders.

Gao Wenbin immediately copied the newspaper in three copies, one left in the office of the Chinese Procuratorate, and the other two forwarded to the Nanjing Military Tribunal for the Trial of War Criminals.

After receiving the information, Shi Meiyu, the president of the court at the time, immediately reported it to the National Government. The National Government, through the allied forces, arrested the retired Noda Takeshi and Mukai Toshiaki and sent them to the Nanjing Military Court for trial.

Although they deny all the crimes they committed, they finally got a just trial before conclusive evidence.

In 1948, the two were executed at the Yuhuatai execution ground in Nanjing.

On August 17, 1948, after completing the work of the Chinese procuratorial team, Gao Wenbin returned to China with Xiang Zhejun.

They brought back two large boxes of the full set of court records of the Tokyo trial. One set was sent to the Ministry of Justice and Administration of the Nanjing National Government and the other set to the Law School of Soochow University. Unfortunately, both sets of records were later lost.

In November, Gao Wenbin learned about the final result of the Tokyo trial through newspapers, and the main war criminals received due punishment.

In 1952, Gao Wenbin was implicated by a teacher at Soochow University who was mistakenly labeled as a "special suspect" and was sentenced and sent to another place for rehabilitation for 27 years.

During the reform through labor, he insisted on studying and reading, and read the only readable English version of "Chairman Mao Quotations" countless times.

He continued to work hard and was promoted to professor in 1986. He retired in 1988 and was rehired to assume his original position.

In 1997, Gao Wenbin began to participate in the compilation of "Yuanzhao English-American French Dictionary".

This is a delicate, heavy and unpaid work.

What he is responsible for is the revision of the entries headed by A, D, and H.

Beijing sent the first draft after the English-Chinese translation to Gao Wenbin's home, and then regularly retrieved the revised draft.

The first drafts he asked him to review were all handwritten, which seemed quite laborious.

He reviewed each item meticulously, making corrections and comparing them, correcting and copying and pasting them on the samples.

He forgot to sleep and eat, and suffered a stroke due to overwork during the period. After being discharged from the hospital, he continued to devote himself to editing work.

In 2003, this dictionary was unanimously recognized by academic circles at home and abroad once it was published.

On the title page of the dictionary, Gao Wenbin's name was recorded.

In September 1985, through the introduction of Cheng Kewu and Wang Yiyuan, then deputy directors of the Ocean Ocean University of Shanghai Ocean University, Gao Wenbin joined the Chinese Democratic League and has his own political destination.

Since then, regardless of his advanced age, he actively participated in various alliance activities.

Even after he retired, whenever the Democratic League organized activities for retired members, he would rush to school to participate.

According to Mr. Jiang Zhiwei, the secretary-general of the Shanghai Maritime University Committee of the China Democratic League and the former executive vice chairman, “Lao Gao is an enthusiastic person. I interviewed him for the establishment of the school history museum, and he can talk about it. He has suffered. After a long period of unfair treatment, we have to admire that we can get out of the shadows and integrate into society so quickly."

"We must remember history, cherish peace, and unremittingly carry out patriotism education." This is a saying that Gao Wenbin often said.

He urged his students, no matter where they work, to remember that they are Chinese and to contribute to the dignity and interests of the country; he urged children abroad, "cannot do anything harmful to the motherland, such as violating this article , I will sever the father-daughter relationship with you."

Gao Wenbin tried his best to attend various activities to commemorate the victory of the Anti-Japanese War in China.

Before falling ill, he had been involved in the compilation of historical materials related to the Tokyo trial.

According to Professor Cheng Zhaoqi, director of the Tokyo Trial Research Center of Shanghai Jiaotong University and a member of the alliance, seniors have participated in many activities of the center and are very concerned about the research work of the center.

In 2016, the 95-year-old Gao, despite his faltering steps, insisted on participating in the commemoration of the 70th anniversary of the Tokyo trial. At that time, he also proposed the establishment of the "Tokyo Trial Memorial Hall".

In his later years, Gao Wenbin has always maintained the style of a Shanghai-style man, and spent his days living in his residence on the North Bund.

Wang Weiping, former deputy chairman of the Pudong District Committee of the China Democratic League, recalled that every time he visited Lao Gao, he was in his 90s and he always dressed neatly and combed his hair meticulously.

In the hot weather, Mr. Gao deliberately took out small towels and iced drinks from the refrigerator to the guests.

Since the 1940s, he has taken photos whenever there is a chance, leaving a lot of precious photos for future generations. 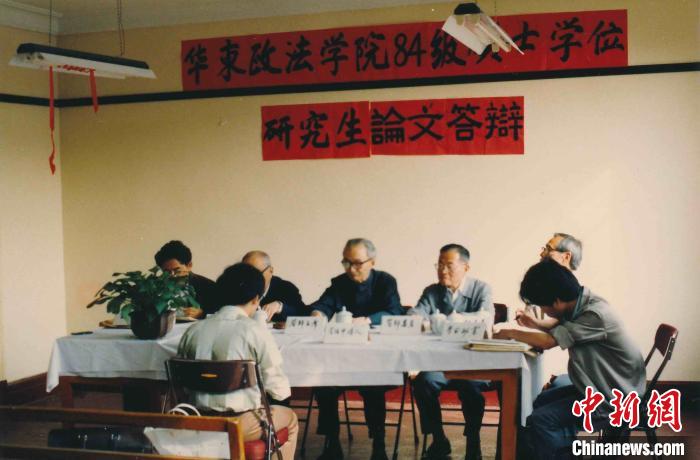 Life/Entertain 2020-09-07T11:59:33.615Z
The death of the last person who witnessed the Tokyo trial, Gao Wenbin, found the culprit of "Hundreds of People"-Chinanews.com

News/Politics 2020-09-13T12:47:59.873Z
The memorial meeting for Gao Wenbin, who witnessed the Chinese delegation during the Tokyo trial, was held in Shanghai 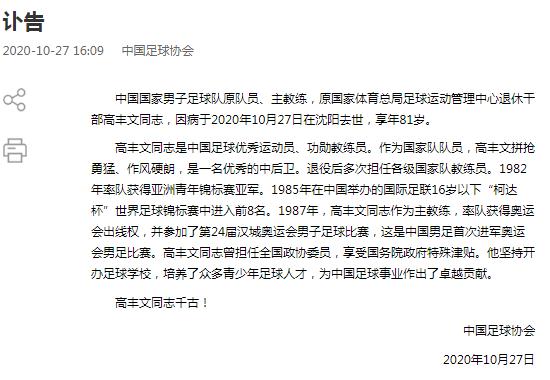