The actors of the Deyun Club caused troubles again due to controversial remarks. Where did the "word morality" and "artistic morality" go?

Chinanews client, Beijing, August 19 (Yuan Xiuyue) You should not eat rice, let alone talk nonsense. In the past two days, someone has caused controversy because of one sentence.   On August 18, the cross talk actor Zhang Shaowei of the Deyun Society posted a Weibo: "Friendly reminder: If you kill your girlfriend today, Qixi will be the first seven." Weibo screenshot   After this Weibo was p... 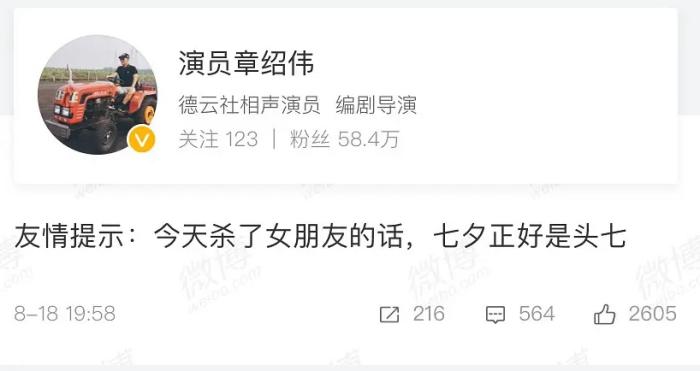 Chinanews client, Beijing, August 19 (Yuan Xiuyue) You should not eat rice, let alone talk nonsense. In the past two days, someone has caused controversy because of one sentence.

On August 18, the cross talk actor Zhang Shaowei of the Deyun Society posted a Weibo: "Friendly reminder: If you kill your girlfriend today, Qixi will be the first seven."

After this Weibo was posted, it caused discomfort to many netizens. As the controversy grew, Zhang Shaowei deleted the Weibo and posted an apology, saying that the joke was a big joke. It was originally a joke in the circle of friends. He didn't want to bring discomfort to everyone, so he would correct it if he knew it was wrong. "Thanks to some friends for their kind reminders, and some friends for their'good wishes'."

More people think that this is not a joke, and that "killing a girlfriend" can be regarded as a joke. It is not only disrespect for women, but also disregard for life.

Another netizen mentioned that this kind of remarks is no different from the "septic tank warning". It is a joke on other people's tragedies and brings panic to many women.

In July, the "Hangzhou woman disappearance case" aroused public attention. After investigation by the Hangzhou police, her husband Xu XX was dissatisfied with his wife due to conflicts in family life. He killed and threw his body into a septic tank while his wife was asleep.

However, when the water came out, some people used "septic tank warning" and "two tons of water" to ridicule and play tricks. Subsequently, the Douyin platform has removed more than 170,000 malicious play stubs and other illegal comments, and cleared more than 30,000 illegal videos and more than 350 illegal topics.

The tragedy of a lady has become the material for others to ridicule.

In fact, similar "journeys" like "Killing a Girlfriend for Chinese Valentine's Day" have been circulating on the Internet for a long time, and many netizens echoed it and called it funny. Zhang Shaowei mentioned in the apology that it was a big joke, which implicitly meant that he was not malicious, but why so many people did not buy him?

Friends who often watch comedy should know the saying "Comedy is the art of offense." In TV shows, we can indeed see that many people use offense to deconstruct authority and controversy, resulting in "laughing fruit." However, offense and malicious jokes are still very different. The most important basis for distinguishing is whether they challenge public order and good customs.

Those who play with the "septic tank warning" do not put life first, but from the standpoint of men and women, and stand in the same position as the male suspect in the "Hangzhou Woman Disappearance Case", and ignore it. The bad nature of the case and the tragedy of the victim. Maybe the stubborn people were just ridicule, but the actual message is a threat to women.

"Killing a girlfriend for seven days" can also make women feel uneasy, because in many people's eyes, the situation described in this sentence is likely to happen in reality, and the connection is not humor but fear. For men, is also like this. Secondly, what is so funny about this sentence? Its "baggage" comes from a hypothetical criminal act. If everyone agrees that this is a joke, it is easy to blur the moral and legal concepts of some people, induce social violence factors, and make the joke a tragedy.

There is a degree of jokes, and there is also a limit to shivering. Comedians are also public figures. They should be responsible for what they say. Don't mistake malice for jokes, and don't let laughter turn into scolding. (Finish)