Emirati “knights” in combating “Corona”: fatigue will go away with “zero injuries”

The circumstances of facing the Coronavirus pandemic imposed various types of humanitarian initiatives, in which many of the nation’s youth were involved, since the first days of the outbreak of the epidemic, and the launch of national survey centers and new mobile hospitals in various Emirates, as a contribution to support the state’s efforts to overcome 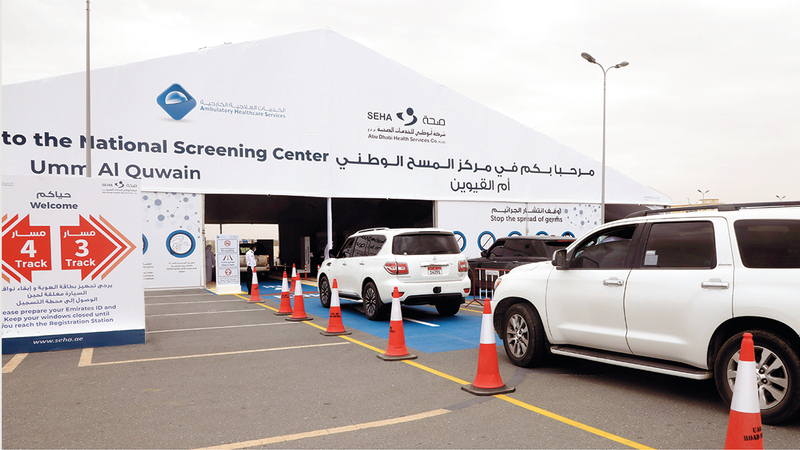 Doctors, celebrities and heroes are on the front lines among the volunteers

Emirati “knights” in combating “Corona”: fatigue will go away with “zero injuries”

The circumstances of facing the Coronavirus pandemic imposed various types of humanitarian initiatives, in which many of the nation’s youth were involved, since the first days of the outbreak of the epidemic, and the launch of national survey centers and new mobile hospitals in various emirates, as a contribution to support the state’s efforts to overcome this crisis that has imposed Unprecedented challenges, followed by proactive steps that contributed to the decline of the virus, and the celebration of the closure of many field centers and hospitals, pending the final receding of the epidemic.

"Emirates Today" met a number of volunteer knights, to get to know the roles in which they participated, and the details of the experience they went through in combating Corona, months ago, and for long hours throughout the days of the week away from their families, stressing that all fatigue will disappear with the announcement of zero injuries .

For his part, Faisal Al Ketbi, the world champion in Jiu-Jitsu, stopped on his experience in volunteer work, as he was the leader of a team that includes about 110 elite information technologists, integrated medical staff and a number of workers in the field of guidance and information, since the middle of last March.

He explained: “I benefited a lot from my specialization in the field of leadership to discover in this crisis that it is an act in which all experiences and efforts are united to serve the country, and whatever the methods differ, the goal remains one, which is to confront the epidemic and limit its spread in all ways.” Adding: “I learned a lot from this experience. Which introduced me to the power of managing the Emirati people and their adherence to life, and I closely follow the medical staff and all the teams working in this crisis, and their dedication to community service.

He stressed, "Despite all the circumstances I have been through and my four-month separation from my family and family, I feel optimistic today, especially after my experience with the volunteer team, which includes 75 Emiratis of various specializations."

As for Fatima Hassan Al-Saiqal, who started her career with volunteering some years ago, she said: “At the beginning of last April, I joined the Emirati Marshal program to volunteer in the field of remote management, and my role was to manage volunteers and organize them according to the geographical locations of each center. In addition to organizing tables, entering data and volunteering hours, and supervising all administrative matters related to them.

"I was interested in managing the affairs of a large number of volunteers in the field hospitals of the Department of Health in Abu Dhabi, and here I do not deny my feeling of fear at the beginning, especially with the beginning of the opening of the survey center, but my family encouraged me to go through the wonderful experience that means a lot to me."

Fatima explained: "Besides my remote work, I made sure to be in some centers to check on volunteers, to find out about their needs and to overcome potential obstacles that could face their field work."

For his part, Doctor Muhammad Al-Akbari indicated that the conditions for his current joining of the volunteer work team at the distinguished “Covid-19” assessment center at the Abu Dhabi Exhibition Center, after working for a period at the Bahia National Survey Center, since the beginning of last March, came after he joined only one month. To work in a company «Daman» Sheikh Khalifa Medical City.

Regarding his duties and his experience in general, he said: “I am currently assuming the duties of the deputy commander of the volunteers at the Excellence Center, and my main goal is to deal with people and relieve feelings of anxiety and fear from this emerging virus, as I work 12 hours a day, seven days a week, away from my family and my children. The three for more than three consecutive months ». And he considered that “the joy of giving, exerting effort and time, and discovering new friends from the Emirati medical teams and other volunteers, is my greatest asset.” As for the long months of fatigue, their effects will disappear with the near announcement of the zero case for injuries, God willing, and this meeting is an opportunity to thank our government and our leadership for all the efforts it has made with all spectrums of the UAE society to confront this global pandemic.

Fight fear with a smile

Despite Ali Bin Kamal Al Balushi's success in providing events and festivals, and his position as one of the “social media” celebrities, he initiated the volunteer work, in which he chose the logistical support approach in the field hospital in Dubai Parks, by supervising the public services packages provided to the injured, before To celebrate the closure of the field center and the recovery of all cases in it, after which Al-Balushi moves to Al-Masoudi Center in Abu Dhabi, which specializes in conducting special examinations for employees of government departments.

Al-Balushi stopped upon Ayesh's experience, its details, through his supervision of the treatment of members of his family who were infected with the emerging virus, which imposed special circumstances on him, which he described, saying: “About 50 of my family were injured, so I had to turn a whole house into a health center, in which I was performing the task of delivering food and treatment. To my relatives throughout their isolation period, which ended with their recovery ».

Regarding the funny situations that I encountered while performing his patriotic duty, he referred to the story of an elderly man who came to the survey center, and he showed signs of anxiety and tension, and his initiative quickly intervened to dispel the elderly’s fears with laughter: “I asked him to smile. Our worries and our fear and the fear of all the center’s auditors in it. ”

While Saif al-Dhahab said: “It is certain that I will tell my children and grandchildren this exceptional human experience that I went through, in which I was with the first line of defense to protect our homeland from this epidemic.”

He added: “I think that after the experience, I have become more able to assume responsibility, and face life’s various pressures and surprises, and I believe that this crisis has inspired Emirati youth, and contributed to the solidarity of everyone and their standing side by side with other groups of society, whose commitment to home isolation, and their follow the procedures. The precautionary measure has played a major role in defeating this pandemic ».

Fatima Al Khaja, a Bahraini resident in the UAE, who studies psychology at Zayed University, said: “I feel that the UAE has given me a lot and it is time to return the favor, and this is what motivated me to volunteer in previous events, before I had the opportunity to join the volunteer program to be part of the team administrators Supervisor of administrative issues related to centers ».

She stressed the value of this lofty humanitarian message that Emirati youth have consecrated since the outbreak of the pandemic and which it is today consecrated, as an expression of loyalty to the Emirates, which has embraced its dreams and aspirations.