In a report dated July 10, scientists call for a mandatory quarantine on entry to French soil. A recommendation that was not followed by the government 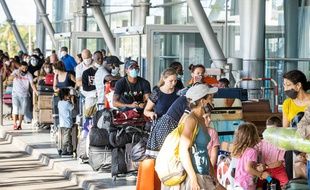 Since August 1, France has stepped up its Covid-19 screening system at its airports: mandatory tests for certain travelers, formalities to be completed and quarantine recommended. Measures not strict enough to the taste of the Scientific Council, which on July 10 gave a somewhat different opinion on the subject, reveals Le Parisien .

In this document, published only on August 3 on the website of the ministry, scientists recommend a mandatory PCR test before the flight for travelers from countries classified as "red". These people “isolate themselves before boarding, present their negative RT-PCR result on arrival, and continue this isolation on arrival in France”. Total duration of isolation: 14 days, even in the event of a negative result. “This measure is the simplest in organizational terms,” writes the Scientific Council.

Recommendations that were not followed by the government. Prime Minister Jean Castex, who had yet had this report since July 10, announced last week a generalization of tests on arrival, for travelers coming from 16 countries "where viral circulation is particularly strong", including United States, Brazil and Algeria. But no compulsory isolation period.

Travelers "should only leave their address in France, an email, a telephone number and limit their contacts while awaiting results, within 36 hours," recalls Le Parisien . The daily questioned the Ministry of Health on the subject, which claims to see no difference: “For people arriving from countries at risk, the voluntary fortnight remains the rule. "

Coronavirus: 30,294 deaths recorded in France, including 29 additional deaths in hospitals