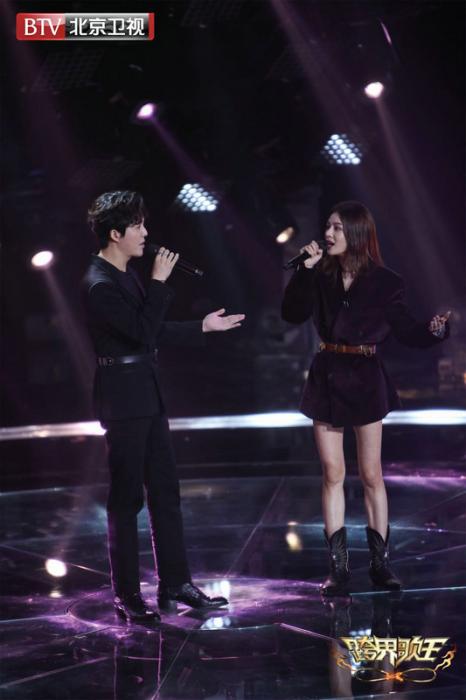 Produced jointly by Beijing Radio and Television Station and Tencent Music Entertainment Group, Shounong Food Group’s Sanyuan 72℃ Premium Fresh Milk is exclusively named, Baxi, Guchuan, Dahongmen, Wang Zhihe, Yunong, Liubiju, Yuesheng The fifth season of Beijing Satellite TV's large-scale music program "Crossover Singer" supported by Zhai Strategy will continue to sing this Saturday with a wonderful upgrade! As the schedule became more fierce, crossover singers released their big moves to launch a battle of strength that completely subverted the audience's previous impressions! In this episode of the program, Li Yundi, Zhong Chuxi, Ling Xiaosu, Tang Yifei, and Yu Yi will step out of the comfort zone and launch a fierce offensive against the King of Songs as challengers; while Chen Jianbin, Zheng Kai, Xiao Shenyang, and Li Xiaomeng will be ready to face the fierce opponents. Defend the throne, a "flammable and explosive" offensive and defensive battle is about to begin!

Li Yundi and Zhong Chuxi won the title of "Most Compatible Combination" in their cross-border singing and dancing. Ling Xiaosu, Tang Yifei, and Yu Yi were emotionally performing "Love Can't"

One of the biggest highlights of this issue is the surprise appearance of the international piano prince Li Yundi! Li Yundi partnered with Zhong Chuxi, who was defeated in the previous period, to interpret the classic song "Walk A Time" by singing and dancing. Not only did the two have a tacit understanding during the rehearsal, but the live performance was also called "the best combination" by Zheng Kai. However, after Li Yundi, who possesses "absolute pitch ability", after partnering with "Crossover Little Queen" Zhong Chuxi, why is it called by music critics that he "stands together to be pleasing to the eye and breaks down when he moves"? How will Li Yundi, who is renowned internationally, face such sharp evaluations? In addition, Wang Linkai “adding materials” on the spot, detonated the rap version of "Walk Back and Go". How will his performance blow up the audience, and how will Li Yundi comment?

In response to the criticism from the music critics of the previous program that "has no character relationship", Ling Xiaosu and Tang Yifei studied the role of characters in the Cross-Border Training Institute. In this qualifying battle, they joined hands with Yu Yi to pay tribute to the classics through the retro old song "If Without You", interpreting the entanglement of "not to be loved", and the wonderful immersive performance comparable to a musical, making Zheng Kai shout "I want Go to Paramount to watch the show immediately." Compared with Yi's professionalism and Tang Yifei's charming voice, music critics are rather "dissatisfied" with Ling Xiaosu's performance. They bluntly said that even though Ling Xiaosu has been trained by his wife, singer, and band, he still "sings the sadness into clang". Can Ling Xiaosu accept criticism from music critics?

In this program, the singer Li Xiaomeng changed the classical style of the past, through a very difficult "Inflammable and Explosive", to output the unyielding power of young women, and to convey the value awakening of modern women-"This world wants women to change It has to be gentle, kind, respectful, temperate, and patient, but women also have moments when they want to shout and scream." Although the song is extremely difficult, Li Xiaomeng's explosive voice and blasting performances still won the praise of everyone.

The singer Xiao Shenyang, who was challenged for "looking handsome", will bring the super-high pitch technique song "It'll Be Alright" in this issue. Xiao Shenyang, who has given full play to his treble advantage, not only "sings to tremble" live, but also wins Wang Linkai. "Rainbow" triple: "Very strong, crazy, and explosive, it inspires my blood!" How did singer Xiao Shenyang and Li Xiaomeng convey their voice through singing and reshape the stage image? Can they succeed in defending the challenge?

In the last issue, Zhong Chuxi, who was under the throne of pk, boldly subverted herself in the battle for the throne in this issue, and truly "stepped out of the comfort zone"! A punk costume sang the song "I'm still young" and "A-turned" the audience, and even "roared" out of the heart to shout-"As long as you don't forget your original intention, you can do it anytime, and you can pursue the unfinished things!" Zhong Chuxi Boldly subverting, being evaluated as "completely found myself", and receiving praise from music critics and song kings, can Zhong Chuxi, who performed outstandingly, successfully regain the throne this time?

Ling Xiaosu and Tang Yifei chose an affectionate and gentle song "I Really Love You", which is full of their sincere love. Ling Xiaosu said frankly that “his singing can only please himself, not others”, but he also said that singing is a particularly beautiful thing, and he is not afraid of embarrassment on this stage. In the face of her husband's frankness, his wife Tang Yifei said that she was "shameful" to accompany her husband by "gritting his teeth". The "fairy love" of the two moved the audience, and it was highly praised by music critics, "I saw love in their songs." I don't know if this love will help them succeed in becoming the best singer? let us wait and see!

Crossover singers have the courage to step out of their comfort zone to meet new challenges. What wonderful stage presentation will they bring to the end? In this gunpowder-flavored offensive and defensive battle, who will have the last laugh from the thorns? Bravely cross, the king is born fearless! Forge ahead, life is more than that! During the prime time of this Saturday night, the fourth issue of "The King of Cross-Border Singer" of Beijing Satellite TV hits, so stay tuned!