Three good reasons to watch season 12 of "RPDR" on Netflix 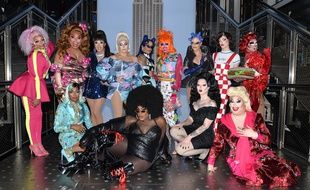 The candidates for the twelfth season of RuPaul's Drag Race, in New York, in February 2020. - Anthony Behar / Sipa USA / SIPA

The impatient, who followed season 12 of RuPaul's Drag Race this spring at the rate of its broadcast on the American channel VH1 already know the winner. But those who have not resorted to illegal downloading and have remained safe from spoilers, are dying to discover who succeeded Yvie Oddly in the charts of the most famous drag-queens competition. The suspense ends this Friday: the fourteen episodes are now available from Netflix France.

Twelve candidates are in the running to win a year of makeup Anastasia Beverly Hills, the title of "American Drag Queen Superstar and, incidentally, the 100,000 dollars promised to the winner.

On filming, however, there were thirteen in the race. Just before the broadcast of the first episode, in the spring, the production announced the disqualification of one of them. Sherry Pie - Joey Gugliemelli in civilian life - admitted to having asked, under a false identity, several young actors to send them videos of themselves, of a sexual nature, assuring them that this could help them to drop out. a role in a play. Result: the time it takes for Sherry Pie to appear on the screen is reduced as much as possible and sometimes the editing of an episode completely skips her ...

The cuts would go almost unnoticed as the casting is raised this year. If, in previous seasons, some queens stand out from the start as the big favorites, it is much more difficult here to deliver their prognosis on those who will reach the final. To name but a handful: Jackie Cox and Jan stand out for their humor, Aiden Zhane, Crystal Methyd and Rock M. Sakura for their creative eccentricity, Gigi Goode, Jaida Essence Hall and Nicky Doll for their looks to die for catwalk . "The fact of being French and my aesthetics were assets, I would say," confided the latter to 20 Minutes in February. Because yes, Nicky Doll (Karl Sanchez, when he's not in drag) is French and has been living in the United States for a few years. It's up to you to see if you want to awaken your chauvinism ...

20 MINUTES❗️ EXCITED YET? #TEAMNICKY Oh well, since our Werk Room Entrance is already out - Here is my full fantasy @jpgaultierofficial heavily inspired entrance look. I wanted to wear my French pride on my shoulder with a twist. I am a queen, I am living in NYC but I have been here for only 4 years and I am a PROUD French immigrant and PROUD to be representing my people! I have been lucky to work with so many European designers to realize my visions this season, because I wanted to showcase talent from overseas as well. 🇪🇺🇫🇷 Outfit by @jan_eneskey and @daniltop Hat by @erikhalley using @louboutinworld Hair by @parizhair Nails by @theeditorialnail Photography by the one and only @jonophotography ENJOY THE FIRST EPISODE OF @RUPAULSDRAGRACE SEASON 12 TONIGHT ❗️

A good bundle of star jurors

If Michelle Visage, Carson Kressley and Ross Matthews remain faithful to the appointment to evaluate the candidates alongside RuPaul, several celebrities, as is the tradition, are also invited to give their opinion. And "star" is not an overused word. Without spoiler, let's mention Nicki Minaj, Robyn, Jeff Goldblum, Whoopy Goldberg, Robyn, Daisy Ridley or even Alexandria Ocasio-Cortez who became, in 2018, the youngest candidate ever elected to the American Congress (she was 29 years old). Some of these personalities are fans of the show (the reactions of the act Leslie Jones are legendary), others seem to discover a parallel universe of which they were unaware of the existence. In any case, this very chic set completes proving that RuPaul's Drag Race has become an archi-general public program - which should not make us forget that the art of drag is not limited to what is shown on the screen. .

RuPaul's Drag Race is one such program that has been disrupted by the coronavirus pandemic. If most of the episodes were filmed since last summer, the "reunion" (where all the cast, except Sherry Pie therefore, is found to debrief) and the grand finale were to be recorded in the spring. It is therefore in a confined version, via videoconference, that season 12 came to an end. This gives two episodes not trivial but very good all the same, creativity and originality perfectly compensate for the absence of audience and big stage.

"Being French in" RuPaul's Drag Race "is a blessing and a burden", says Nicky Doll