[NHK] The seal "Nico" at the aquarium in Toba City, Mie Prefecture, which was talked about as having a "look like an uncle" in the photo on the SNS, is now open to the public...

The face of the photo on the SNS, "It looks like an uncle," became a hot topic, and the seal "Nico" at the aquarium in Toba City, Mie Prefecture, has been open to the public and is gaining popularity.

At the Toba Aquarium in Toba City, "Nico", the male of the Baikal seal that was born in February this year, the face of the photograph posted on the SNS by the aquarium "looks like an uncle", attracting attention on the net etc. It was

It is open to the public on the 100th day after birth, and is quickly gaining popularity among visitors.

Nico was raised by artificial nursing for about a month after birth, but now he has grown to 14.9 kg, which is four times the weight at birth, and he has been eating the shishamo and horse mackerel given by the keeper for two days. It was.

According to the aquarium, Niko flattened about two kilograms of food per day, which allowed him to perform a "handshake" technique in which he puts his hand over the hand raised by the keeper.

Yoshihiro Ishihara, Deputy General Manager of the Toba Aquarium, said, "I haven't had much experience with artificial nursing, so I'm glad that he grew up vigorously. I'd like you to come and see Nico's energy." 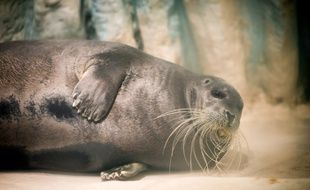