China News Service, May 23, according to the website of the Ministry of Foreign Affairs in Hong Kong, after the Third Session of the 13th National People's Congress announced that the establishment and improvement of the Hong Kong Special Administrative Region's legal system and enforcement mechanism for the maintenance of national security will be included in the agenda of the meeting, some cou... 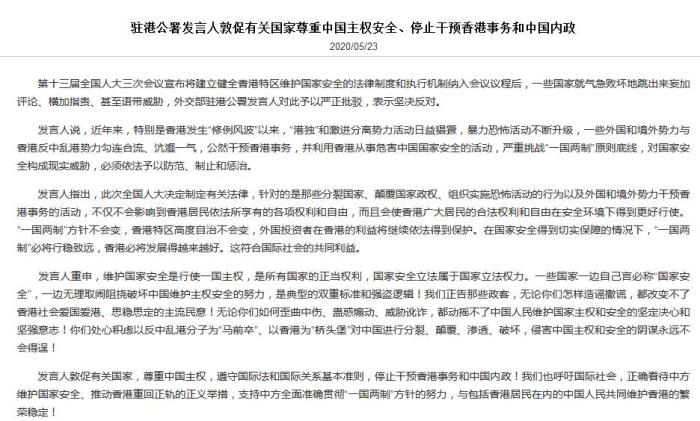 China News Service, May 23, according to the website of the Ministry of Foreign Affairs in Hong Kong, after the Third Session of the 13th National People's Congress announced that the establishment and improvement of the Hong Kong Special Administrative Region's legal system and enforcement mechanism for the maintenance of national security will be included in the agenda of the meeting, some countries were anxious Jumping out of reckless comments, accusations, and even threats, the spokesperson of the Ministry of Foreign Affairs Office in Hong Kong categorically rejected this and expressed firm opposition.

The spokesman said that in recent years, especially since the "revision storm" in Hong Kong, the activities of "Hong Kong independence" and radical separatist forces have become increasingly rampant, and violent terrorist activities have been escalating. Some foreign and foreign forces have joined forces with Hong Kong's anti-China chaos. He stubbornly intervened in Hong Kong affairs and used Hong Kong to engage in activities that endangered China's national security, seriously challenged the bottom line of the principle of "one country, two systems", and posed a real threat to national security. It must be prevented, suppressed and punished according to law.

The spokesman pointed out that the decision of the National People ’s Congress to enact relevant laws is aimed at those who split the country, subvert the state power, organize terrorist activities, and foreign and foreign forces intervene in Hong Kong affairs, which will not affect Hong Kong residents in accordance with the law. The rights and freedoms enjoyed will also enable the legal rights and freedoms of Hong Kong residents to be better exercised in a safe environment. The "one country, two systems" policy will not change, the high degree of autonomy of the Hong Kong Special Administrative Region will not change, and the interests of foreign investors in Hong Kong will continue to be protected according to law. Under the condition that the national security is effectively guaranteed, "one country, two systems" will surely go a long way, and Hong Kong will surely develop better and better. This is in the common interest of the international community.

The spokesman reiterated that maintaining national security is the exercise of the sovereignty of one country and the legitimate right of all countries. National security legislation belongs to the power of national legislation. While some countries must say "national security" by themselves, while unreasonably obstructing efforts to undermine China's efforts to maintain sovereignty and security are typical double standards and bandit logic! We are telling those politicians that no matter how you lie and lie, you will not be able to change the mainstream public opinion of Hong Kong society that loves the country, loves Hong Kong and thinks calmly! No matter how you distort slander, incitement, or threat of blackmail, you cannot shake the firm determination and strong will of the Chinese people to safeguard national sovereignty and security! You have been deliberately thinking of using anti-China chaos in Hong Kong as a "pawn" and Hong Kong as a "bridgehead" to split, subvert, infiltrate, and destroy China, and conspiracies that violate China's sovereignty and security will never succeed!

The spokesman urged the countries concerned to respect China ’s sovereignty, abide by the basic principles of international law and international relations, and stop interfering in Hong Kong affairs and China ’s internal affairs! We also call on the international community to correctly view China ’s just measures to safeguard national security and push Hong Kong back on track, support China ’s efforts to fully and accurately implement the “One Country, Two Systems” policy, and work with the Chinese people, including Hong Kong residents, to maintain Hong Kong ’s prosperity and stability!

Life/Entertain 2020-02-28T16:33:25.400Z
The Office of the Ministry of Foreign Affairs in Hong Kong is telling US lawmakers to stop interfering in Hong Kong affairs and China's internal affairs in any way.

Life/Entertain 2020-02-29T13:51:25.841Z
The Office of the Ministry of Foreign Affairs in Hong Kong urges the U.S. to stop sheltering suspected criminals from harassing the country