114 days after being cut and wounded, Dr. Tao Yong returned to the clinic: the past is worth the effort 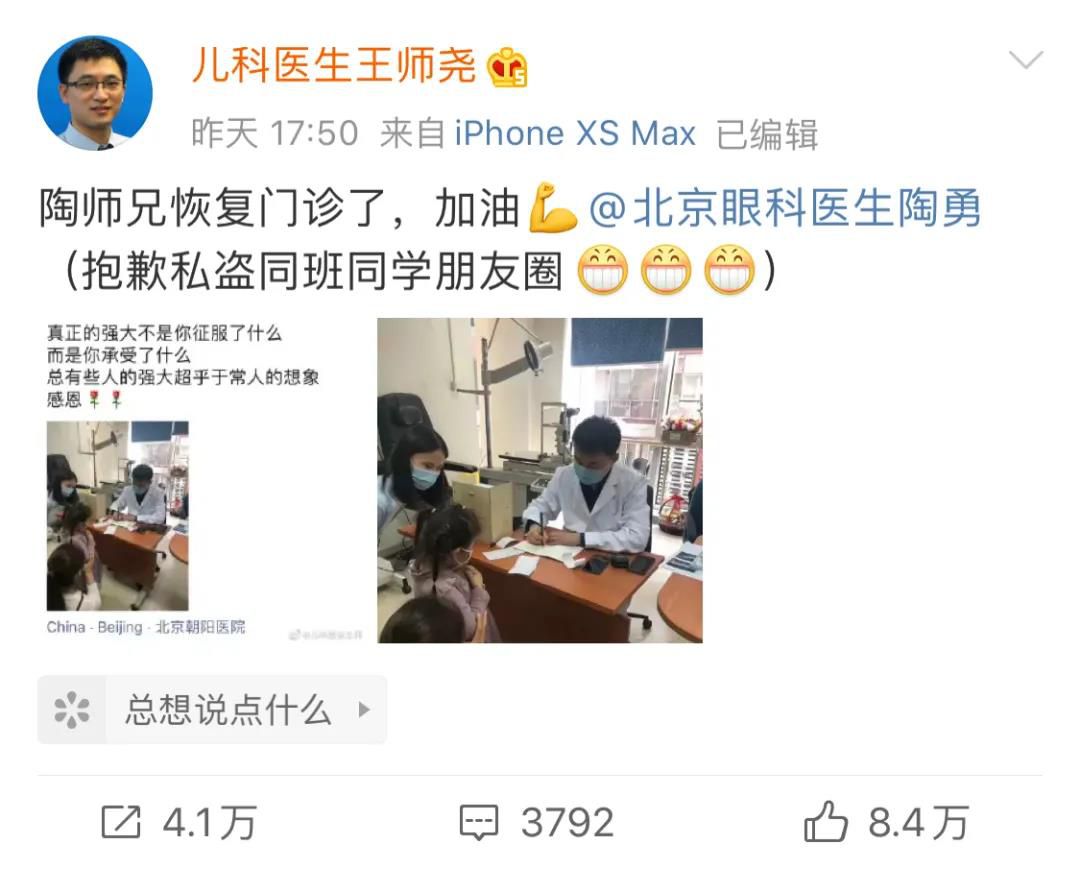 According to the news from @ 儿 医生 王 师 尧 微 博, Tao Yong, an ophthalmologist at Beijing Chaoyang Hospital, who was previously cut, resumed his visit on May 13.

"God saved me a life

Just to give me the opportunity to continue serving everyone "

Tao Yong, deputy director of the Department of Ophthalmology, Beijing Chaoyang Hospital, was admitted to the Peking University School of Medicine from Jiangxi. He studied under the authority of professor of ophthalmology, Li Xiaoxin.

On March 28, Tao Yong appeared on the live broadcast platform wearing a "ill-suit", this was his first time facing the public after his injury. In the live broadcast, he introduced his injury: "When I was awakened from general anesthesia, the director of neurosurgery said to me," It's almost a little bit worse. "There were three knives on his head. If the bone is broken and the brain comes out, the result can be imagined. There is also a knife cut on the neck, half a centimeter, and the spinal cord will be injured, which will lead to high paraplegia. There is another knife, which is only one centimeter away. Hit the carotid artery. "

Although suffering such a serious injury, Tao Yong said many times in the live broadcast that he still wanted to return to clinical work as soon as possible. He said: " I walked around the gate of the ghost gate, and God gave me a life, just to give me the opportunity to continue serving everyone. "

Seeing the flowers in the corridors "the past is worth it"

When I was transferred from the ICU to the general ward, Tao Yong saw the flowers in the corridor. The nurse said that he did n’t know who had sent them. He described the moment as “his tears are coming down”.

He said that in the process of treating patients, most people will be cared for. The doctors rescued the wounded and helped others while being recognized by most people. When they saw the flowers, they felt that their past efforts were worthwhile.

Only one month after discharge, Dr. Tao Yong returned to the clinic

On April 13, Dr. Tao Yong was discharged. When he was discharged from the hospital, his left hand remained unconscious, and he still needed to spend some time on rehabilitation every day. But no one expected that Tao Yong returned to the clinic only a month after being discharged. On the first day of May 13th, when he was "calm and moved", he said: " The patient who came to see me was either carrying fruit or carrying flowers. "

Tao Yong told reporters that he encountered a patient on the day of the visit. During the epidemic, his eyes developed particularly serious lesions. He had ran into many hospitals and was clearly unable to treat them. Finally, he came to him. If the operation is completed in Beijing, the patient needs to wait at least two weeks, so he helped the patient contact the hospital in Zhengzhou, Henan. " Although my left hand is not good, I am going to Zhengzhou next Tuesday to guide this operation. "

"There is always something beautiful that moves us"

In a previous interview, Tao Yong recalled the details of colleagues and family members of patients who blocked their swords one after another on the day of the incident. "If these people don't help me, I don't think I can escape."

Tao Yong said: " You will feel that there is a sense of courage in this world, there are really a lot of gratitude, and there are still many good things. Although there may still be many uncertain things in the future, but I think this will happen in the next life. Trip, it's worth it. "

Netizen: May Dr. Tao Yong be treated tenderly by the world

Really powerful is not what you conquer

But what did you suffer

Someone is more powerful than you think

May Dr. Tao Yong be treated tenderly by the world!