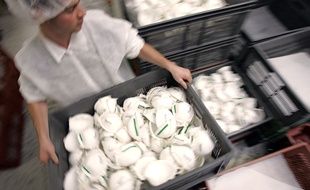 Image dating from 2005 of the factory for manufacturing protective masks in Plaintel. The factory closed in 2018. - F. Dufour / AFP

In Plaintel (Côtes-d'Armor), the hope of seeing the old mask factory revive begins to dawn. After the President of the Republic, who was traveling to Brittany on Wednesday, the government is also favorable to the fact that the revival project will materialize. “We are working on it. At this stage, we are making sure that it can succeed, "declared Monday the Secretary of State for the Economy Agnès Pannier-Runacher during a telephone press conference devoted to the production of masks in France. "What interests us is having an industrial project behind," she said.

The former Spérian factory produced a few years ago more than eight million masks a year. Its production capacity even exceeded 200 million masks in 2010. It was then the main factory of respiratory masks in France but closed its doors at the end of 2018, relocating part of its machines to Tunisia.

Former employees behind the recovery project

“We support all the production projects for surgical masks and FFP2 which are established and progressing. We make sure to help find the raw material, the machines and support in the authorization phases, ”said Ms. Pannier-Runacher.

Following the Covid-19 epidemic, the closure of the Plaintel factory came back to the fore. A small group of former employees, led by Jean-Jacques Fuan, former director of the site from 1991 to 2003, is trying to relaunch production, in the form of a cooperative society of collective interest (SCIC). The Brittany region has promised its support, provided that the State makes long-term commitments in terms of public procurement.

“We could sell 50,000 masks a day”… In Aise Breizh is crumbling under demand

"Tonight, my stock of masks will be gone ..." The rush for pharmacies has started