Astronomer Rafael Bachiller discovers in this series the most spectacular phenomena of the Cosmos. Topics of throbbing research, astronomical adventures and scientific novelties 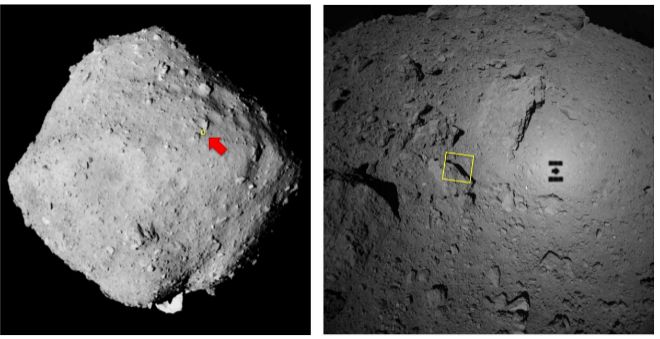 Astronomer Rafael Bachiller discovers in this series the most spectacular phenomena of the Cosmos. Topics of throbbing research, astronomical adventures and scientific news about the Universe analyzed in depth.

After collecting samples in the Ryugu asteroid, the Japanese space probe Hayabusa 2 has already embarked on its journey back to Earth. At the moment the mission is a success and a display of Japanese technology.

Three and a half years of one way trip

The Japanese space agency (JAXA) launched the Hayabusa 2 space probe ('Falcon 2' in Japanese) now 5 years ago, specifically on December 3, 2014, bound for Ryugu, a small rocky asteroid. The outward journey took three and a half years and the probe was placed in Ryugu's orbit in June 2018.

Ryugu seen from Hayabusa 2. On the right enlargement with the shadow of the probe. The yellow box is enlarged in an image below JAXA

This mission was the continuation of that first Hayabusa that had been launched in 2003 with the mission of collecting a sample of another asteroid, the Itokawa. Although the little robot he was carrying, 'Minerva', was lost in space when his landing was attempted, that mission was a success: Hayabusa was able to land on the Itokawa, take high-quality photographs and, what is more extraordinary, return to Earth in 2010 with a tiny sample of asteroid dust.

With the Hayabusa 2, the Japanese have wanted to take advantage of all the technology developed for that first ship, in a more perfected mission in which the French (CNES) and German (DLR) agencies have also collaborated by providing a small lander (MASCOT). This time, a new procedure has been devised to collect asteroid samples, using small projectiles.

Ryugu, the target of Hayabusa 2, owes its name to the sea dragon god of a Japanese legend. It is an asteroid of spheroid shape of about 875 meters in diameter. Its composition, rich in carbon, is conducive to contain possible organic materials, and this is of great interest to astronomers and astrobiologists.

The asteroid describes an orbit around the Sun of 473 days that is relatively similar to that of the Earth and at a distance similar to the Sun. This makes it possible for both bodies to approximate quite a few times which has greatly facilitated the logistics of The mission.

Although larger, Ryugu has similar characteristics to the asteroid Bennu, which is the target of the OSIRIS-REx mission. This NASA spacecraft, launched in 2016, is already in orbit of Bennu and, like Hayabusa 2, also aims to take samples of the asteroid. OSIRIS-REx will collect the regolith by deploying a retractable arm and the return of the probe to Earth is expected by September 2023.

In total, Hayabusa 2 carried four mini-robots for the exploration of the small asteroid. The first two (HIBOU and OWL) landed on the asteroid in September 2018; in October of that same year MASCOT landed, but it was only operational for 17 hours; finally, the MINERVAII-2 had a failure when it tried to separate from the ship early last month.

The three Japanese mini-robots of Hayabusa 2 are very similar to that Minerva that transported the first mission and was lost. Its shape, small flattened cylinders, is similar to that of the popular Danish biscuit metal boxes and its mass is just one kilogram. They are equipped with solar cells, cameras and remote control motors. As the asteroid has a very small gravity, these mini-robots can even take off on their surface and project at a distance following parabolic paths.

The mission reached its peak on February 21, 2019, when the Hayabusa 2 ship landed very briefly on Ryugu's surface, fired a small tantalum shell on the ground and, thanks to a collecting system, collected part of the Asteroid material that had come loose in the dust created by the impact. In April he fired another shot at the asteroid creating a crater and on July 11 he made a second sampling maneuver to collect material from the crater's subsoil.

All these maneuvers developed without apparent problems, so it can be expected that the probe caught a good amount of Ryugu's material. However, we will not know how much material was collected until the probe returns to Earth.

Once he has completed his mission, on November 13, Hayabusa 2 has reheated engines to begin his long journey back. At the end of December your ionic propellants will ignite and you will head to Earth, where we await your arrival at the end of next year. The Ryugu asteroid samples are packaged in a 40-centimeter size capsule that will be thrown with a parachute in the Woomera test field (Australia).

Next, Hayabusa 2 will continue its course through space and will be installed in a solar orbit. If the ship still contains enough fuel for its thrusters, it could perhaps be used again to fly over another asteroid (the so-called 2001 WR1) in mid-2023, but this possible prolongation of the mission is still undecided.

Hopefully the return trip will develop normally and the capsule can be collected in Australia successfully completing this fascinating space odyssey. Ryugu samples constitute a real treasure for the study of the origin of the solar system and the origin of life.

Animals End to the enigma of parrots: they are not clumsy, they throw food on purpose to improve their quality and quantity

Research Women who have made Spanish science great 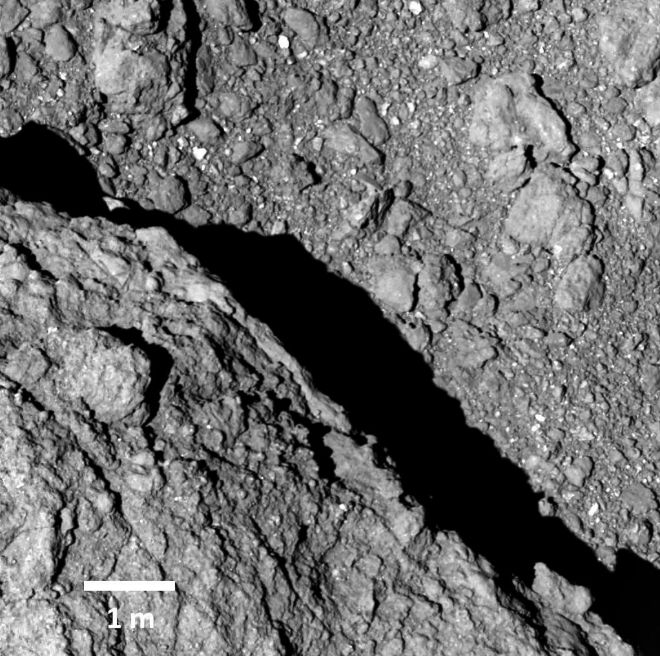 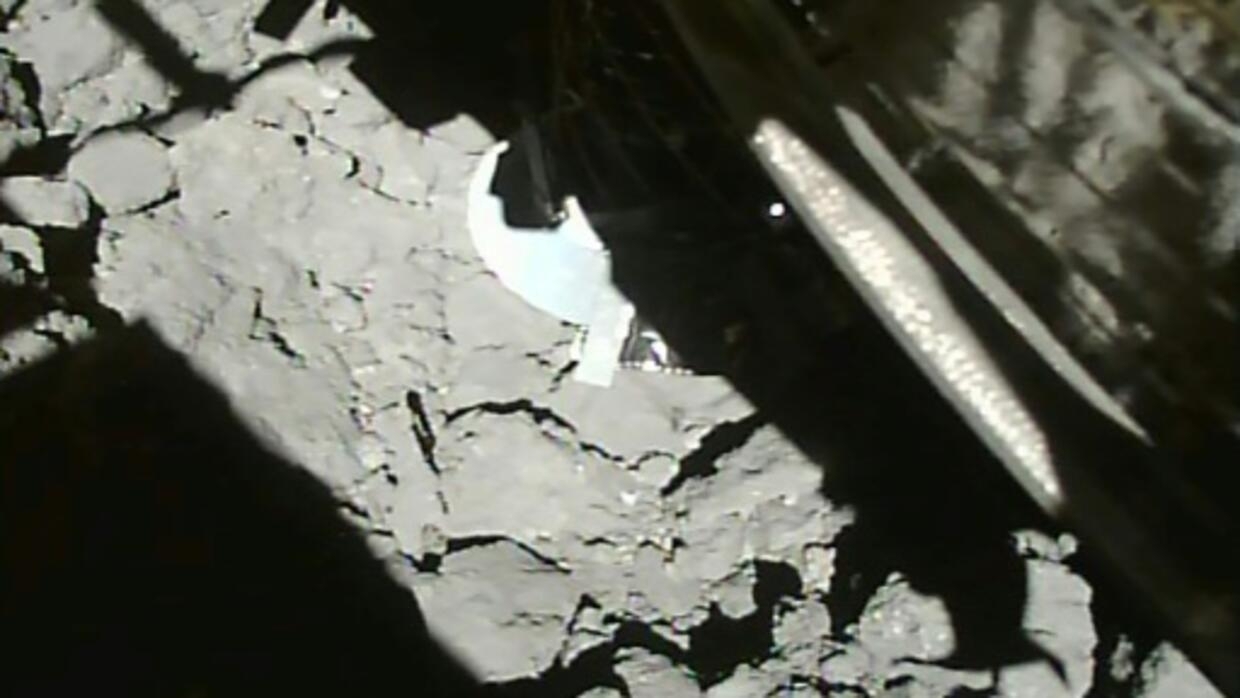 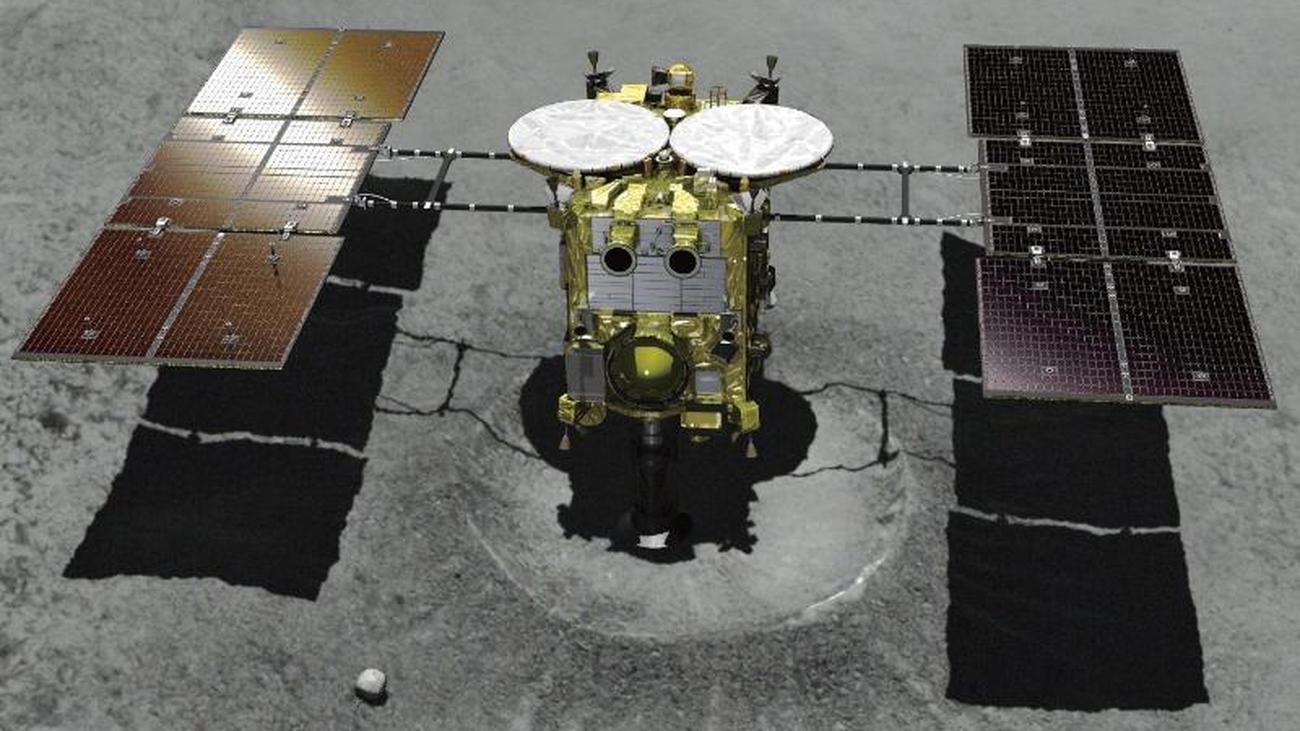 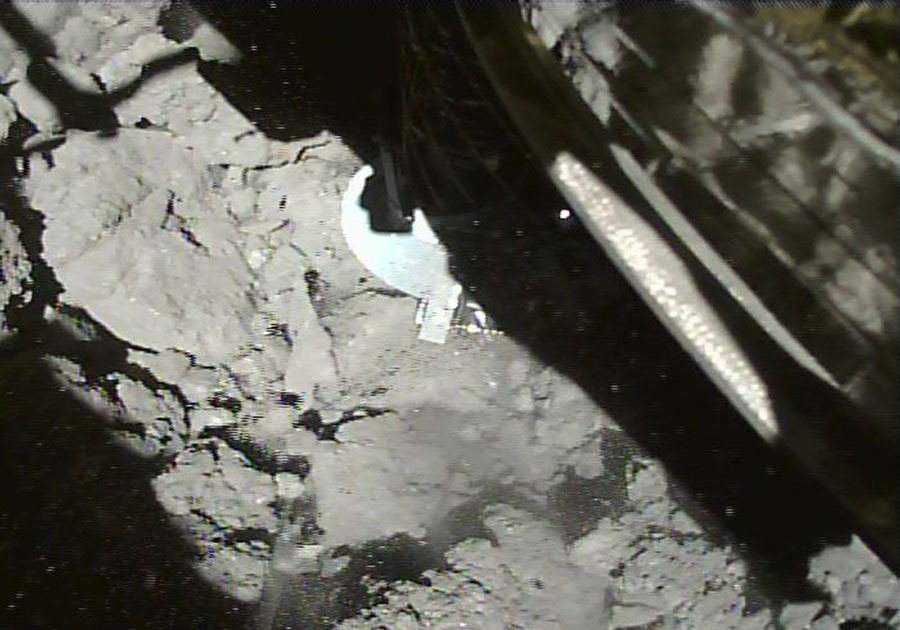 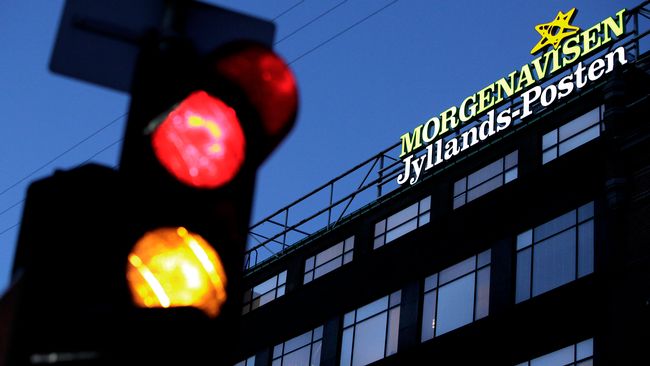 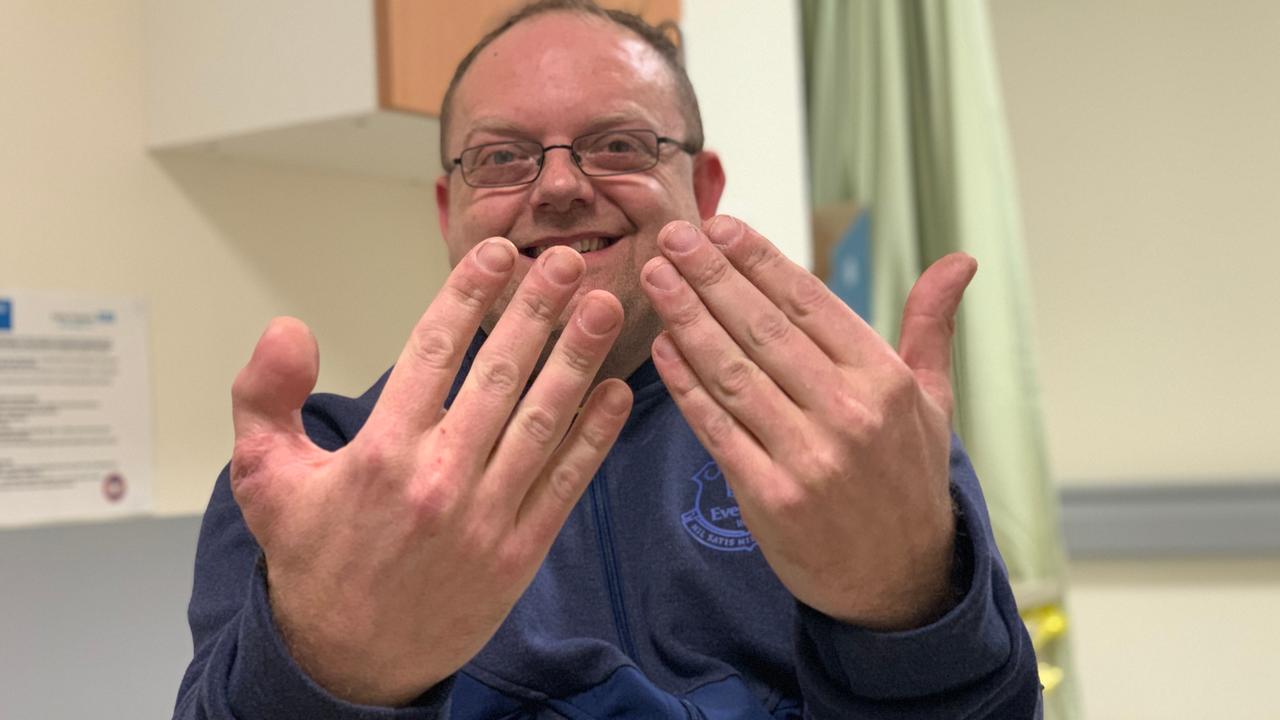 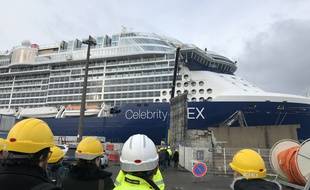 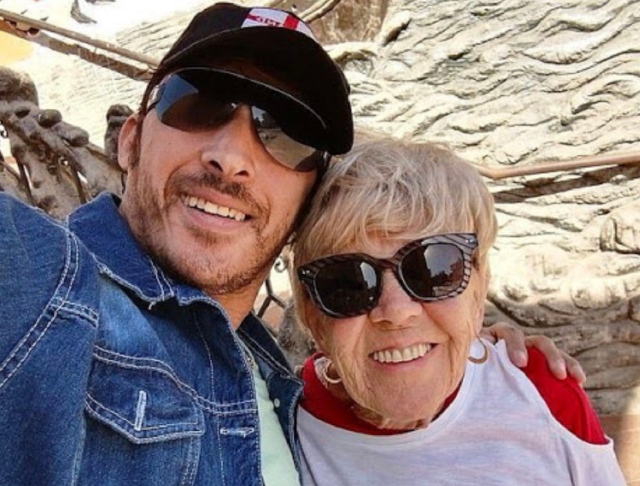 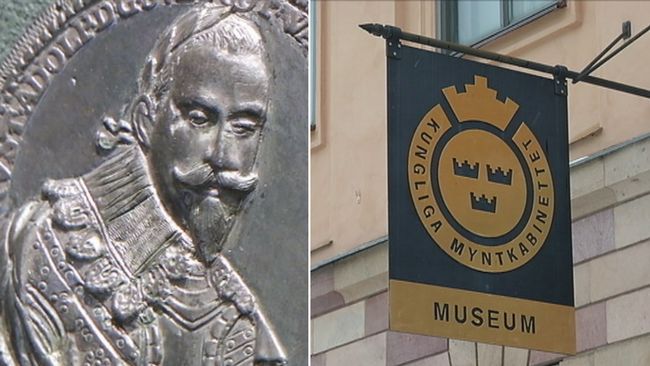 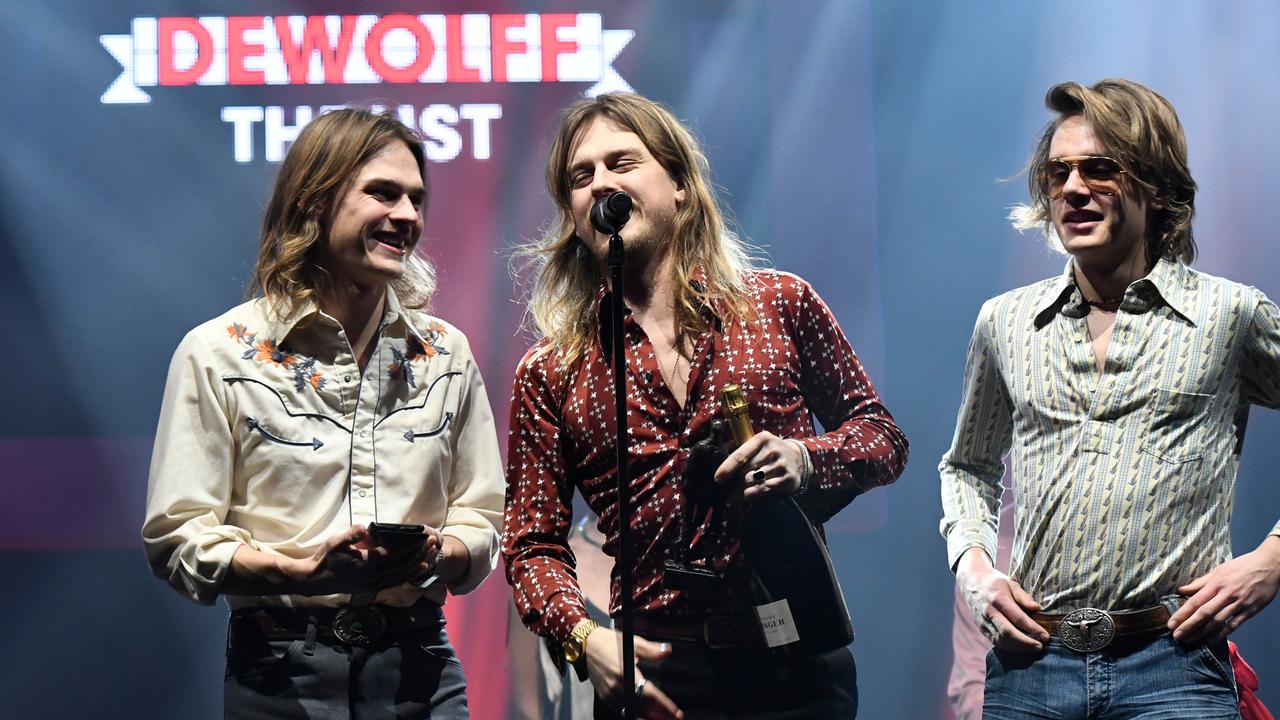