The controversial fashion of 'begpacking': begging for tourism around the world 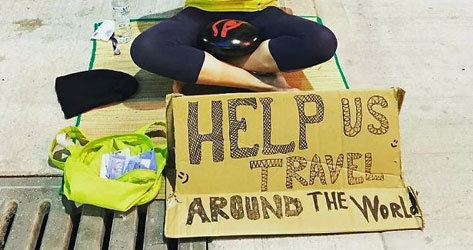 They have their own name: begpackers , an Anglo-Saxon term born from the combination of beg (meaning 'beg' in English) and packers ( backpackers ). Its proliferation by mostly underdeveloped countries ( Asia takes the palm, although it also extends to many parts of Latin America ) is not an isolated event, but more and more are those who point to this controversial fashion of begging to do Tourism Of course, neat and well dressed, with branded clothing if necessary.

The modus operandi is similar. Young people sit in the busiest streets of the destination with a sign explaining their intentions: continue traveling the world for what they ask for collaboration in the form of some coins. They are not worried that at their side, in many cases, they do ask for authentic beggars who need money to survive. Hence the outrage is manifested in these countries through local citizens and other tourists who do not see this practice as appropriate or moral.

That is why, on many occasions, it is they who denounce it on social networks by uploading photos and videos of these boys. "Why do you think the world should pay for the luxury of a holiday while the locals work hard to eat?" A local from Malaysia (@ lookingfor42) sentenced to see these young people act. On the other side of the scale there are Facebook pages like Begpackers in Asia in which the criticisms of these attitudes are fierce.

Different NGOs such as Save the Children, Intermon or UNICEF have also shown their "total disagreement". Even the authorities of many of these Third World destinations have been forced to intervene. This is the case in Indonesia (Bali, for example, is one of the favorite destinations of the begpackers ), where the police send these fake beggars to their respective embassies.

A couple of tourists sell postcards to continue traveling in Asia.

Setyo Budiwardoyo, head of Immigration of the island, has made it clear in a statement that "foreigners who run out of money or pretend to impersonate beggars will take them to their respective embassies." For now, they will not impose legal or economic penalties , but they do not rule out doing so in the future. Budiwardoyo added in statements to a local media that there are more and more cases of " problematic tourists , especially Australians, British and Russians", so Indonesia will stop covering the basic needs of foreign travelers , as it did until now to avoid "abuse."

Thailand, on the other hand, has modified the laws of entry to the country to avoid these fashions, so that tourists must show that they have an amount of 20,000 baths (about 570 euros) to spend at the destination. In South Korea , where begging is prohibited, there have also been cases of tourists caught in the middle of the street asking for alms by ignoring their illegality. Or they even deny that they are doing it to continue on vacation, arguing that they have been robbed or that they have run out of money.

There is another mode of begpacking, offering hugs (see Instagram image above), bracelets or hairstyles in exchange for some currency. There is more: juggling a baby at a traffic light to raise something, which led to the incarceration of the child's parents in Malaysia. There is also a lack of crowdfunding virtual pages such as Travel Starter or Fund My Travel where young Westerners encourage any citizen to pay for their vacations around the world via the Internet because, yes, because they are worth it.

BEER, recipes and a 1759 contract: this is the historical archive of Guinness

OPENING Superman's planet Krypton is in ... Almeria and you can visit it