Two Arab girls on two motorcycles in the «open road»

The original Fox Network in the Middle East will soon launch the first show of Open Road, the first of the network's productions. The six-episode show, which premiered on 13 February, will discuss the theme of travel, adventure and exploration, starring two young Arab women on the backs of two motorbikes. In 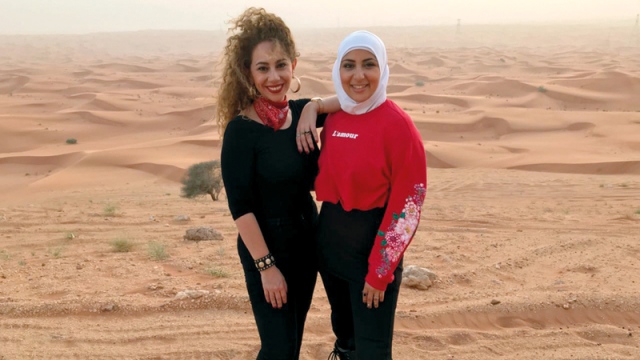 The six-episode show, which premiered on 13 February, discusses the idea of ​​travel, adventure and exploration, and is starring two young Arab women on the backs of two motorbikes. In a unique precedent, the premiere of "The Open Way" will simultaneously be broadcast on 11 channels across the region, and viewers will be able to watch the show at the same time through live broadcasts on Facebook and YouTube.

Along with Pamela from Lebanon, Shantal traveled from the United Arab Emirates (UAE, Lebanon and Jordan) to a unique journey on the back of their fiery rides, leading them to explore the customs, cultures and history of these countries and to discover that human relations and friendship are the true treasure. For the trip.

The show is the first of its kind to offer travel and exploration of the cultures of different countries from the perspective of Arab youth. It is based on a realistic narrative through a unique cinematography that allows the viewer to learn about the diverse cultures and natural resources of the Arab world. , Through the exciting adventures of the two action heroes, Chantal and Pamela, on their fire bikes.

"We are proud to present Open Road, the first Fox production in the Middle East," said Sanjay Rayna, General Manager and Vice President, Fox Networks Group. "The show heralds a new era in entertainment in the region and offers a bold youth experience through a wonderful narrative of events and photography. Which reinforces our vision of moving the entertainment industry in the region to a new stage where we offer local entertainment content, production that is presented to the Arab viewer and then to the whole world. "

"The program is accompanied by an exciting journey across the Middle East, from the perspective of the bold and adventurous Arab youth, who will be able to re-discover these areas and learn more about the roots of Arab cultures and cultures."

"The aim of the Open Road program is to break the stereotype, to celebrate Arab women and their unlimited ambition, and to emphasize the importance of their role in making a positive impact on society," he said. "The first season of the show is just a beginning." As far as the presentation of travel and exploration is concerned, it also focuses on the social relationships between Chantal and Pamela and the local population of each country, as well as the motorcyclists they meet along the way.

"We wanted to deliver a bold and fresh experience to viewers, so we are proud of the quality of the Open Road series produced locally with local Electric Films," said Alex Shami, production and production manager for Fox and National Geographic Abu Dhabi. Global Production ».

The local program offers travel from the perspective of Arab youth.