Spain has managed to go from being one of the European economies with the highest inflation to positioning itself as the country with the lowest price rise in November, of 6.6% year-on-year,... 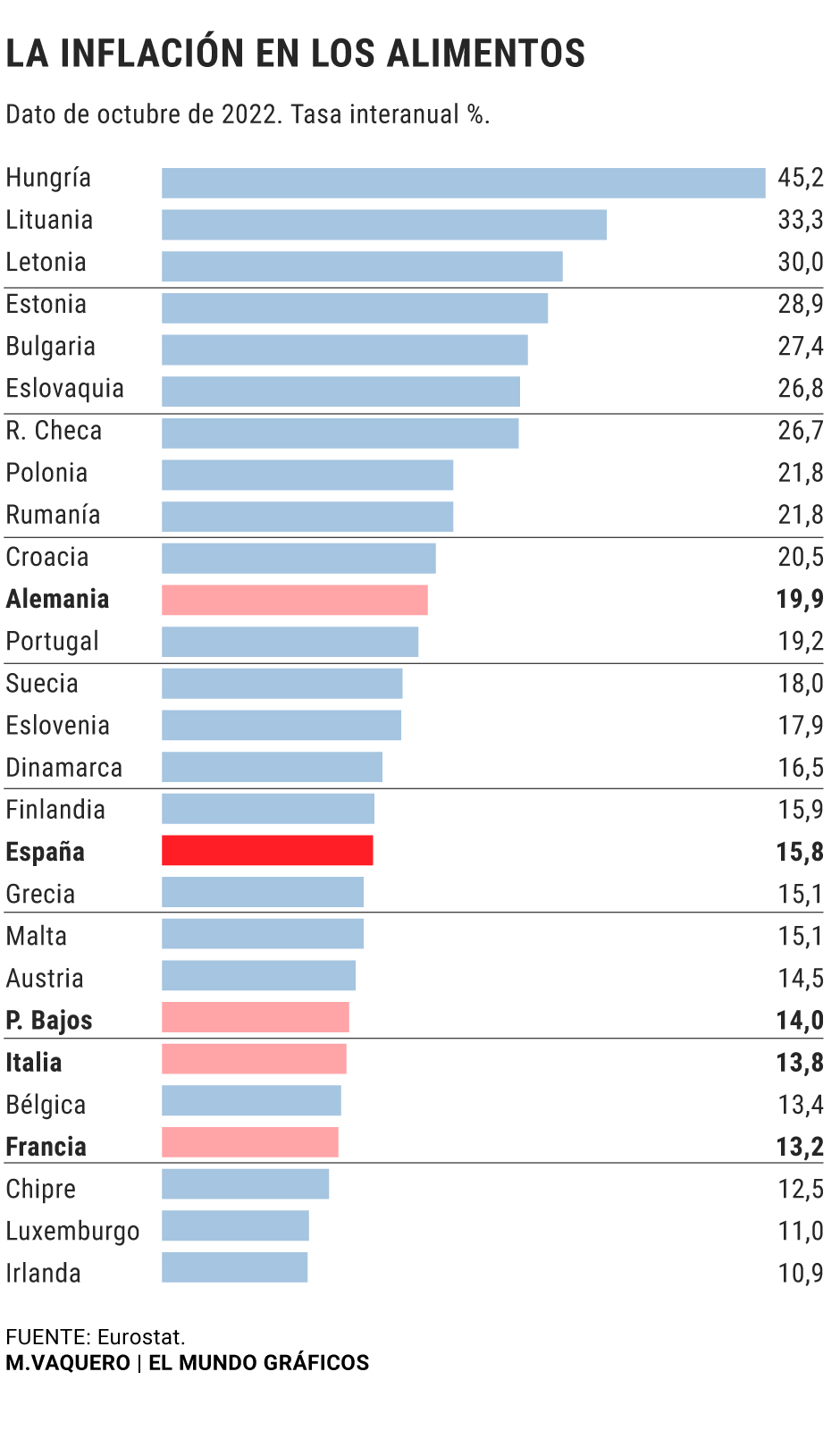 has managed to go from being

one of the European economies with the highest inflation

to positioning itself as the country with the

year-on-year, according to the harmonized data shared with Eurostat.

However, this relief from the rise in prices

has not been transferred to food

, where Spain is the leader among the great powers of the Union.

In the month of October, the last period for which the National Statistics Institute (INE) has provided data broken down by type of product,

compared to the same month last year, a

increase since 1986, which implies in practice that milk has skyrocketed by 25% in one year;

vegetables have become more expensive by 25.7%;

chicken is 18.3% more expensive than a year ago;

and rice costs 16% more than in 2021, among many other increases registered in the supermarket.

Of the five large economies of the European Union (Germany, France, Italy, Spain and the Netherlands -from highest to lowest volume of GDP-), our country ranks

second with the greatest problem of food prices

, where the shopping basket rose 19.9% ​​in October, according to Eurostat.

Despite the fact that Spain leads the increases in this group, it is in

the middle of the table

of all EU countries, in fact

the average for the continent stands at 17.8%.

The biggest problems of inflation in food are found in

Despite the fact that these are the averages by country, Spain is at the head of the five countries with the most economic weight -those that are comparable- in the price increase of many products.

25.5% in our country, while in German supermarkets they are sold 19.8% more expensive;

The same happens with

, which in Spain has shot up

while the increases in the rest are lower: in France, 7.9%;

In the face of Christmas, in which families increase their food expenses for the celebrations, the Spanish will also assume a higher price increase than their European counterparts in the

purchase of wine and beer

while the Germans will pay 7.6% more expensive;

Beer , for its part, has become more

In many other foods of daily life,

Spain is in second place

for increases in this group of five.

The same happens with

in the Netherlands they have risen by 21.9%;

In other products such as

the increases registered in the country are in line with those of our European neighbors.

food is a product with very little elasticity,

which means that as they are basic products that cannot be easily replaced by others -we need to buy them to feed ourselves- even though prices go up,

their demand does not suffer excessively,

difficult for prices to correct themselves.

For this same reason, food inflation affects all families, being especially detrimental to the purchasing power of

as these are the ones that allocate a

greater proportion of their spending

to making purchases in order to survive.

According to calculations by the Ministry of Agriculture, Spanish households spend around 15% of their income on food, a percentage that rises to 19.2% if families have an income of 1,000 euros or less and drops to 11% if they earn more than 5,000 euro.

These difficulties seem to become even more evident before Christmas, which is why the Government, aware of public concern, is preparing a

in which it will try to alleviate food inflation.

"All the ministers have indicated their same concern about food prices and the need to respond to them," said

, on Wednesday, who confirmed that the Government is "working on the review of the package of the whole of measures that will be approved before the end of the year".

The president, Pedro Sánchez, was the first to advance this novelty on Tuesday in Congress.

The option of approving measures to alleviate the rise in food prices comes to the fore again after the controversy unleashed in September, when in view of the increase in inflation, the second vice president,

the price be capped of staple foods,

leading to outright rejection from the food chain.

Now it seems that the measures would go in another direction.