Today's financial market was truly a 'Black Monday'. The won-dollar exchange rate rose by more than 20 won in one day and surpassed 1,430 won, which is a whopping 20% ​​jump compared to the beginning of this year. 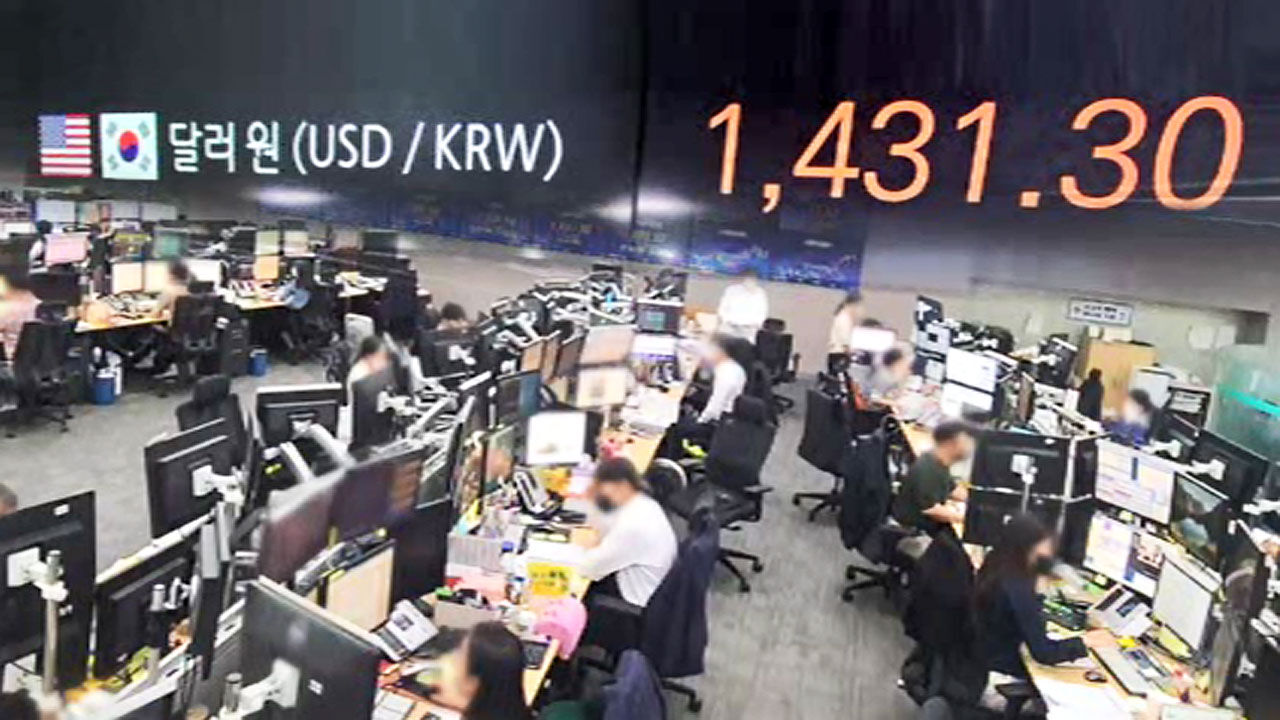 The won-dollar exchange rate rose by over 20 won in one day and surpassed 1,430 won, which is a whopping 20% ​​jump compared to the beginning of this year.

At the same time, the stock market plunged today and the KOSDAQ fell more than 5%.

Let's take a look at reporter Kim Jung-woo's report and analyze the situation.

Today, the exchange rate jumped as soon as the foreign exchange market opened.

It is known that the foreign exchange authorities have taken measures to defend the exchange rate, but it was not enough.

The entire Asian financial market, including Japan and China, was shaken together, but we are suffering more from the strong dollar as the real economy is also exposed to danger signals at the same time.

As such, it seems that the amount of dollars coming into the country is getting scarce, and it seems to be decreasing.

If the current account is in a deficit, the problem of the domestic dollar shortage may become bigger …

The stock market collapsed due to currency fears.

The KOSPI index fell more than 3%, dropping to the lowest level this year, and major stockholders Samsung Electronics and SK Hynix are breaking 52-week lows every day.

The KOSDAQ fell more than 5%.

With 95% of all listed stocks down, it was the largest drop in a 24-year history.

[Young-Moo Cho / Research Fellow, LG Business Research Institute: It is expected that the interest in the financial market is already shifting from inflation to the next economic recession.

Since the value of the dollar, which is a safe asset, is highly likely to rise, at least the strong dollar

phenomenon is likely to continue until the first half of next year.]

Although it is being considered as a countermeasure, it is evaluated that it is insufficient to overcome the strong dollar wave.

Q. A sharp rise in the exchange rate, will the won depreciate further?

Currently, the global financial markets are all unstable, so no matter what news comes out, it is necessary to buy a safe asset, the dollar.

Even today, the value of the British pound has fallen to its lowest level in history, so seeing this, not only the Korean won, but also the yen and the yuan rose, shaking the entire Asian market.

Looking at this situation, any investor should buy dollars in the future

Our private institutions and individuals have assets of about 700 billion dollars or 100 trillion won overseas.

This is because the proportion of individual investors and private financial companies investing in overseas stocks has increased that much.

He said that the situation would be a little better if the funds invested in those stocks were brought back to Korea.

So, when disposing of foreign stocks, a tax rate of over 20% is levied, and if we exempt this tax, we are pursuing this plan.

However, as you know, if you have invested in overseas stocks up to now, there are many cases of loss, so it is unknown whether you will sell it immediately and return.]

Q. Currency swap is the answer?

[Reporter Kim Jung-woo: It would be reassuring to have this.

Again, it's not an easy story.

Currently, the central bank of the United States is implementing intensive austerity policies that withdraw the dollar from the market to keep up with rising inflation.

However, if they sign a currency swap contract with us, they create another warehouse where they can release money in the market, so it does not fit their financial policies.

And from our point of view, there are also opinions that we are weak, and that we need to be careful as it can be an act to publicly inform that we are short of dollars.]