His Highness Sheikh Hamdan bin Mohammed bin Rashid Al Maktoum, Crown Prince of Dubai and Chairman of the Executive Council, stressed that the adoption of advanced agricultural technologies and the use of the latest smart technology in launching agricultural projects reflects the vision of His Highness Sheikh Mohammed bin Rashid Al Maktoum, Vice President and Prime Minister of the UAE. 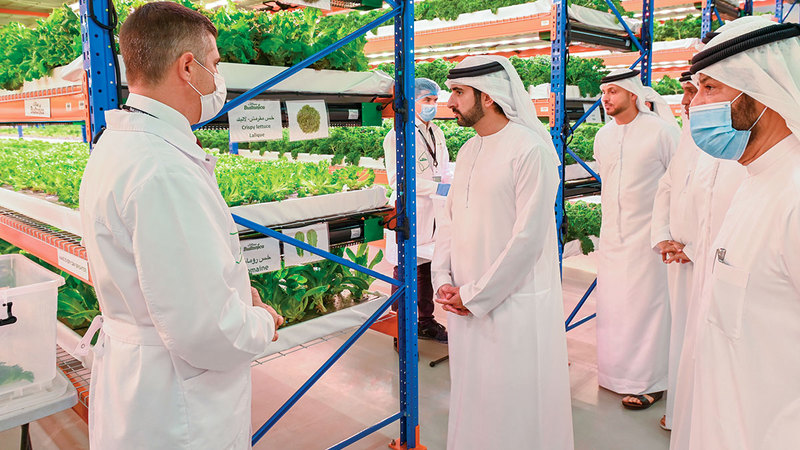 His Highness Sheikh Hamdan bin Mohammed bin Rashid Al Maktoum, Crown Prince of Dubai and Chairman of the Executive Council, stressed that adopting advanced agricultural technologies and employing the latest smart technology in launching agricultural projects reflects the vision of His Highness Sheikh Mohammed bin Rashid Al Maktoum, Vice President and Prime Minister of the UAE and Ruler Dubai, to achieve food security and self-sufficiency in our food needs, achieve the sustainability of our resources, double production and support comprehensive economic diversification based on knowledge.

His Highness praised the efforts of the creative people of the Emirates in various fields, including the agricultural field, through their ideas and projects that benefit from the latest and most advanced technologies, and follow the best international practices to increase the productivity of the agricultural sector and expand food production locally.

This came during his visit to the "Bostanek" farm in Dubai, the largest vertical farm based on hydroponics in the world, which Emirates Airlines recently announced its opening in Dubai with investments amounting to 150 million dirhams.

His Highness Sheikh Hamdan bin Mohammed bin Rashid Al Maktoum stressed that "promoting local production in the vital agricultural sectors is an essential pillar of the sustainable development of the UAE."

His Highness said: "The opening of the largest vertical hydroponic farm in the world is an important achievement that reflects the awareness of our national institutions about the most important development files, and their contribution to confirming the leadership of the UAE in various future fields."

His Highness praised the continuous development process that Emirates Airlines is witnessing at all levels, led by His Highness Sheikh Ahmed bin Saeed Al Maktoum, and its active role in accelerating the pace of economic growth through its continuous initiatives and integrated strategy to stimulate ideas and provide the appropriate atmosphere to launch pioneering projects that enhance Dubai's position as a global city keen on ensuring the elements of sustainability, prosperity and excellence.

His Highness said: "Emirates Airlines is a national frontier that we are proud of in its achievements and services that have enhanced its competitiveness among the largest and most prestigious international airlines by introducing new standards of quality in this field.

We are confident in the ability of our young cadres and national institutions to present and implement ideas that go beyond traditional frameworks to accelerate the pace of achievement and achieve the best results in various vital sectors.”

His Highness added in a tweet on Twitter yesterday: "I visited your (Bostaniak) farm in Dubai, the largest vertical farm based on hydroponics in the world, which was opened by Emirates Airlines with investments amounting to 150 million dirhams and a production capacity of up to one million kilograms of leafy vegetables annually. ».

During the visit, His Highness Sheikh Hamdan bin Mohammed bin Rashid Al Maktoum was briefed on the advanced technologies used on the farm, which represent an essential component of future smart agricultural societies and the advantages they provide to meet the needs of self-sufficiency in food, support a diversified economy based on knowledge and innovation, and achieve the objectives of the security strategy. food security by applying the highest standards of sustainability, to serve as the first building block for food security based on innovation.

His Highness was accompanied during the visit by the Chief Operating Officer of Emirates Airlines, Adel Al Redha, Board Member of "Bostanek", Mansour Falaknaz, and Director of Production at "Bostanek", Robert Velos.

His Highness listened to an explanation about the farm built on an area of ​​330,000 square feet near Al Maktoum International Airport at Dubai World Central, and the technologies used in it, which allow its production capacity to reach more than one million kilograms of high-quality leafy vegetables annually, while The smart technologies used in it contribute to reducing the water consumed in agriculture by 95% of the quantities of water needed by traditional agriculture, and other advantages, the most important of which is the availability of leafy crops throughout the year without being affected by climate change and seasons, with the farm having the ability to produce more than one million cultivated plants. at any given time, allowing it to produce 3,000 kilograms of fresh, high-quality leafy greens per day.

• «The opening of a farm (Bostanak) in Dubai reflects the vision of Mohammed bin Rashid to employ the latest means of smart technology to achieve food security and self-sufficiency in our needs».

"Bostanak Farm" relies on a continuous production cycle, which guarantees ultra-fresh and clean production, without the use of any pesticides or chemicals, while the farm is provided with a closed-circuit irrigation system, where water is recycled, which contributes to saving 250 million liters of water annually. , compared to traditional outdoor cultivation that produces the same amount of crop.

"Bostanek" will contribute to securing the supply chains of the Emirates Flight Catering Company, and ensuring that passengers on flights benefiting from the company's services, led by Emirates Airlines, enjoy high-quality food products, while consumers in the UAE will soon be able to purchase farm products, Which intends to expand the production and sale of fruits and vegetables.