13 dirhams, an increase in gold prices within 3 weeks

Gold prices continued their rise for the third week in a row, recording increases at the end of last week that ranged between 75 fils and 1.75 dirhams per gram of various karat, compared to their prices at the end of the previous week, according to the price indicators announced in the Dubai and Sharjah markets. 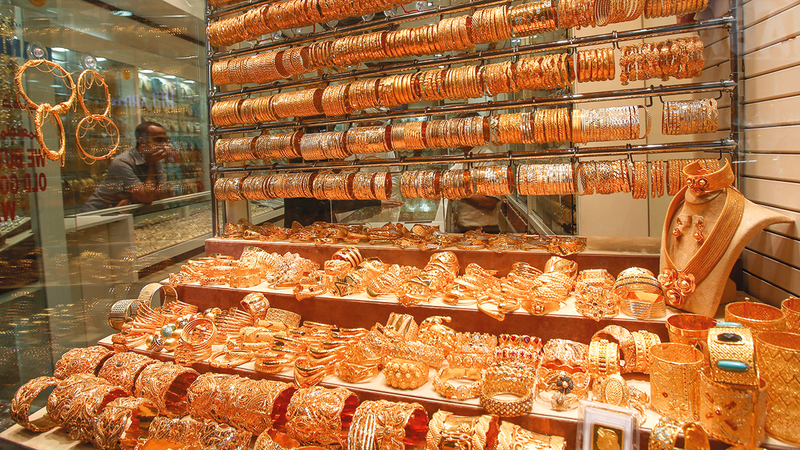 Dealers: Dealers are selling bullion to take advantage of the increases

13 dirhams, an increase in gold prices within 3 weeks

The markets witnessed a slowdown in the demand for gold jewellery.

Gold prices continued their rises for the third week in a row, recording increases of between 75 fils and 1.75 dirhams per gram of various karat at the end of last week, compared to their prices at the end of the previous week, according to the price indicators announced in the Dubai and Sharjah markets, bringing the total price increases per gram Within three weeks to 13 dirhams.

Officials of the gold and jewelry trade outlets told «Emirates Today», that the markets recently witnessed a demand from some dealers to sell gold bars and coins to take advantage of the price increases as the yellow metal continued to record high price rates, noting that the markets witnessed a slow demand for new works.

In detail, gold prices in the Dubai and Sharjah markets, at the end of last week, recorded increases, whose value ranged between 75 fils and 1.75 dirhams per gram of various carats.

The manager of the "Mashoom Jewelery" store, Raj Bahi, said that the continued high rates of gold, stimulated some dealers to sell gold bars and coins, with the slowdown in demand controlling the sales of new works.

Bahi added that the sale of bullion and coins to shops is still relatively limited, expecting that the demand for selling will increase in the event that gold prices continue to rise or stabilize at close to the current price limits.

For his part, the sales manager at the Diamond Jewelery store, Dilip Soni, confirmed that the most popular activity in the market is currently concentrated in the demand of a number of dealers to sell bullion products and gold coins to the stores, with the aim of taking advantage of the differences in price increases that the yellow metal has reached. finally.

He described the rates of demand for the sale of bullion and gold coins as "cautious", with many dealers anticipating future additional price hikes so that they accept selling at greater rates.

And the manager of the "Rikesh Jewelery" store, Rickish Dhann, considered that the focus of the turnout on the sale of bullion and gold coins with low weights and small and medium sizes for stores, indicates a state of caution in sales and contemplation of new price increases for gold in accordance with market expectations.

Dahnak said that the current purchases of gold jewelry are very limited in light of the persistence of prices at high rates and with the lack of activity of tourists during the summer season in the markets.

Gold is heading for the fourth weekly increase

Yesterday, gold prices fell globally, but they are still heading towards recording the fourth consecutive weekly increase, as the weakness of the dollar dispelled the impact of pressures caused by the increase in Treasury yields, as well as concerns about raising US interest rates.

Spot gold prices fell 0.1% at $1,787.83 an ounce, while the yellow metal is still heading for gains for the fourth consecutive week, up 1% in its longest weekly winning streak in a year, according to Reuters.