"Business left even at 6,990 won"... Cost controversy over 'cost-effective chicken' in supermarkets

It's friendly economy time. Reporter Han Ji-yeon is here today. I heard that a large mart recently released chicken for less than 7,000 won, and they say they sell a lot, now. 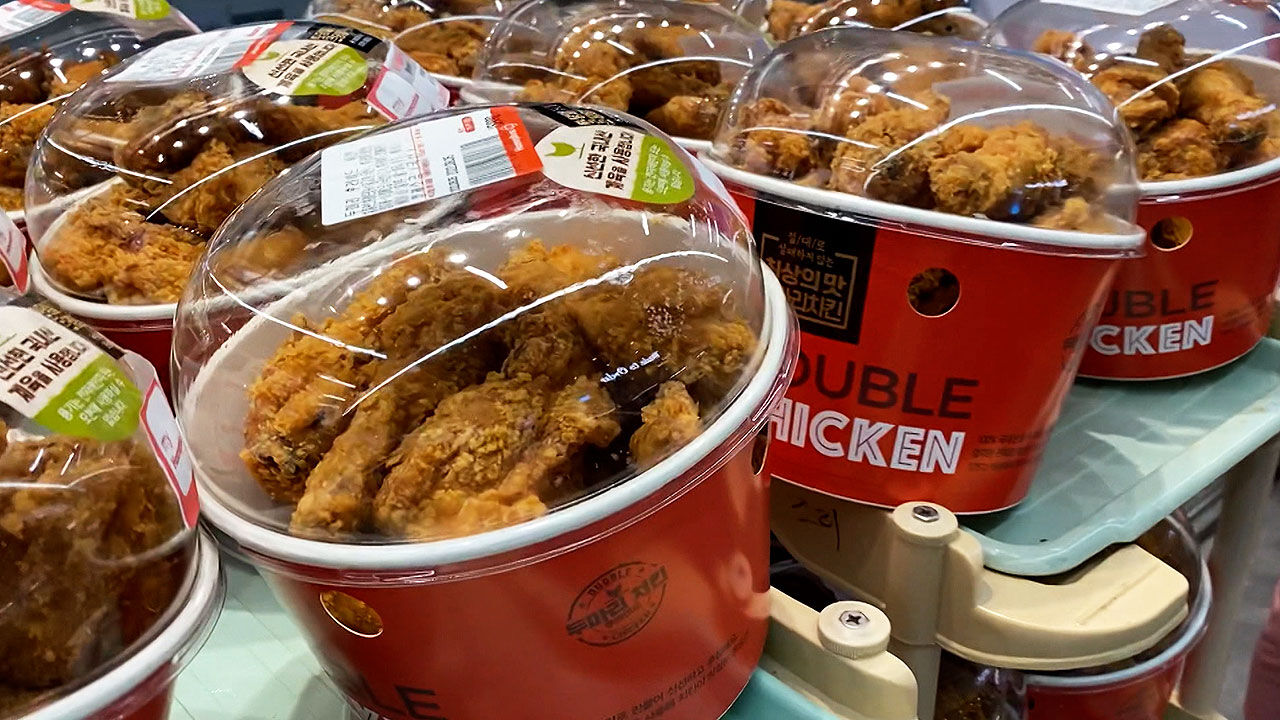 I heard that a large mart recently released a chicken that costs less than 7,000 won, and they say that they sell a lot, now.

In the age of 20,000 won for chicken, chickens that cost less than 7,000 won are produced, so of course, their popularity is bound to explode.

In some stores, as shown in the photo, there was also an open run phenomenon where people lined up to match the time the chicken was served.

In the mart app, the number of searches in the last week has increased by more than 1,000% compared to a month ago.

Also, on the 15th, which is Malbok, there is an event that will sell 1,000 won cheaper than 5,000 animals, attracting more attention.

Other marts are also offering chicken for less than 10,000 won as an event product. Even when cost-effective chicken was launched at the mart 12 years ago, there was a lot of backlash from the franchise industry and small business owners.

Even after protesting, the sale was stopped, but now, 12 years later, consumers are even boycotting the high price of chicken.

It is an atmosphere where cost-effective chicken is gaining national support.

But again, this has been controversial recently, and it is still possible to sell it so cheaply at the mart.

Having said this, the self-employed make no sense.

They say they're at odds with each other right now, opinions.

Yes, the price of chicken is almost three times the difference.

The large mart that sells the chicken explained why 6,990 won per chicken is possible.

['Affordable Chicken' Hypermarket Employee (Screen Source: YouTube Moji): I don't understand the saying that there are no leftovers (even if you sell chicken).

We buy materials in bulk.

We don't do business at a loss, either.] Even if

we sell it at such a low price, we have leftovers.

Quite the opposite of what the head of the chicken industry said a few months ago.

There were also objections to the chicken margin of large supermarkets, mainly in the self-employed community. The price of salt paper increased by 100 won per kilo to 1,500 won, and he argued that it was absurd when considering various costs such as labor costs.

There were also reactions such as "Even if there is 1 won left, it will remain", "It is said that there is no left over".

Also, there were many opinions that it might be a bait product,

It's saying that marketing chicken margins have been abandoned because of other expenses.

Some have argued that the chicken franchise headquarters are taking profits.

So, so far, it seems to be the story of the self-employed, right?

What position did you take there?

Now, the price of chicken keeps going up, so public opinion is so bad.

It is the position that we will refrain from responding at the headquarters level for the time being.

However, he said that he would not consider a price cut just because the response to cheap hypermarket chicken was good, because it was judged that there was no competition in the first place.

The explanation is that there is a difference not only in the infrastructure of large supermarkets and general chicken houses, but also in the quality of the chicken. Basically, the size of the chicken is different.

Supermarkets use No. 8-9, and franchise chicken uses No. 10, which is larger than this.

The industry said it plans to highlight the differentiators of the franchise chicken after some time has passed.

I'm not an expert, but I don't think the price will make a threefold difference just because the chicken size is slightly different and the distribution process is a little different.

From the 15th, an event called the Livestock Product Discount Daejeon will start for Chuseok.

Yes, from next Monday to the 12th of next month, you can buy livestock and fishery products 20-30% cheaper at large marts, online malls, and traditional markets.

20 holy items are eligible. In large marts and online malls, a maximum of 20,000 won per person, and at local agricultural products direct stores, a 20% discount is supported up to a limit of 30,000 won.

You can buy agricultural, livestock and fishery products at up to 50% cheaper by adding their own discounts.

In the traditional market, the discount is even higher.