The aviation sector is an essential source of Dubai's economy... and a major supporter of trade and tourism

Officials in the aviation sector said that during the past decades, the sector continued to support the growth of Dubai's economy with the high rates of passenger flow and linking the emirate with the outside world, noting that Dubai International Airport is a major tributary to the emirate's economy, and a major enabling factor in the growth of the state's trade volume. 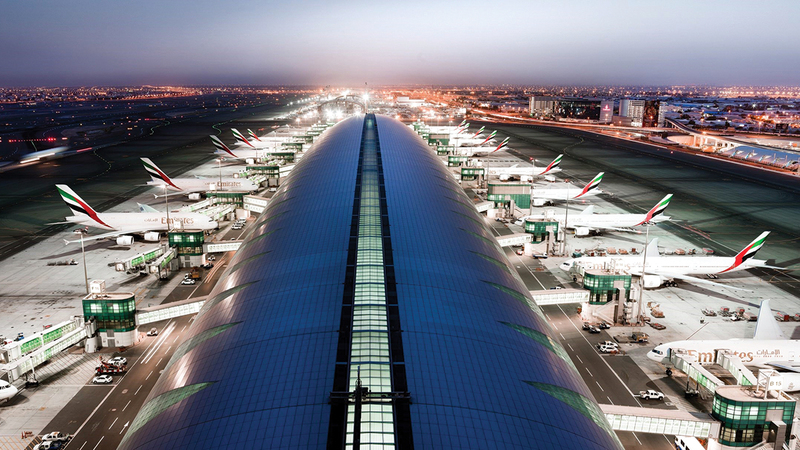 Officials: The open skies policy has turned the emirate into one of the most connected cities to the outside world

The aviation sector is an essential source of Dubai's economy... and a major supporter of trade and tourism

Officials in the aviation sector said that the sector continued, during the past decades, to support the growth of Dubai's economy with the high rates of passenger flow and linking the emirate to the outside world, noting that Dubai International Airport is a major tributary to the emirate's economy, and a major enabling factor in the growth of the state's trade volume in general, and the Emirate of Dubai In particular, with various global markets.

They told "Emirates Today" that the aviation sector enjoyed, in the late nineties of the last century, a large share of government support, in light of comprehensive expansion projects, with the aim of preparing the airport and preparing for the new millennium, and the race for the number one in the world.

In detail, the Director-General of the Dubai Civil Aviation Authority and the Managing Director of the Dubai Air Navigation Services Corporation, Mohammed Abdullah Ahli, said that the opening of Dubai's international airport in 1960 contributed, during a later period, to transforming the city into one of the world's most connected to the outside world, pointing out He indicated that economic growth contributed to the flow of investments, which was reflected in a significant increase in passenger traffic through the airport.

Ahli added that, in order to increase its capacity, the construction of the new runway built of asphalt was later completed in 1965, instead of the "compact sand runway", to make the airport ready to receive the largest aircraft.

He pointed out that the construction of a new building for Dubai Airport was started in 1969, consisting of three floors and an observation tower, as well as aircraft parking and administration offices.

Ahli stressed that Dubai has always sought during the past decades to turn challenges into growth opportunities in light of the goals it set to enhance its position on the air transport map, pointing out that the growth of Dubai's population in light of large development projects led to a high demand for goods, which increased the volume of freight. The airport witnessed the completion of new expansions, including the construction of a passenger terminal, and the construction of new facilities to receive cargo planes.

He stated that Dubai International Airport is an essential tributary to the emirate's economy, and a major enabling factor in the growth of the country's trade volume in general, and the Emirate of Dubai in particular, with various major markets.

Ahli pointed out that the policy of open skies without restrictions played a prominent role in enhancing Dubai's position as a hub for air transport between West and East, as Dubai continued to implement a series of projects related to expansion operations and enhancing the position of the airport, which later turned into the largest air transport outlet in the world, pointing to The aviation sector is one of the most important sectors that contributed significantly to the growth of the emirate's economy.

For his part, CEO of flydubai, Ghaith Al Ghaith, said that Dubai's infrastructure and legislative system will remain competitive and adapt to changing challenges, whether economic or operational challenges, evidenced by the continued growth in the number of passengers through Dubai airports, in addition to the expansion and growth that It is witnessed by "Fly Dubai" in the number of passengers and destinations.

Al-Ghaith added that the establishment of "fly Dubai" came from an insightful vision of the leadership that the aviation market in the region needs a new concept of travel, in accordance with a strategy aimed at removing barriers to travel and facilitating the flow of trade and tourism.

He pointed out that flydubai, since its launch 13 years ago, has opened more than 90 new destinations, most of which were suffering from the absence or lack of direct flights from Dubai and the Emirates, stressing that flydubai was able to create a great demand for travel and tourism to and from those markets. .

Al Ghaith stated that aviation has witnessed significant growth rates over the past decades, noting that Dubai International Airport has topped the list of the busiest airports in the number of international passengers.

He stressed that the aviation sector played a prominent role in Dubai's economy, directly and indirectly, as it supports and supports many other economic sectors.

In turn, Vice President of Dubai Airports, Jamal Al Hai, said that the new facilities and expansion operations of the airport in light of the open skies policy, played a prominent role and contributed to consolidating the gains at the regional and international levels.

Al Hai added: "For the first time in its history, in 1997, (Dubai International) entered the club of major airports, as it ranked sixth in a list of the world's 10 fastest growing airports, at a rate of nearly 14%, surpassing major international airports in Europe and Asia."

And he indicated that "during the period between 1980 and 2010, the air transport sector in Dubai witnessed a number of developments that boosted the growth process to unprecedented levels. On October 25, 1985, (Emirates Airlines) launched its first airline with only two planes, and they are two chartered planes. (Boeing 737) and (Airbus B4 300) to the Pakistani capital, Karachi.”

Al Hai stated that the aviation sector, in the late nineties of the 20th century, received a large share of government support, as the Department of Civil Aviation in Dubai announced an expansion project that cost 30 billion dirhams, with the aim of preparing the airport and preparing for the new millennium, and the race for the first number in the world The airport ranked first in the Middle East in terms of the number of international passengers in 1997, and ranked sixth globally in terms of growth rates, according to the Airports Council International.

Al Hai pointed out that Dubai Airport and the aviation sector continued to support the growth of Dubai's economy during the past decades, with the high rates of passenger flow and linking the emirate to the outside world.

In addition, the Executive Vice President of the Dubai Air Navigation Services Corporation "Dans", Ibrahim Ahli, said, "Dubai has played a pivotal role in supporting the global aviation industry through its government's insightful vision and creative initiatives that enabled it to lead the recovery phase of the global aviation sector from the effects of the Corona pandemic." ».

He added: "We at Danz play a major role in enhancing Dubai's economy and its global reputation and ensuring the provision of the best services to airlines and the rest of our customers, by focusing our priority on the efficiency of our human and technical resources and continuous cooperation and coordination with our partners in the aviation sector."

Dubai Airport is one of the busiest airports in terms of international passenger numbers.

The aviation industry is expected to contribute around 45% of Dubai's GDP by 2030.

Emirates Airlines has established a high global reputation thanks to the uniqueness of its services, which culminated in winning many prestigious international awards.

The airline flies to more than 130 cities across six continents, through its highly-efficient global hub in Dubai.

From its headquarters in Dubai, flydubai has built a network of more than 95 destinations served by a fleet of more than 63 aircraft.

Since starting operations in June 2009, the airline has been committed to removing barriers to travel, facilitating the flow of trade and tourism and promoting cross-cultural communication across its growing network.

Air freight is one of the main activities in the air transport sector, given Dubai's position as a global trade center and an international bridge for the passage of goods between different countries of the world.

The airport provides flights to 193 global destinations in 92 countries, through more than 73 international airlines.

According to data published by OAG, Dubai Airport tops the list of the largest air transport hubs in the world, in terms of the number of scheduled seats on international flights.

Aviation is an essential pillar of the economy

The air transport sector, according to the economic report of the Emirate of Dubai issued in 2019, is one of the main pillars on which the emirate’s economy depends, as it represents a basic locomotive for economic growth in the emirate due to its links with other economic sectors and the tremendous achievements it has achieved, during recent years. International and regional institutions, based on advanced and high-quality infrastructure.

According to the report, many indicators and specialized surveys highlight the distinguished international position enjoyed by the air transport system in the Emirate of Dubai, such as Dubai International Airport maintaining its lead in the list of the largest airports in the world in terms of the number of international passengers, for the eighth year in a row, and the arrival of annual traffic for 2019 to about 86.4 million passengers.

A 2014 report issued by Oxford Economics, a global research institute, showed that the explosive growth in the aviation sector played a pivotal role in Dubai's economic growth.

The report indicated that the contribution of Emirates Airlines, Dubai Airports, and the sector as a whole to the Dubai economy amounted to $26.7 billion in 2013, equivalent to 27% of the gross domestic product. The sector also provided 416,500 jobs, constituting 21% of the total. jobs in the emirate.

According to the report, the aviation industry is expected to contribute about 45% of Dubai's GDP by 2030, noting that for every $100 of activities in the sector, $72 is added in other sectors of the local economy.

The report indicated that for every 100 new jobs in the aviation sector, 116 jobs are created in other sectors in Dubai.

The Emirate of Dubai has achieved widespread global fame, making it a global destination for the economy, attracting capital and entrepreneurs from different countries, and becoming a starting point for many billion companies thanks to its advanced infrastructure and flexible legislative environment.

Several sectors have contributed to the growth of the emirate's economy and achieved leaps and bounds in all fields over the past years. Perhaps the most prominent of these sectors are aviation, tourism, retail, technology, real estate and financial services.

The aviation sector continued to support the growth of Dubai's economy with high rates of passenger flow and linking the emirate to the outside world.

Dubai International Airport is an essential tributary to the emirate's economy, and a major enabling factor in the growth of the country's trade volume in general, and the Emirate of Dubai in particular, with various global markets.

The tourism sector has contributed to the diversification of the emirate's economy, as Dubai has huge tourism potentials and a developed infrastructure that has made it a favorite destination to visit throughout the year.

The retail trade sector is one of the activities that support the growth and diversification of Dubai's economy, as it has contributed to keeping pace with the economic development in the emirate.

The real estate sector has also recorded remarkable growth levels during the last period, as Dubai has become a magnet for investors from all over the world.

Dubai real estate witnessed a significant improvement in its investment attractiveness with the high return on investment from leasing it thanks to the stimulating measures.