The price of gold fell and you wanted to buy gold, but the bank asked you to be careful. What happened?

China News Service, July 19th Question : The price of gold fell and I wanted to buy gold, but the bank asked you to be careful. What happened?   Zhongxin Finance reporter Zuo Yukun   Gold prices are down!   The international gold price, which has been rising since late January this year, finally reached a turning point of rising in June, and it has been fluctuating all the way down. The falli 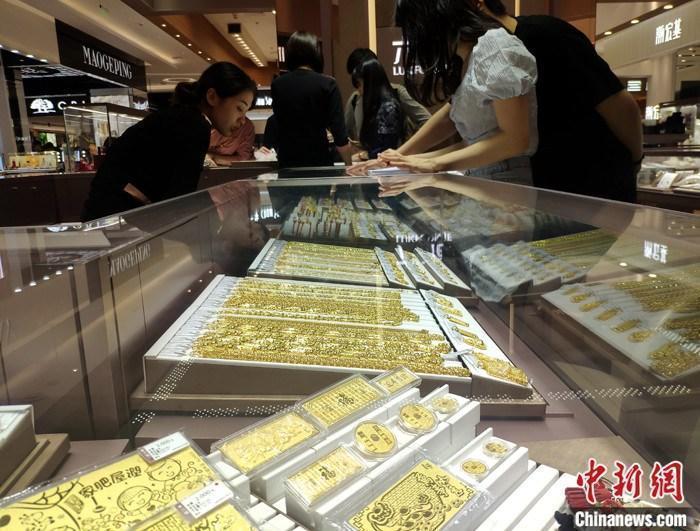 Question : The price of gold fell and I wanted to buy gold, but the bank asked you to be careful. What happened?

Gold prices are down!

The international gold price, which has been rising since late January this year, finally reached a turning point of rising in June, and it has been fluctuating all the way down.

The falling gold price has attracted many gold buyers, so is now a good time to buy gold?

In the past month, the Federal Reserve's hawkish interest rate hike stance to combat high inflation has pushed the dollar index to a 20-year high, making gold under pressure.

The news also quickly spread to the domestic gold market.

"Last year, the price was about 370-380 yuan/gram. Before July this year, it was mostly about 400 yuan/gram. Now it has basically dropped to about 375 yuan/gram." said Mr. Yu, who is engaged in the gold jewelry business.

"In general, the gold price of jewelry series is still more than 400 yuan. Customers often ask why there is still so much difference from the international gold price." The above salesperson mentioned that, after all, the store has processing, store rent, labor and other expenses. Moreover, the jewelry was purchased at a high price before, and it is impossible to sell it at a loss.

"Now that the Internet is developed, information is updated quickly, and the real-time fluctuations of gold prices can be seen by consumers. However, even if offline physical stores know that the price has been reduced, it is impossible to adjust immediately. The lag is at least ten days, and the price of gold is stable. "Mr. Yu also mentioned that the fluctuation of gold price may be more obvious in the recycling market.

"For example, in June, a customer asked me about gold recycling. The price at that time was about 390 yuan/gram. The customer wanted to wait until they saw 400 yuan/gram before selling, but now it has dropped by almost 30 yuan per gram. One month More than 200 grams of gold will be sold for almost 6,000 yuan less." Mr. Yu said.

A gold jewelry store in Beijing.

The price of gold has weakened, and many consumers are eagerly waiting for the shot.

However, from the banking side, there has been news that the precious metal business is being tightened and even gradually withdrawn.

On July 15, Industrial and Commercial Bank of China issued a notice saying that from 8:00 on August 15, the account gold and account silver business opening transactions will be suspended. Position trades are not affected.

This is the second time that ICBC has tightened its precious metal business since July.

Consumer Xiao Liu has been buying ICBC's "Ruyi Gold" accumulated products for a long time. She told reporters that she consulted the account manager as soon as she heard the news, and the answer was that the suspension was for account gold and silver business opening transactions. Accumulation business is not affected.

"But I did hear a friend who bought gold together said that in some places, precious metal-related businesses cannot open new accounts, or the steps are more troublesome." Xiao Liu said.

But in fact, the tightening of such business by banks is not just because of the fluctuation of gold in this round. The tightening action can be traced back to March 2020 at the earliest. Banks began to gradually tighten or even liquidate products with leveraged attributes.

According to incomplete statistics, since 2020, more than 20 banks have suspended applications for new account opening of precious metal-related businesses.

Is it a good time to start?

Regarding the next trend of gold prices, Zhou Maohua, a macro researcher of the Financial Market Department of China Everbright Bank, believes that the precious metal market is currently facing a complex environment, with increased volatility, reduced market predictability, and increased potential risks, especially for some trading varieties with leverage.

On the 13th local time, the June CPI data just released by the United States showed a year-on-year increase of 9.1%, and the increase reached a new high.

Under the expectation that inflation will continue and the Fed will raise interest rates at full speed, the market is not optimistic about the trend of gold.

"We are still more optimistic about the continued decline. The global scope of gold's safe-haven attribute is indeed declining, and even some more anxious peers have begun to look forward to falling to 350 yuan / gram." Mr. Yu also believes.

Regarding the investment needs of consumers, Mr. Yu mentioned that in general, the third quarter of each year is the off-season for gold consumption, and the price can be relatively low.

Coupled with the recent trend of gold prices, if you have the plan to buy gold jewelry, or friends who have gold needs such as marriage, you can buy your favorite style.

"But if you want to buy simply because the price of gold has fallen, you should be cautious. You must buy gold bars or gold sheets." Mr. Yu mentioned.

"For high-risk investments such as foreign exchange products, commodity futures, and financial derivatives, if individual investors participate in investment, they should pay attention to changes in the international financial market in a timely manner, and appropriately adjust their investment positions according to their own risk tolerance, so as to prevent investment risks more effectively." Dong Ximiao, chief researcher of finance, reminded that at the same time, it should be fully realized that the prices of precious metals including gold are not only rising and falling, and they are not static hedging tools.