Three times in two days! The official shot to stabilize the price, and the price of live pigs adjusted back

China News Service, Beijing, July 7th: Three times in two days! The official shot to stabilize the price, and the price of live pigs adjusted back   Xie Yiguan, a reporter from China-Singapore Finance and Economics   "People take food as the sky". In recent years, the "ups and downs" of pork prices have affected the hearts of ordinary people and have also attracted the attention of government 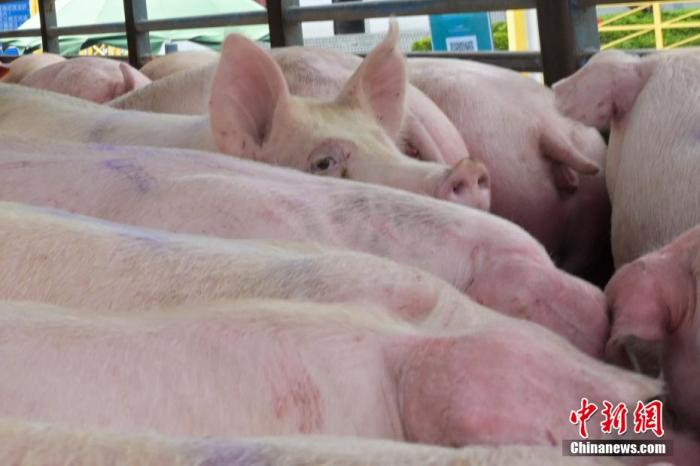 The official shot to stabilize the price, and the price of live pigs adjusted back

"People take food as the sky". In recent years, the "ups and downs" of pork prices have affected the hearts of ordinary people and have also attracted the attention of government departments.

On the 4th, the National Development and Reform Commission issued a document saying that in response to the recent rapid rise in the price of live pigs, the Price Department of the National Development and Reform Commission organized a meeting of industry associations, some breeding enterprises and slaughtering enterprises to conduct in-depth analysis of the supply and demand and price situation of the live pig market, and to determine the price trend in the later period. Research and do a good job in ensuring supply and price stability in the live pig market.

On the 5th, the National Development and Reform Commission once again sent two messages in succession, focusing on the live pig market.

First, the Price Department of the National Development and Reform Commission is studying the launch of the central pork reserve, and guiding local governments to release the reserve in a timely manner to form a joint force of regulation and prevent the price of live pigs from rising too fast.

Second, the Price Department of the National Development and Reform Commission recently held a symposium with the Dalian Commodity Exchange, and agreed to strengthen the joint supervision of the live pig spot futures market, timely check for abnormal transactions, strengthen penetrating supervision, and severely crack down on fabrication and dissemination of price increase information, hoarding, price gouging, etc. Violations of laws and regulations such as malicious speculation by capital.

Behind the official intensive "shot" is the recent fluctuation in the price of live pigs.

According to data from the Ministry of Agriculture and Rural Affairs, as of 14:00 on July 6, the average price of pork in the national agricultural wholesale market was 28.51 yuan per kilogram, compared with 21.36 yuan on June 21, an increase of 7.15 yuan per kilogram.

In terms of retail, taking Beijing as an example, on July 6, a reporter from Zhongxin Finance visited a supermarket in Xicheng District, Beijing and found that the price of pork front and rear buttocks was 19.8 yuan per catty, and pork belly was 23.8 yuan per catty.

Zhongxin Finance combed the data of the Ministry of Agriculture and Rural Affairs and found that this wave of increase in live pig prices began at the end of March.

Compared with the starting point of this wave of live pig price increases (the 12th week), the average purchase price of live pigs has risen for 14 consecutive weeks, with a cumulative increase of 29.8%, and the average ex-factory price of white strips has increased by 25.6%.

The price of pork in a supermarket in Xicheng District, Beijing.

Why did the price of live pigs rise so fast?

In March, the price of pork once fell below 10 yuan per catty, and it was in a "trough". Why did it rise rapidly?

According to the introduction of the National Development and Reform Commission, relevant analysis believes that the recent rapid rise in domestic live pig prices is mainly due to

irrational reluctance to sell and secondary fattening in the market

. The price atmosphere intensified the market's reluctance to sell in the short term.

Liu Tong, head of the statistics department of Beijing Xinfadi, also pointed out when talking about the recent rise in pig prices that as far as farms are concerned, after a long period of losses, there is finally an opportunity to turn losses into profits, and farms are reluctant to sell. Mentality, there are also actions to suppress the volume and insure the price, and some farms are doing secondary fattening, which makes the supply of wool pigs in a tight state, which promotes the rise of pig prices.

"At the same time, the steady rise in pig prices has further strengthened the confidence in slaughtering. Since slaughtering can increase profit margins, the amount of slaughtering will further increase." Liu Tong said.

In addition to these "human factors", Guosheng Securities pointed out in a research report that since June, pig prices have continued to maintain an upward trend. On the one hand, the supply-side slaughter volume is in a monthly downward trend; on the other hand, the impact of the new crown pneumonia epidemic control on the demand side has gradually weakened. Consumer demand for catering group meals has picked up.

Data map: Two black pigs in Jinhua in a smart breeding base in Wucheng, Jinhua.

At present, the production capacity of live pigs is generally reasonable and sufficient. In addition to the lack of consumption, the price of live pigs does not have the basis for a sustained and substantial increase

. Blind slaughtering and secondary fattening may lead to concentrated slaughtering in the later period and rapid price decline again, resulting in large fluctuations in market prices, which is not conducive to the The normal production and operation of the enterprise and the long-term healthy development of the industry." Analysis of relevant parties.

Faced with the actions of pig companies pressing the fence and reluctant to sell, the price department of the National Development and Reform Commission recently stated that large-scale breeding enterprises should take the lead in maintaining a normal slaughter rhythm, take advantage of the trend to release fattening pigs of suitable weight, and not blindly press the fence, reminding enterprises not to hoard, drive up prices, and not collude to raise prices. price.

At the same time, effective measures such as reserve adjustment and supply and demand adjustment will be taken in a timely manner to prevent the price of live pigs from rising too fast, and they will work with relevant departments to strengthen market supervision, and severely punish violations of laws and regulations such as fabricating and spreading information on price increases and driving up prices.

Following a series of actions by relevant departments, Feng Yonghui, chief analyst of China Live Pig Warning Network, told Zhongxin Finance reporter, "The price of the entire live pig market has corrected in the past two days, and this underpricing effect is expected to continue for some time."

Judging from the quotations of slaughtering companies in various places, among the 28 provinces that can be monitored across the country, 18 provinces have seen a decrease in pig prices to varying degrees.

Under the bullish expectation of pork, on July 4, the pork concept sector soared, and more than ten pork stocks including Muyuan shares rose by the daily limit.

On the same day, the main contract of hog futures on the Dalian Commodity Exchange rose by the daily limit.

After the official move to stabilize the price, the pork concept sector fell for two consecutive days. On the 6th, Tangrenshen fell by more than 4%, and Muyuan, Xinwufeng, and Tianbang Food fell by more than 3%.

Previously, Meng Wei, a spokesman for the National Development and Reform Commission, said that from the perspective of the futures market, the prices of live pig contracts expiring in September, November and January next year have gradually risen, reflecting the market's expectations for a later price recovery.

However, Meng Wei also said that the current production capacity of live pigs is reasonably sufficient. At the end of April, the national stock of breeding sows was 41.77 million, which is in the green range of production capacity. It is unlikely that the price of live pigs will rise sharply during the African swine fever period in previous years. The price of pig grains will run within a generally reasonable range.