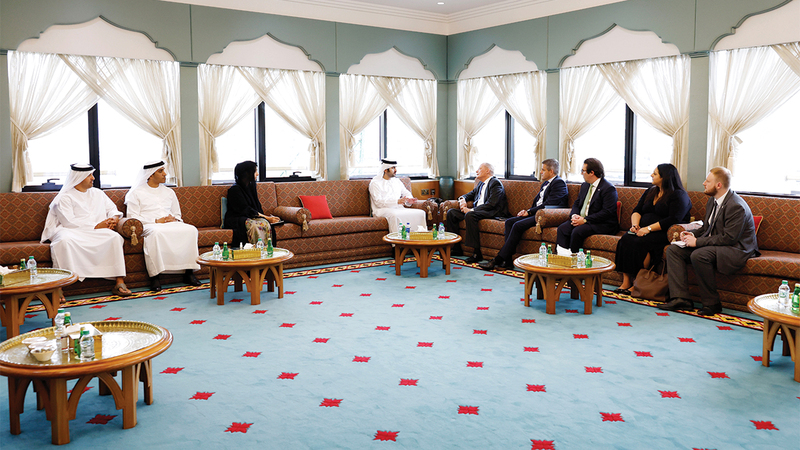 The UAE is the UK's third trading partner outside Europe

During the meeting, they reviewed the steady development of Emirati-British relations in various fields, under the leadership of His Highness Sheikh Mohamed bin Zayed Al Nahyan, President of the UAE, and British Prime Minister Boris Johnson, within the framework of the two sides' keenness to develop partnership and cooperation ties by discovering more opportunities that contribute to Strengthening the bonds of those ties and pushing them forward to serve the interests of the two countries and benefit the two friendly peoples.

His Highness Sheikh Maktoum bin Mohammed bin Rashid Al Maktoum expressed the UAE's pride in its growing partnership with the United Kingdom, which continues to flourish in the midst of the surrounding global changes, which confirms the strength of that partnership, and the strong historical ties based on it between the two countries.

His Highness noted the UAE's keenness to work closely with the United Kingdom to consolidate the elements of progress and prosperity for their peoples, and to cooperate in order to contribute positively to finding effective solutions to current global challenges, while continuing to expand the exchange of experiences, ideas and visions between the two sides on issues of common interest.

Partnership for the future

The two sides stressed that His Highness the President's visit to London last September gave a great boost to bilateral relations, as His Highness and the British Prime Minister witnessed the signing of a number of agreements and memoranda of understanding, covering a number of vital sectors, while it was agreed during the visit on the importance of activating the "partnership from For the Future” by adopting two main pillars, namely providing opportunities for sustainable prosperity, and addressing global issues, while starting from this partnership to establish new mechanisms to enhance ways of cooperation in the fields of trade, investment and innovation, as well as deepening cooperation in many basic areas related to the future industry.

The meeting dealt with the continuous progress in bilateral cooperation, especially in the field of investment and trade, as the UAE is the third trading partner of the United Kingdom outside Europe, its largest trading partner in the Middle East, and one of the fastest growing markets for British exports. Tourism exchange is one of the most important paths of economic cooperation between the two countries, as the UAE receives about 1.5 million tourists from the United Kingdom annually.

The meeting was attended by Reem bint Ibrahim Al Hashimi, Minister of State for International Cooperation, Secretary General of the Executive Council of Dubai, Abdullah Al Basti, and Director General of the Department of Economy and Tourism in Dubai, Hilal Saeed Al Marri.