[Friendly economy] It is illegal to sell 'this' at the carrot market... What are the prohibited items for second-hand trade? 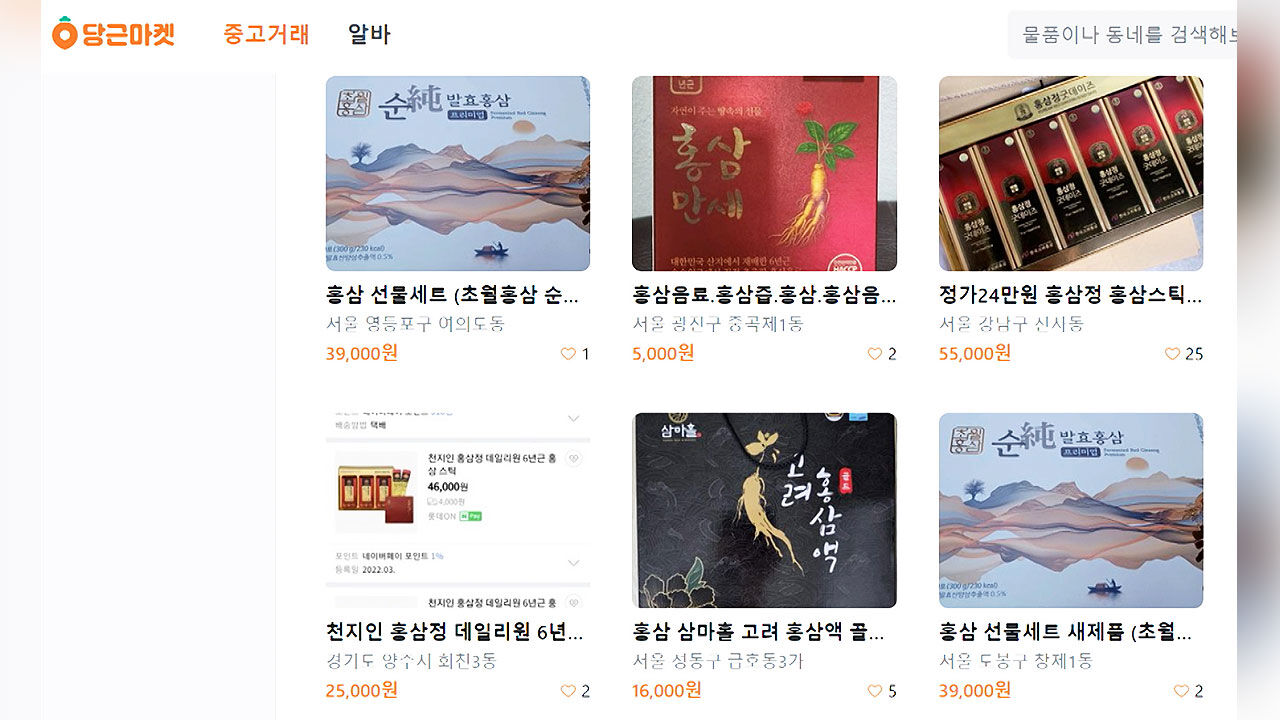 There are products that shouldn't be sold on second-hand trading sites, but they are being traded.

Yes, health functional foods such as red ginseng and lactic acid bacteria or cosmetic samples are not allowed to be bought and sold between individuals on used trading sites, but they are selling well.

I went to a used trading site and typed 'red ginseng', and there were so many sales posts.

You can also set to receive red ginseng notifications.

There were a lot of posts saying they would sell cosmetic samples or share them for free, but all of these are illegal.

Although items that cannot be sold on second-hand trading sites are by law, more than 5,400 related posts have been caught in the past year.

Of these, 5,000 were health functional foods that had to be sold after reporting the business.

To tell you about some other prohibited items, the cosmetic samples I mentioned earlier are not for sale.

Drugs that can only be sold at pharmacies, tobacco, alcohol, volume-rate bags, medical devices, and processed agricultural products are also prohibited.

However, it seems that there are a lot of people who do not know these things.

The Consumer Agency surveyed more than 1,000 consumers in April, and about half said they were unaware that there were banned items.

Even second-hand trading platform companies should actively inform them of this, but they were unable to do so.

All four companies were providing notices on non-tradable items in their notices, but we do not read all of these notices and write sales articles.

Some vendors did not disclose this when the seller posted.

Also, the device to filter these sales posts was insufficient, and even if the search word blocking function was operated, searching with abbreviations or slang for e-cigarettes was open.

However, selling non-tradable items can result in penalties.

For example, selling a pay-as-you-go envelope can result in up to five years in prison or a fine of up to 50 million won.

Of course, we will not actively crack down on individual sellers, but we recommend that you be careful as it is absolutely illegal.

I think you should think carefully about the things that shouldn't be sold on used trading sites and take care of them.

And there are quite a few people who sell expensive items like this on second-hand sites, these days.

But if you sell this repeatedly, you can now pay tax.

Yes, it is common to sell luxury goods in second-hand trading apps, but if one person sells hundreds of new products worth millions of won without opening the packaging, then you should be considered as a business operator.

In the future, the government has decided to impose a tax on these businesses.

Now, since it is the principle that no tax is levied on secondhand transactions between individuals, these businesses are also not required to pay taxes.

Because of this, there are many cases of evading taxes after selling goods under the guise of second-hand transactions.

So, an amendment to the relevant law to correct this 'tricky tax evasion' will be announced this month. Under the current law, all businesses selling products for business purposes must report and pay 10% value-added tax, and if they have business income, report a 6~45% global income tax. You should.

Now, what I am curious about is how and by what criteria are you going to differentiate between a business owner and a general individual trader?

Yes, it seems that it will be judged by whether or not it is a repetitive transaction. Currently, the most common used transaction is using a platform.

Therefore, it can be said that the core of this amendment is to provide a legal basis for requesting data such as user transaction details from related companies.

Based on these data, it is possible to determine whether or not a fake user is a fraudulent user and tax it.

However, it is not easy to come up with a law that encompasses second-hand transactions, as they are conducted not only through apps but also through quite a variety of routes such as internet cafes.