This mother and baby app will be shut down! The platform claims to have served over 50 million young mothers

China News Service, July 5 (Shao Wanyun) A few days ago, the official website of Miya, a maternal and child e-commerce platform, issued an announcement that the Miya APP will officially stop service and shut down on September 10. The picture is from the official website of Miya Why shut down?   The Miya announcement mentioned that the reason for shutting down the app was the change in user sh 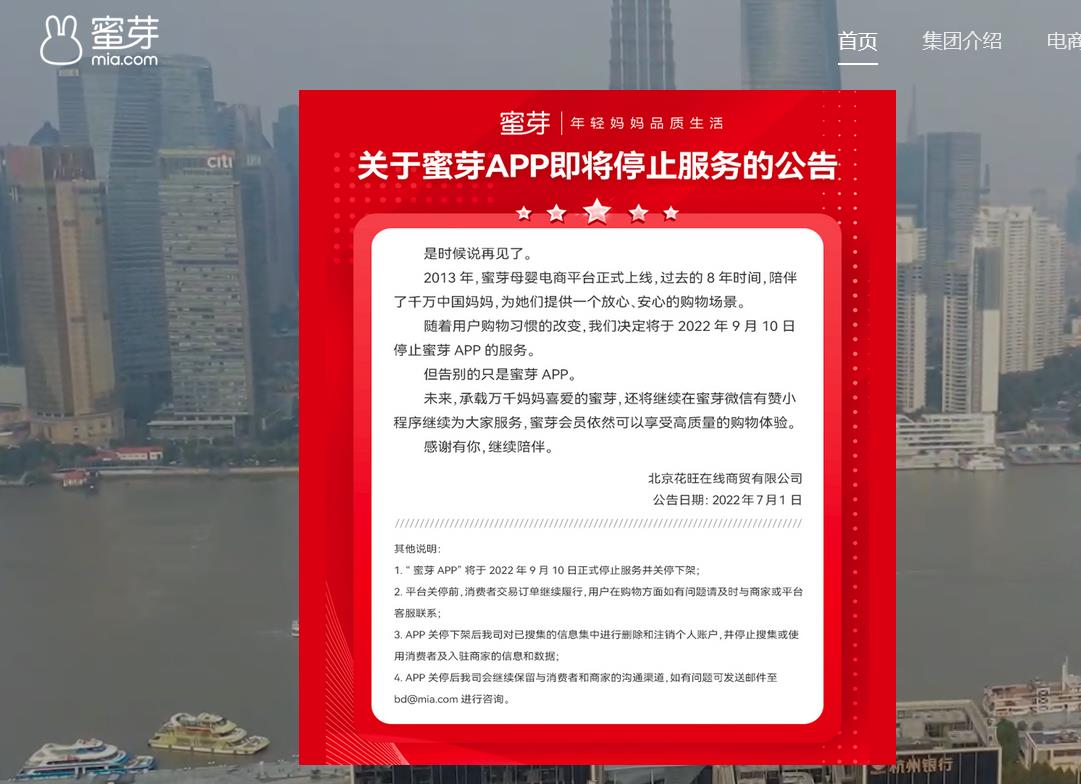 China News Service, July 5 (Shao Wanyun) A few days ago, the official website of Miya, a maternal and child e-commerce platform, issued an announcement that the Miya APP will officially stop service and shut down on September 10.

The picture is from the official website of Miya

The Miya announcement mentioned that the reason for shutting down the app was the change in user shopping habits.

Miya emphasized that the only farewell is the Miya APP, and Miya will continue

to serve users on the Miya WeChat Youzan applet

, and Miya members can still enjoy the shopping experience.

The announcement stated that before the platform was shut down, consumer transaction orders continued to be fulfilled, and if users had any questions about shopping, they could contact the merchant or the platform’s customer service.

How to protect the rights and interests of consumers and businesses?

Regarding the settled merchants, Miya said that in order to ensure that the interests of all parties are protected, the transaction orders between consumers and merchants will continue to be fulfilled until the platform is shut down.

Before the merchant completes the withdrawal, it is necessary to verify and confirm that all orders have been completed, all commodity logistics users have signed for receipt, all consumers’ after-sales problems have been properly handled, and all products in the store have been removed from the shelves.

Merchants can apply for the withdrawal process online from July 1st, and Miya will properly handle the merchants' settlement and withdrawal-related matters.

The picture is from the official website of Miya

Miya made it clear that after the APP is closed, the company will delete the collected information and cancel the personal account, and stop collecting or using the information and data of consumers and settled merchants.

to have served over 50 million young mothers

According to the official website of Miya, Miya is an enterprise founded by women, managed by women and serving women.

The founder and CEO, Ms. Liu Nan, graduated from Peking University with a master’s degree in journalism. She went through a transition from being a white-collar worker in a Fortune 500 company to a full-time mother, and founded Miya in 2011.

The core team of Miya is mostly from the world's top 500 companies and top Internet companies in China.

The proportion of women in the management of the group has reached 70%, creating an excellent professional team with both women's perceptual insight and men's rational thinking.

According to the introduction of its official website, Miya has served more than 50 million young Chinese mothers.

The background information of Miya Investment shows that it has obtained a total of more than 2 billion yuan in financing so far, and investment institutions include ZhenFeng, Xianfeng Huaxing, Sequoia Capital, H-Capital, etc.

Baidu's $150 million financing set a new record for the amount of financing in the maternal and child industry at that time.

According to Tianyancha, Beijing Huawang Online Trading Co., Ltd., the main company of Miya, completed three rounds of financing in 2014, with each round of financing ranging from several million to $60 million.

In September 2015, the D round of financing was completed, with a financing amount of 150 million US dollars.

In October 2016, Miya completed the latest round of financing, but the financing amount has not been disclosed.

Was fined for violating price laws

According to the Credit China website, on January 3, 2022, Beijing Huawang Online Trading Co., Ltd. was fined 50,000 yuan by the Beijing Municipal Administration for Market Regulation.

The illegal fact is that on November 9, 2021, the law enforcement officers of the Beijing Municipal Administration for Market Regulation discovered during the special inspection of online promotions before the "Double Eleven" that Beijing Huawang Online Trading Co., Ltd. On the web page of the mobile terminal, commodities such as daily necessities, cosmetics, food, clothing, etc. are sold, and content such as commodity pictures, names, introductions, sales prices, and "line prices" are displayed.

In the subsequent investigation, Beijing Huawang Online Trading Co., Ltd. was unable to provide valid evidence materials for the "line price" of the displayed products.