China News Service, July 5th: Who is the real "Snow Lotus"? Conscience ice cream encounters "identity mystery"   Xie Yiguan, a reporter from China-Singapore Finance and Economics   Summer is the home of ice cream, but this year's "inflated" price of ice cream has made people "pocketed" accidentally.   When the freezer of the convenience store was full of "ice cream assassins", netizens starte 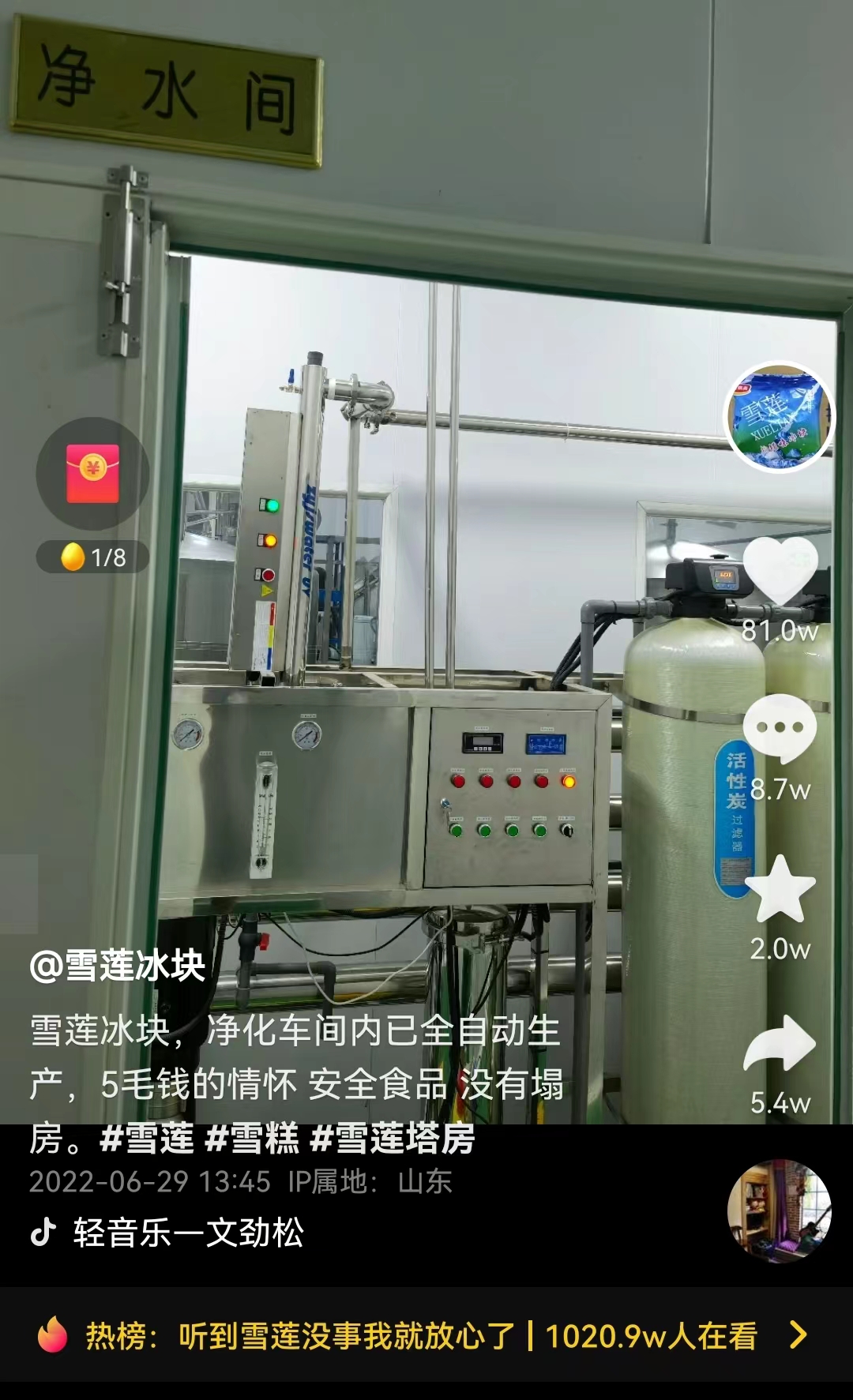 Who is the real "Snow Lotus"?

Summer is the home of ice cream, but this year's "inflated" price of ice cream has made people "pocketed" accidentally.

When the freezer of the convenience store was full of "ice cream assassins", netizens started the ice cream defense operation, and the protagonist of the defense was the "Snow Lotus" of 50 cents.

But are you sure you are really defending the "Snow Lotus" in your memory?

The snow lotus of 5 cents is on fire

The incident stemmed from a recent netizen who broke the news that the production workshop of an ice cream was in a mess, and ice cubes were scattered on the ground.

Because of its appearance and packaging similar to the cheap domestic brand "Xuelian", it was rumored that "Xuelian ice cube collapsed."

On June 29, Yixiaomeng Linyi E-Commerce Co., Ltd. responded by registering "Snow Lotus Ice Cube" on Douyin, saying that "it has been fully automated in the purification workshop, the feelings of 5 cents, safe food, and no house collapse." Post workshop photos for clarification.

Mr. Li, the person in charge of the snow lotus brand, also said in an interview with the media, "The profit of a pack of snow lotus is about 5 cents, which should be the lowest price ice cream on the market, and the profit it brings is not enough to develop other products. We still focus on ice cream that ordinary people can afford, and the price of a pack of 5 cents has been going on for about 13 years.”

After the news was released, "The price of a pack of 50 cents of snow lotus has not risen for 13 years" and immediately became a hot search on Weibo.

"I went to a convenience store to buy ice cream. I stared at the label and saw that there was no one under 5 yuan. I turned to the ordinary supermarket next to it and bought a small pudding." Xiaoyu, who lives in Haidian, Beijing, shared.

When seeing the hot search on "Xuelian", Xiaoyu said, "I instantly thought of the ice cubes sold in the small shop at the school gate when I was a child. I really bought it at that time."

Fed up with the high-priced ice cream that usually costs more than a dozen yuan, a pack of 5 cents of ice cream hit the hearts of many consumers.

So netizens have turned into "tap water" of snow lotus ice cubes:

I am a superstitious person, if there is an unfortunate accident with Snow Lotus, or it is taken off the shelf, or at the bottom of the freezer, or maliciously spreads rumors, I will blame everyone in the freezer.

I love your tattered packaging, but dare to block Xue Gao's madness. I love that you are so similar to me, both worth the same, go?

With the humblest cake, the whimpering and roaring in the sweltering heat, who said that the expensive cake is a hero.

But wait a minute, are you sure it's the real "Snow Lotus" who are cheering for it now?

A reporter from China-Singapore Finance and Economics noticed that in just a few days of registration, the Douyin account named "Snow Lotus Ice Cube" has more than 700,000 followers.

In addition, the Douyin account also issued an announcement stating that the snow lotus ice cubes with stains and residues found on the Internet will be strictly dealt with by the local market supervision bureau after obtaining evidence, and will resolutely crack down on the products produced by scattered and poor enterprises. Problem ice cubes flow to the market, and Snow Lotus® will also conduct cooperative negotiations or legal prosecutions against companies that infringe their trademarks and patents.

The reporter found through Tianyancha search that Yi Xiaomeng (Linyi) E-Commerce Co., Ltd., the main body of the account registration, was established in April 2022, and the legal representative is Li Jiayou, holding 70% of the shares.

In the business scope of the company, there is only food sales (only prepackaged food), etc., and no food production projects.

And the company does not hold any registered trademarks.

Is the company a regular manufacturer of Snow Lotus?

Because the food production license is too vague to identify the specific information, the reporter asked by private letter account, but as of press time, no reply has been received.

As for the disclosed trademark registration certificate, the reporter searched the Trademark Office of the State Intellectual Property Office and found that the trademark was under review for the application for cancellation/invalidation, and the trademark applicant was displayed as Linyi Qibao Trading Co., Ltd.

Screenshot from the Trademark Office of the State Intellectual Property Office.

According to the National Enterprise Credit Information Publicity System, Linyi Qibao Trading Co., Ltd. was established in May 2014. The legal representative is Sun Qibao, holding 100% of the shares. Its business scope includes wholesale and retail of prepackaged food and bulk food, wine, beverages, etc. There is also no food production project.

Sun Qibao, the legal representative of Linyi Qibao Trading Co., Ltd., confirmed to a reporter from China-Singapore Finance and Economics that the "Snow Lotus Ice Cube" mentioned in Douyin was produced by the company.

Sun Qibao said, "We have been making snow lotus ice cubes since 2017, and we have partial authorization. The one who had the accident may be an impostor."

Regarding the price of ice cubes at 50 cents, Sun Qibao said, "The profit is still very thin, but the price has never been raised."

Sun Qibao also added, "It has been more than 20 years for snow lotus ice cubes, and the price has not increased." This is inconsistent with the above statement of "starting production in 2017".

It also contradicts what the person in charge surnamed Li said "the price of a pack of 5 cents has lasted for about 13 years".

When the reporter asked about this, Sun Qibao refused to answer on the grounds that he was very busy now and could go to the person in charge of the backstage of Douyin.

Who is the real "Snow Lotus"?

In many supermarkets and convenience stores in Beijing, the reporter did not see the "figure" of snow lotus ice cubes.

Searching for the packaged products displayed by Douyin "Snow Lotus Ice Cube" on the e-commerce platform did not find it either.

In addition, when searching for snow lotus ice cubes on the e-commerce platform, most of them are snow lotus sweet ice produced by Linzi Xuemeng Cold Drink Factory in Zibo City.

Screenshot from the e-commerce platform.

Some consumers said after purchasing, "It's the taste of childhood, and the ice cubes with Sprite flavor are very authentic."

According to Tianyancha, Zibo Linzi Xuemeng Cold Drink Factory was established in September 1996. The investor is Xie Jinliang, and its business scope includes the production and sales of frozen drinks.

However, it is also doubtful whether the snow lotus ice cube is the "ice cube" in memory.

But no matter who is the "ice cube" in memory, the 5 cents ice cream is rare among netizens.