Dragon Oil, the exploration and production platform wholly owned by the government of Dubai, has signed an agreement to renew the production partnership in Turkmenistan with the state-owned Turkmen Oil Company, which ends in May 2025, for an additional 10 years, with a total value of one billion dollars, to be paid of which 500 m 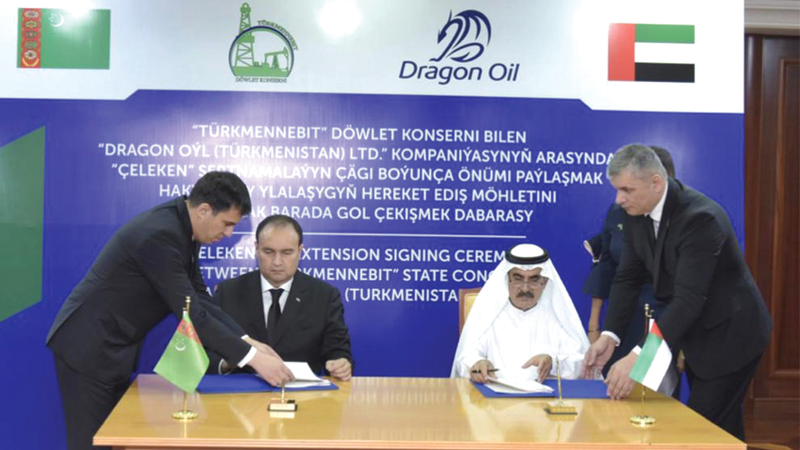 Dragon Oil, the exploration and production platform wholly owned by the government of Dubai, has signed an agreement to renew the production partnership in Turkmenistan with the state-owned Turkmen Oil Company, which ends in May 2025, for an additional 10 years, with a total value of one billion dollars, to be paid Of which $500 million is in cash, while the remaining $500 million is paid over 13 years, and includes the company's commitment and support for the Turkmen government's projects in community development, education, and public health.

The signing ceremony of the agreement, which was held in the Turkmen capital Ashgabat, was attended by the CEO of "Dragon Oil", Engineer Ali Al-Jarwan.

Saeed Mohammed Al Tayer, Managing Director and CEO of Dubai Electricity and Water Authority, Chairman of the Board of Directors of ENOC and Dragon Oil, expressed his happiness at the announcement of the extension of the production partnership, which is in line with the directives of the wise leadership of His Highness Sheikh Mohamed bin Zayed Al Nahyan. The President of the State, and His Highness Sheikh Mohammed bin Rashid Al Maktoum, Vice President and Prime Minister of the UAE and Ruler of Dubai, in confirming the strength of the company's commitment to strengthening its presence and firm presence in Turkmenistan.

He stressed that the company aspires to support the current expansion plans, while continuing to work during the coming period to launch more discoveries in a sustainable manner in this promising market.

Al Tayer added that the relations between the UAE and Turkmenistan are developing significantly, and are progressing at a steady pace with the injection of new investments that contribute to the development and consolidation of relations in various economic and investment fields.

He referred to the investments made by Dragon Oil, which has worked for more than 20 years in the field of oil and gas exploration in the Caspian Sea, to achieve mutual benefit.

He explained that the signing of this contract also represents a milestone in Dragon Oil's journey in sustainable strategic growth, and within the plan to complete growth and expansion in the markets operating in it, including Turkmenistan, Egypt and Iraq, by continuing to intensify exploration work, developing fields, and repairing wells to increase capacity. Productivity to 300,000 barrels per day by 2026, compared to about 160,000 barrels per day currently, according to its strategies and ambitions, which requires developing existing assets and acquiring new opportunities.

For his part, the CEO of "Dragon Oil", Engineer Ali Al-Jarwan, welcomed the signing of the agreement to extend the production partnership, pointing out that it represents a renewed commitment by "Dragon Oil" towards its viable investments in the oil and gas sector in Turkmenistan.

He stressed that the agreement will allow for more additional investments, complete plans to increase the company's production capacity, invest technology and creativity in supporting production, and shift to operational excellence to support economic feasibility.

It is noteworthy that Dragon Oil has evolved over the past decade from a single-origin oil company operating only in Turkmenistan, to a global operator and an international exploration and production platform, with production and exploration assets in Egypt, Iraq, Algeria and Afghanistan.

It follows a strategy that relies on innovation and the latest technologies, with the aim of diversifying its portfolio to achieve sustainable development and create value for its shareholders.

The Cheleken complex, located in the East Caspian Sea in Turkmenistan, is the main producing asset of Dragon Oil, and consists of two major offshore oil and gas fields, Lam and Zhdanov, that have been successfully developed and maintained since 2000. , plus another possible complex.

Over a 22-year period, the company has spent $8.1 billion drilling wells and establishing the appropriate production facilities to allow sustainable production, with cumulative production of 437 million barrels of crude oil.

The company's investments during the contract extension period are expected to reach between another seven and eight billion dollars, to support expansion and development programs, while future production levels range between 60 and 70 thousand barrels per day.

The expected cumulative production of crude oil from this extension is expected to reach 350 million barrels until 2035.