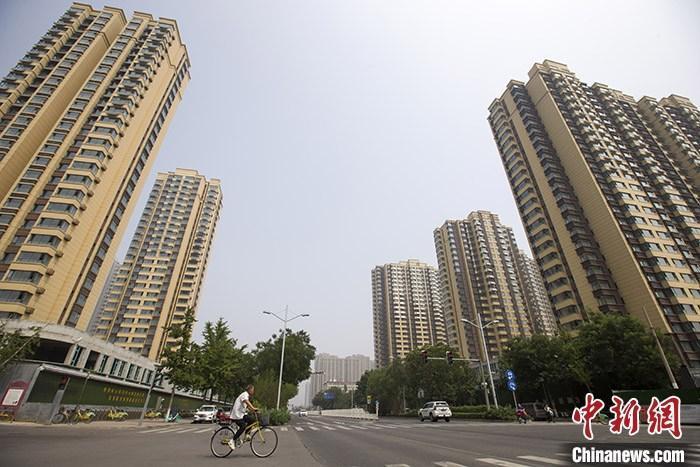 Data map: Citizens pass by in front of a real estate.

Jiyuan, a small city located in the northwest of Henan Province, has recently been "out of the circle" in the real estate industry.

According to the official WeChat account of the Jiyuan Real Estate Administration on the 29th, the Office of the People's Government of Jiyuan City, Henan Province issued the "Notice on Several Measures to Promote the Stable and Healthy Development of Real Estate in Jiyuan City", which mentioned "encourage real estate development enterprises to collect down payment in installments", It makes Jiyuan City "the first city in the country to officially allow down payment installments".

The specific expression in the "Notice" is: the down payment ratio for residents to buy their first home is reduced to 20%, and real estate development enterprises are encouraged to collect the down payment in installments, but the longest should not exceed one year; the phenomenon of housing loan supply will be cut off before May 31, 2023 , the repayment of principal and interest can be deferred, and it is not included in the scope of personal credit investigation for the time being, and it can be deferred for up to one year.

However, on June 30, the WeChat public account of the Jiyuan Real Estate Administration deleted the news, and the staff of the Housing Administration said they were "unclear" about the reporter's inquiries.

A real estate agent in Jiyuan City contacted by Zhongxin Finance and Economics reporter said that although there was no official document issued before, the down payment installment has actually existed in the market for a period of time, including in Zhengzhou, the capital of Henan Province, etc., will use this as a gimmick to attract buyers. .

"But if it is the official support, it will definitely be under a lot of pressure."

According to reports, there are mainly two ways to realize the down payment installment: one is that the developer or the developer contacts the relevant company to make an advance payment, and then repays the installment and interest on a monthly basis; the other is to increase the appraisal price, which is far more than The actual selling price to achieve "the more you borrow, the lower the down payment".

However, it is undeniable that both approaches have policy and legal risks.

In 2018, the Ministry of Housing and Urban-Rural Development, together with six departments, launched a special campaign to deal with chaos in the real estate market, including providing "down payment loans" or adopting "down payment installments".

Data map: A view of the city.

Compared with the official cautiousness about the launch of new tricks and tricks, developers are more bold.

For example, wheat garlic and melons, fruits, pears and peach may not have imagined that one day they will be able to realize their worth several times in the property market.

Jianye Real Estate, the "one brother of Henan" in the real estate industry, has become the founder of this round of fancy promotions.

Around June 20, two promotional posters for alternative real estate companies circulated on the Internet: in the Jianye Riverside House in Minquan County, Shangqiu, Henan Province, you can "2 yuan/catties, wheat to change the house"; in Qi County, Kaifeng City, Henan Province In Jianye City, you can "5 yuan/catties, garlic exchange room".

On the 22nd, the two sales offices confirmed the authenticity of the event to reporters, but in the evening of the same day, "Wheat Exchange" took the lead in "braking the brakes". The sales office staff said that the event had ended at noon on the 22nd. Similar activities are not yet known.

On the 23rd, the real estate staff also said that the activity had been suspended.

The staff member did not know the reason for the suspension of the activity, but speculated that it may be due to the recent pressure from public opinion.

However, the "Waterloo" of two agricultural product promotions did not stop the pace of similar activities, but instead attracted the debut of fresh fruits.

However, this activity is somewhat "light without rain". The salesperson contacted by the reporter said that the activity has not yet started, and the specific details need to be discussed.

Waiting for the watermelon to be ready, the peach can't wait to make its appearance.

On the 29th, a poster on the Internet showed that the first real estate project in Yangshan, Wuxi, Jiangsu launched the "I will collect the peaches, and I will help you when you settle down".

The salesperson of the event told the media that this is a promotional event launched by the company, which is equivalent to giving profits in disguise. It does not require farmers to use peaches for delivery, and they can enjoy discounted prices as long as they visit the house.

When the reporter called the real estate, the salesperson was also reluctant to talk about the details of the event, but said, "There are discounts, you can see when it is convenient to come to the sales office to discuss in detail."

In the activity of "Peach Exchange", Peach has become a dispensable "tool peach".

A similar situation also happened in the "Garlic House Exchange" activity, and some staff members bluntly told the media, "Actually, we don't accept garlic and we don't want garlic."

It is not difficult to see that under the gimmicks of a series of activities, the premium acquisition of developers is actually a price reduction in disguise.

The contradiction between "destocking" and "limitation order"

Instead of going to great lengths, why not just cut the price?

This is because from the second half of last year, the "drop limit order" introduced by more than 20 cities across the country is still in sight.

Take the Fujian Pingtan Comprehensive Experimental Zone as an example. The new policy on June 20 requires real estate development companies to sell commercial housing with an actual sales price not exceeding 15% of the recorded price.

The issuance of the "drop limit order" is essentially out of consideration for stability maintenance. In recent years, it is not uncommon for the group of homebuyers to suffer from the price reduction of real estate.

But at present, real estate companies have difficulty in sales and high debt pressure, which is also a reality that they have to face.

"In the first half of this year, housing sales in third- and fourth-tier cities fell by nearly 50% year-on-year, so innovative marketing models are also necessary." Yan Yuejin said that behind the developers' marketing tricks, there are huge local sales and destocking pressures. .

On June 30, the "Sales Performance Rankings of Chinese Real Estate Enterprises in the First Half of 2022" released by the China Index Research Institute showed that in the first half of 2022, the sales of real estate enterprises fell by 48.6% year-on-year.

"In this context, on the one hand, enterprises should seize the structural opportunities under the differentiation of cities and sectors, insist on getting the land and products right, and improve product and service capabilities; on the other hand, real estate companies should continue to pay close attention to sales receipt , optimize the debt structure, ensure cash flow and operational security, and seek high-quality development.” The Middle Finger Research Institute believes.