His Highness Sheikh Khalid bin Mohamed bin Zayed Al Nahyan, member of the Executive Council of the Emirate of Abu Dhabi and head of the Abu Dhabi Executive Office, launched yesterday the Abu Dhabi Industrial Strategy, in order to consolidate the position of the emirate as an industrial center considered the most competitive in the region.The Abu Dhabi government intends to invest 10 m 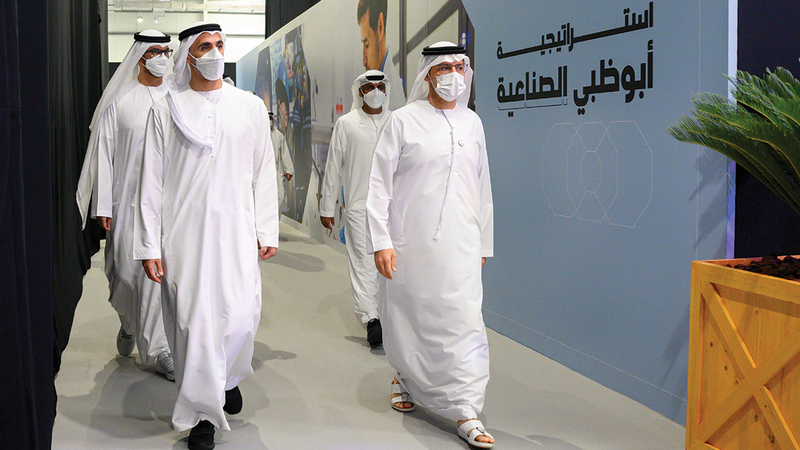 The Abu Dhabi government intends to invest 10 billion dirhams through six ambitious economic programs that seek to double the size of the manufacturing sector in Abu Dhabi, to reach 172 billion dirhams by 2031, by enhancing the ease of doing business, supporting industrial financing, and attracting foreign direct investment.

The strategy will also work, through its six programs, to provide 13,600 additional specialized job opportunities suitable for Emirati technical cadres, and to enhance Abu Dhabi's trade with global markets, including supporting efforts to diversify the economy by increasing the volume of non-oil exports to the emirate by 138%, to reach its value. To 178.8 billion dirhams by the year 2031.

The various initiatives included in the Abu Dhabi Industrial Strategy, which also include preparing a new regulatory framework for the circular economy, and adopting environmentally friendly policies and stimulus plans, will contribute to moving forward in promoting Abu Dhabi's transformation to a circular economy, and benefiting from the industrial sector that stimulates and encourages raising the level of responsibility in production. , rationalizing consumption through waste treatment, recycling, and smart manufacturing.

Falah Mohammed Al Ahbabi, Chairman of the Department of Municipalities and Transport and Chairman of the Abu Dhabi Ports Group, said: "The industrial strategy of the Emirate of Abu Dhabi is a major supporter of the great ambitions in the UAE towards developing tight economic strategies that contribute effectively to achieving economic development and consolidating the country's position within the trade and industry sectors. globals.”

Through the strategy, the development of the industrial sector will be accelerated, by integrating advanced Fourth Industrial Revolution technologies to drive growth, competitiveness and innovation, while enhancing sustainability in the industrial sector system, in line with the UAE's strategic initiative to achieve climate neutrality by 2050, and the National Plan for Climate Change.

New initiatives will also be implemented within the framework of the objectives of this strategy in order to drive growth across seven basic industrial sectors: chemical, machinery and equipment, electrical industries, electronic industries, connectors, food and agricultural industries, and pharmaceutical industries.

The strategy includes six programs that seek to advance development, refine skills, build an integrated system for local manufacturing companies and institutions, increase the volume of Abu Dhabi's trade with global markets, and facilitate the transition to a circular economy.

To advance the development of infrastructure to reach full integration, a fund will be established to invest in supply chain management, compensation will be provided to support industrial financing, and incentives will be provided to distribution channel partners to attract foreign direct investment. Infrastructure improvement programs in Al Ain and Al Dhafra region will strengthen the system Industrial sector.

In addition, Mohammed Ali Al Shurafa Al Hammadi, Head of the Department of Economic Development in Abu Dhabi, said in his speech during the launch ceremony of the strategy, that 10 billion dirhams were allocated to implement strategic industrial programs and initiatives that would enhance the competitiveness of the sector in Abu Dhabi.

He explained that these initiatives include incentive programs for paying fees, reducing the prices of energy, electricity, water and gas, and industrial lands, and the Golden List program, which aims to support local products within government purchases and semi-governmental companies, noting that the number of factories listed on the Golden List has reached 145. .

For his part, Director General of Economic Affairs at the Department of Economic Development in Abu Dhabi, Sameh Al Qubaisi, said that Abu Dhabi's industrial strategy was designed to enhance the transformation process from a linear economy to a circular economy by designing a regulatory framework for the circular economy, which serves as a guide for government and private sector investments, for operations more productive and sustainable, as well as supporting the green policy of procurement in government agencies and government-owned enterprises, and encouraging the use of Fourth Industrial Revolution technologies.

As for the Executive Vice President of Institutional Support at Abu Dhabi Ports, Abdullah Al Hamli, he revealed, in statements on the sidelines of the launch of the strategy, incentives to support smart industries in particular during the coming period, as the industrial zones already include smart industries, especially in the fields of food and medicine.

It also signed an agreement between the "Abu Dhabi Economy" and the German company Tough Sud, with the aim of developing and evaluating the industrial readiness "I4.0 IR".

In turn, the Abu Dhabi National Oil Company “ADNOC” and the Pharco National Oil Wells Company signed an agreement. The ceremony also witnessed an agreement between “ADNOC” and “Ingenia Polymers”, which will work to establish its first industrial facility in the UAE, to produce plastic dyes, polymer derivatives and other materials. plastic industry.

A new investment for the Abu Dhabi government with a total value of 10 billion dirhams.