Summer is approaching, is there any drama in travel?

China News Service, June 29th Question : Summer is coming, is there any drama in tourism?   China-Singapore Finance reporter Li Jinlei   The summer vacation is approaching, and there are many positive signals in the tourism market. The epidemic prevention and control situation is improving, prevention and control measures have been further optimized, the cross-provincial mobility policy has be 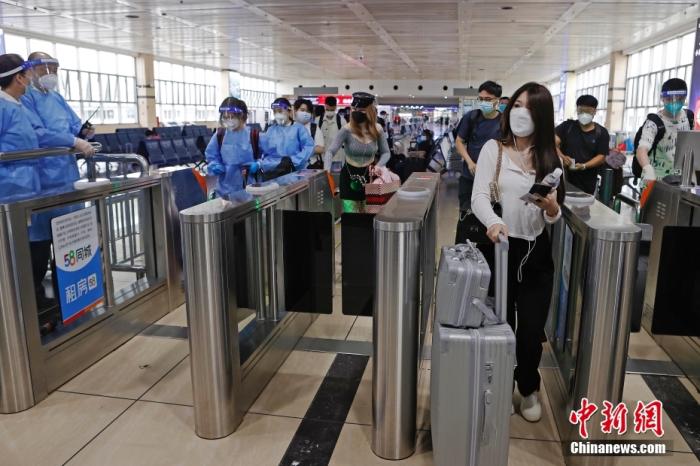 Question : Summer is coming, is there any drama in tourism?

The summer vacation is approaching, and there are many positive signals in the tourism market.

The epidemic prevention and control situation is improving, prevention and control measures have been further optimized, the cross-provincial mobility policy has been relaxed in many places, and the number of inter-provincial tourism resumption provinces has further increased. During the same period... the summer tourism market seems to be ushering in an upward "inflection point".

On the one hand, the situation of epidemic prevention and control is improving.

Lei Zhenglong, deputy director of the National Health Commission's CDC and first-level inspector, pointed out at a press conference on June 28 that in the past month, the overall situation of my country's epidemic prevention and control has stabilized and improved, and the number of positive infections has continued to decline. The number of areas with outbreaks is also decreasing.

On the other hand, epidemic prevention and control policies are more scientific and precise.

The new version of the plan

On June 10, passengers checked their tickets in order at the Shanghai Railway Station and entered the station.

As the national epidemic situation continues to improve, Hainan, Jiangsu, Qinghai and other places have successively adjusted the epidemic prevention policies for the movement of people across provinces.

Among them, Hainan has adjusted the epidemic prevention and control measures for returning and returning personnel. Before coming (returning) to Qiong, people from non-epidemic areas should go through boarding or other procedures for coming to Qiong with the green code of the health code. It is not mandatory to require a negative nucleic acid certificate; Before (returning to) Qiong, the nucleic acid negative certificate was changed to once within 48 hours.

With the control of the epidemic in Shanghai, many regions have relaxed restrictions on people from Shanghai. In particular, Jiangsu, Zhejiang, Anhui and other places around Shanghai have adjusted the health management measures for people coming (returning) from Shanghai. People-to-people exchanges between major cities in the delta region gradually resumed.

After the reopening of Universal Studios Beijing, Shanghai Disney Resort announced on June 28 that Shanghai Disneyland will resume operations on June 30, and ticket sales and annual card reservations will restart on June 29.

After the news was announced, searches for Shanghai Disney on various travel platforms skyrocketed.

According to Ctrip data, on the afternoon of June 28, the number of "Disney"-related instant visits soared by 655% month-on-month, which simultaneously drove the popularity of Shanghai city visits to nearly double.

According to the big data of Tongcheng Travel, within half an hour of the announcement, the search popularity of Shanghai Disneyland increased by 167% compared with the same time period yesterday, of which local tourists in Shanghai accounted for more than 40%.

The search interest for hotels around Shanghai Disney Resort has also increased, with regional hotel searches up 88% from the same period yesterday.

"After the test of the epidemic, Shanghai Disney's ability to reload and restart is of extraordinary significance to Shanghai. It is a sign of Shanghai's recovery of fireworks and daily prosperity. It is also expected to drive a strong rebound in the summer tourism market." Qunar CMO Huang Xiaojie It is believed that the huge radiation power of the "Disney effect" will further drive the resumption of work and production in Shanghai's cultural tourism industry, and inject another "strengthening shot" into the recovery of the national cultural tourism market.

Huang Xiaojie believes that theme parks are a very comprehensive business format, which has a significant driving effect on comprehensive consumption such as transportation, accommodation, catering, and fast-moving consumer goods.

For example, the reopening of the Universal Studios Beijing theme park on June 25 drove a nearly 50% increase in bookings at surrounding hotels over the weekend.

With the gradual stabilization of domestic epidemic prevention and control, if the major domestic theme parks can make good use of the traditional peak summer tourism season in July and August, it is expected to better stimulate local consumption.

The opening of Universal Beijing Resort and Shanghai Disney is expected to exert a "multiplier effect", driving the resumption of work and production, stabilization and recovery in the tourism and consumer markets in Beijing, Shanghai and the whole country.

In the past week, the number of hotel reservations in the country has exceeded the same period in 2019

Under the influence of various favorable factors, industry insiders believe that

the national summer tourism market is ushering in an upward "inflection point".

On the Qunar platform, in the past week, the number of hotel reservations nationwide has exceeded the same period in 2019.

Among them, the top ten popular destination cities with the highest increase are: Tianjin, Xiamen, Zhengzhou, Dalian, Urumqi, Sanya, Haikou, Shenyang, Beijing, Nanning, all of which increased by more than 80%.

Among them, Tianjin, Xiamen, Zhengzhou, and Dalian have more than doubled the month-on-month increase.

Among them, Shanghai-Sanya ticket volume increased by nearly 1.5 times.

Are you planning to travel across provinces this summer?