A partnership has been announced between Strata Manufacturing Company, Hyperganic, which specializes in artificial intelligence-based engineering platforms, with headquarters in Germany and Singapore, and the German company EOS for industrial 3D printing, to manufacture more efficient air conditioners globally. 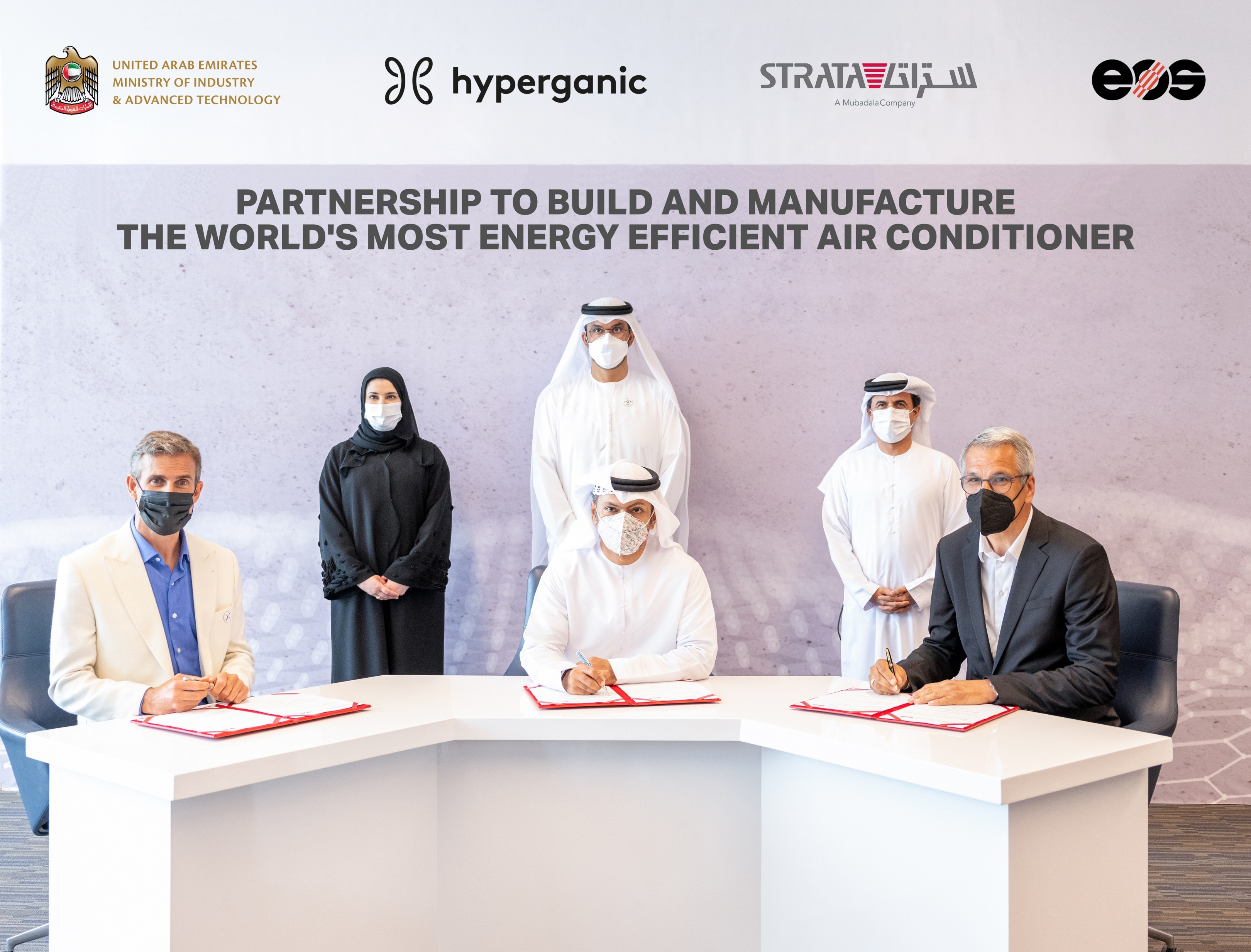 Coordinated by the Ministry of Industry and Advanced Technology

A partnership has been announced between Strata Manufacturing Company, Hyperganic, which specializes in artificial intelligence-based engineering platforms, with headquarters in Germany and Singapore, and the German company EOS for industrial 3D printing, to manufacture more efficient air conditioners globally. energy.

A statement said that this partnership comes as a result of the efforts of the Ministry of Industry and Advanced Technology in coordinating between partners in line with the ministry's role in creating an attractive business environment for local and international investors in the industrial sector.

The three partners concluded an industrial cooperation and partnership agreement during a signing ceremony attended by the Minister of Industry and Advanced Technology, Dr. Sultan bin Ahmed Al Jaber, the Minister of State for Public Education and Advanced Technology, Sarah bint Yousef Al Amiri, and the CEO of the investment sector in the UAE - Mubadala Investment Company, Musabah Al Kaabi.

Under the agreement, the partners will combine Algorithmic Engineering HyperGanic solutions with EOS 3D printing of industrial metals with advanced technologies provided by Strata to produce more efficient and less energy-intensive home air conditioning units. By up to 10 times, compared to conventional air conditioning units, which enhances its global competitiveness in the market.

This partnership, which takes advantage of the technologies of the Fourth Industrial Revolution, will contribute to increasing the energy efficiency of air conditioners, taking into account the highest international standards for environment and energy efficiency, achieving a qualitative leap in the industrial sector. The developments resulting from the partnership will be reviewed during the "COP 28 Summit" in the UAE, which It will be held at Expo City Dubai in 2023.

Sultan bin Ahmed Al Jaber, Minister of Industry and Advanced Technology, said that the partnership between Strata, Hyperganic and EOS confirms the ability of the industrial sector in the UAE to develop and launch commercially viable local products that meet the needs of local and global markets, thanks to The possibilities, incentives and advantages that make these products able to enter and compete in global markets, thus contributing to promoting the growth of the industrial sector in the country, and providing a positive impact on the national economy and society.

For her part, Sarah Al-Amiri, Minister of State for Public Education and Advanced Technology, said that the positive partnership represents a great addition to the industrial system in the UAE, and emphasizes the role of the Ministry of Industry and Advanced Technology in attracting global partnerships, especially the existing partnerships between Emirati companies and innovative companies in the world. Which relies on modern technological technologies and the techniques of the Fourth Industrial Revolution, in line with the leadership's vision of making the UAE a global headquarters for industries based on advanced technology.

"Made in the Emirates"

In the same context, the CEO of the UAE investment sector, Mubadala Investment Company, Musabah Al Kaabi, said: "As a responsible investor, we contribute mainly to (Mubadala) in enhancing the energy and sustainability strategy in the UAE through our global investment portfolio."

He added: “This partnership enhances the (Made in UAE) brand, through (Strata) focus on embracing digital transformation, and this cooperation is in line with its new strategy to expand its business beyond the aviation sector, and contributes further to enhancing the role of (Mubadala) accelerating the economic diversification of the UAE and enhancing its position as a global industrial center.”

As for Strata CEO, Ismail Ali Abdullah, he said that this partnership is a real leap for Strata based on investing in the technology of the Fourth Industrial Revolution, which will contribute to building new industrial areas in line with Strata’s strategy for advanced industries, and achieving the national vision to develop The industrial sector and the establishment of partnerships based on innovative solutions.

It is noteworthy that "Hyperganic" announced the opening of its office in the UAE at the beginning of next July, and its team, which is expected to grow to 20 engineers by the end of 2023, will cooperate with the work teams in both "Strata" and "EOS" to implement the project.