Zhongxin Finance, June 15 (Reporter Xie Yiguan) In recent years, the rise in international freight rates has exacerbated the production or sales costs of many companies, but the shipping industry has also benefited from it.   In the first quarter, shipping companies continued to ride on the "east wind" of high freight rates, and their performance "raised all boats." Data map: Shekou Port. Phot 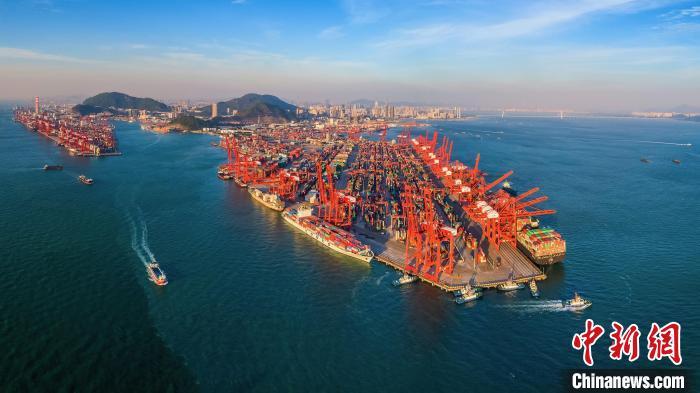 Zhongxin Finance, June 15 (Reporter Xie Yiguan) In recent years, the rise in international freight rates has exacerbated the production or sales costs of many companies, but the shipping industry has also benefited from it.

In the first quarter, shipping companies continued to ride on the "east wind" of high freight rates, and their performance "raised all boats."

How rich can shipping companies be?

Maersk's financial report shows that in the first quarter, revenue was 19.3 billion US dollars, a year-on-year increase of 55%, and earnings before interest, tax, depreciation and amortization were 9.1 billion US dollars.

Calculated, it is equivalent to earning about 100 million US dollars a day.

"We delivered our best quarterly performance ever, with growth in our marine, logistics and terminal businesses," said Maersk CEO Sorenscu.

Not only foreign shipping giants, but also Chinese shipping companies have made a lot of money.

Not only in the first quarter of 2022, but also in 2021, the performance of shipping-related companies has already risen.

And behind the industry's high prosperity is the high international shipping prices.

"In the early days of the new crown pneumonia epidemic, global trade fell off a cliff, and shipping capacity was largely idle. Ship owners around the world generally believed that this situation would continue for a period of time, and a large number of old ships were decommissioned and dismantled. As a result, the recovery of international trade was much faster than expected. New ships It has not yet been built, and the global industry transportation capacity shortage situation has suddenly intensified." Mei Xinyu, a researcher at the Institute of International Trade and Economic Cooperation of the Ministry of Commerce, told the China-News Financial reporter that with factors such as disordered overseas supply chains and shortage of port workers, international freight rates have soared.

Data released by Drewry, an international shipping research and consulting agency, shows that the container freight index has risen from $5,000 per 40ft container in March 2021 to over $10,000 in September, hitting a record high; then remained above $9,000 Slight fluctuations.

Entering 2022, the container freight index has adjusted somewhat. The freight index in April was about US$8,000, but overall it was still at a historically high level.

Highs were reached in January and February 2022, and have since retreated.

Now, a 40-foot high container is transported from Shanghai, China to Seattle, USA. "The freight is expected to be close to US$10,000, and the shipping price is relatively stable this year." A staff member of an international logistics company told reporters.

The rise in shipping prices has also led to the popularity of ships.

CMA CGM has announced orders for 16 ships in the past quarter; Swiss Mediterranean Shipping Company bought 169 containerships in 18 months.

According to foreign media reports, Greek shipowner Harry Vafias recently said that the shipping industry is enjoying the best market since the boom in 2007.

"Excluding VLCCs, which are currently losing money, all other container ships, LNG carriers, LPG carriers, crude oil carriers and product tankers are doing very well, and the prices of these ships are increasing every week."

At the end of March, Mai Boliang, chairman of CIMC Group, said at the performance conference that it is expected that the volume and price of the container business will be corrected this year from the high level of last year's container business, but it is expected to exceed the normal level of the industry, and the global supply chain is tight. There has not been a fundamental improvement. At present, container orders are full in the first and second quarters.

Think the shipping is too expensive?

U.S. wants to crack down on shipping companies

Under the bullish demand for transportation, some media reported that some freight forwarders revealed that large international airlines are planning to increase freight rates in mid-June. Price increases in the form of fees.

According to a report on the website of the Wall Street Journal on the 10th, US lawmakers are preparing to strengthen supervision of international shipping companies, as the White House and US importers and exporters say that historically high freight costs are hindering business development and accelerating inflation.

US President Biden also recently called on Congress to "crack down" on shipping companies.

He said recently that one of the main reasons for the rise in shipping costs is that nine ocean carriers dominate the trans-Pacific market, which "inflated prices by as much as 1,000 percent".

Since then, Biden said at the Port of Los Angeles, "A key way to curb inflation is to reduce the cost of moving goods through the supply chain."

Biden also called on the House of Representatives to pass the 2022 shipping reform bill passed by the Senate in late March.

The bill is also the largest overhaul of U.S. shipping rules since 1998.

"Biden and others made this decision out of political considerations, but if there are too many controls, it will increase the cost of shipping-related companies and industries." Mei Xinyu believes.