"Milk powder shortage" in the United States! "It's easier to find a gun than baby formula" 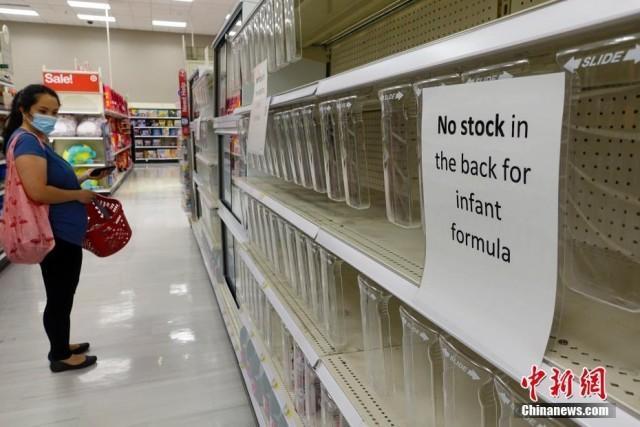 "It's easier to find a gun than baby formula"

On the 22nd, a U.S. Air Force military transport plane departed from Germany and arrived at Indianpolis Airport in the United States with 32 tons (about 70,000 pounds) of formula milk powder.

Behind this seemingly "funny" incident is the intensification of the recent shortage of baby milk powder in the United States.

In the past two weeks, U.S. supermarkets have been running out of milk powder stocks, and the shortage rate of infant formula in the United States has climbed to 43%.

Photo: On May 23, local time, a notice that "infant formula milk powder is out of stock" was posted on the vacant shelves of a large supermarket in New York, USA.

How tight is milk powder?

On the same day that the "military aircraft shipped milk powder", New York City Mayor Eric Adams signed an emergency executive order to declare a state of emergency in the city due to a severe shortage of infant formula.

The data shows that the normal milk powder shortage rate in the United States is 10%.

But in the past two weeks, product data company Datasembly disclosed that the shortage rate of infant formula in the United States is as high as 43%.

New York, which has entered a state of emergency, is not the "most short of milk powder" place.

The shortage rate in the three major regions of Nashville, Richmond and Houston in the United States has reached more than 55%, becoming the region with the most serious problem of "hard to find a can" of milk powder.

In response to the "milk milk shortage", U.S. President Joe Biden announced last week that he would authorize the use of military aircraft to transport scarce baby milk powder.

White House chief economic adviser Brian Deese said in an interview with CNN that the milk powder shipped on the 22nd is expected to solve 15% of domestic demand, and more milk powder can be put on the shelves as soon as a week.

These special formula milk powder produced by Nestlé will be a small shower of relief to alleviate the "milk powder shortage" in the United States, and will be provided to infants and young children with special dietary needs.

However, the effect of this action is worrying, and the shortage of baby milk powder appears to be continuing.

"It was a nightmare," one mother told The New York Times.

The trigger for the "milk milk shortage" in the United States dates back to last September, when a Minnesota baby was diagnosed with a potentially fatal infection after eating formula produced at Abbott's Sturgis, Michigan milk formula factory. of Cronobacter sakazakii.

In the months that followed, at least four more babies who had been given the factory's formula were diagnosed with infections, including three with Cronobacter sakazakii and one with Salmonella.

Two of the infants died of Cronobacter sakazakii infection.

Therefore, in February of this year, the US Food and Drug Administration (FDA) inspected the Abbott factory.

Shortly after, Abbott also announced it was closing its Michigan-based formula plant.

Although the FDA investigation finally showed that the infant infection was not related to Abbott, and the factory was able to restart, its closure still brought a considerable impact on the supply of the US milk powder market, making the supply chain that was already fragile during the epidemic worse.

Some people can't help but ask, why did the closure of a milk powder factory shake the U.S. milk powder market?

In fact, this reflects the serious monopoly of giants in the field of milk powder production in the United States.

Overall, three companies, Abbott, Mead Johnson and Nestlé, account for the vast majority of the formula market share sold in the United States.

"How did we end up in such a situation that three companies control 90 percent of the country's market?" Brian Diess said.

Data map: There is a shortage of milk powder on U.S. supermarket shelves.

easier to find a gun than baby formula

"It's easier to find a gun than baby formula," Meena Harris, a best-selling mother and niece of U.S. Vice President Kamala Harris, tweeted in the early hours of the 25th. .

John (pseudonym), who lives in the state of Houston, said that at present, many parents are anxious about not being able to buy milk powder. They drove for hours to buy a can of milk powder, but in the end they were unsuccessful.

With the increasing scarcity of milk powder, many parents began to search the Internet for "how to make milk powder at home" in desperation.

A photo of a family's baby milk formula from the 1960s then went viral on social platforms.

And this phenomenon has also caused "unease" among social media platforms.

Youtube, Facebook and Twitter have urgently censored content related to homemade milk powder. Facebook has flagged baby milk recipes from the 1960s as "false information", and several other social platforms have also labeled "homemade milk powder" as "false information". Search results are set to something similar to "Homemade baby milk is dangerous".

According to industry insiders, taking homemade formula milk powder may lead to the risk of epilepsy, iron deficiency anemia and growth retardation in infants, and the self-made process cannot achieve a good sterilization effect, and the food may breed bacteria.

The US Food and Drug Administration and the American Academy of Pediatrics have both issued relevant alerts, and the agency said it had received reports of infants hospitalized for calcium deficiency due to home-made formula.

However, the two agencies could not give any good solutions on how to solve the demands of parents who could not buy milk powder.

The American Academy of Pediatrics advises parents to check their local mini-mart, pharmacy, or online store for stock, and these suggestions clearly won't fix the problem.

U.S. Agriculture Secretary Tom Vilsack said on Twitter that Operation Formula Flight has shortened the time it takes for milk powder to travel from Europe to the U.S. from two weeks to three days, and that a second Defense Department military aircraft will fly for the U.S. Bring in more milk powder.

However, it will take some time for formula milk powder to be shipped to the United States and then distributed to supermarket shelves. It is still unknown how long it will take for anxious American parents to buy milk powder smoothly.