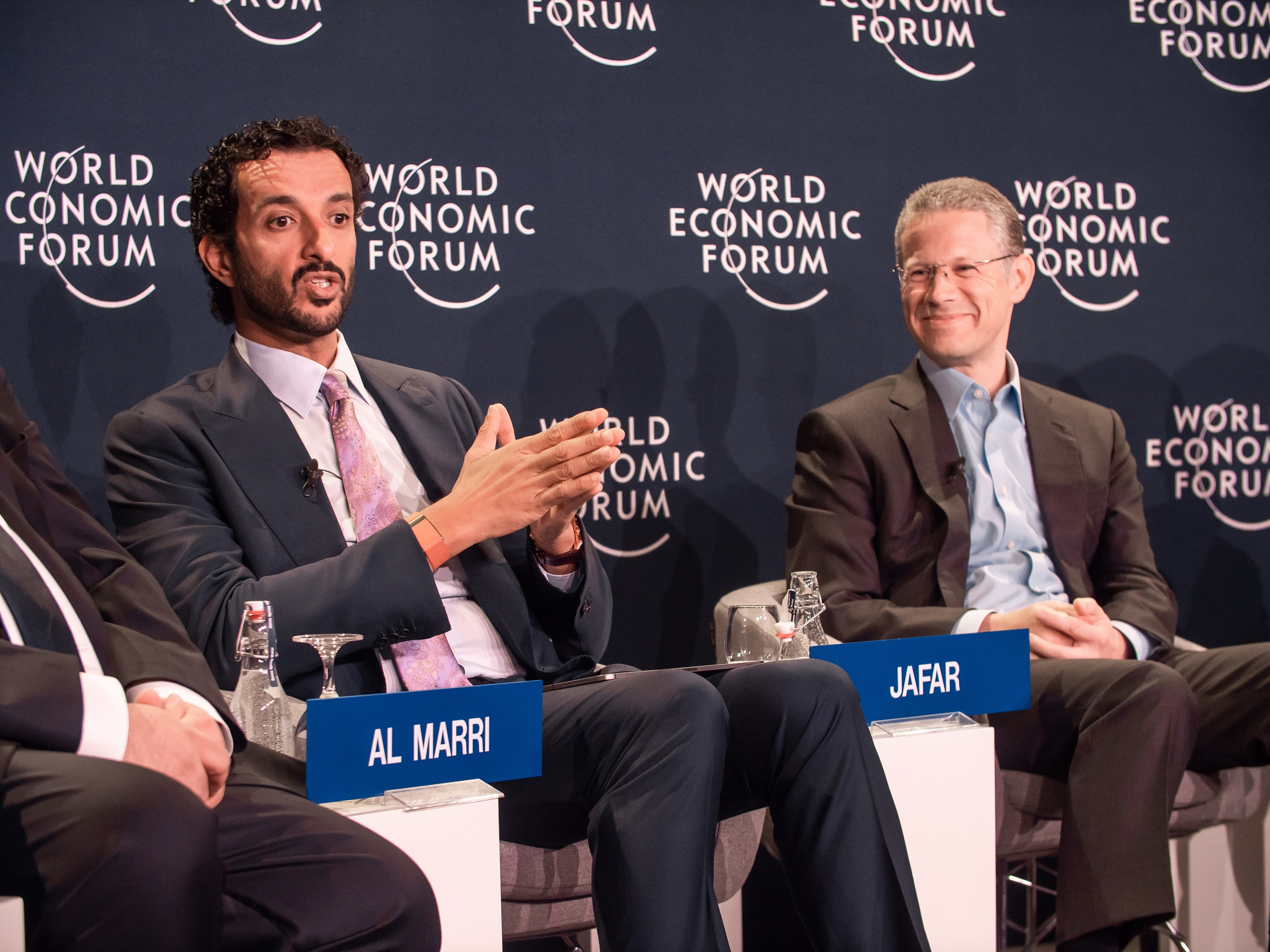 The forum focuses on six main axes, including restoring global order and regional cooperation, ensuring economic recovery, foreseeing a new era of growth, building healthy and just societies, protecting the climate and food and nature sources, leading the industrial transformation, and harnessing the potential of the Fourth Industrial Revolution.

The Minister of Economy, Abdullah bin Touq Al Marri, stressed that the UAE government is adopting an integrated national policy aimed at promoting sustainable production and consumption, enabling economic diversification, and developing new economic sectors in areas that serve sustainable development and the green economy, most notably promoting the transition towards clean and renewable energy. The circular economy applications are considered an imperative priority for the next stage, which supports the country’s objectives in transitioning to a new economic model that is more diversified, flexible and sustainable, and contributes to achieving global sustainable development goals.

During his participation in a session entitled: "Green Transformation in the Middle East", he added that the UAE government is committed to achieving more sustainable consumption and production, and meeting Goal 12 of the United Nations Sustainable Development Goals 2030, by shifting from the traditional economy model towards a renewable circular economy. In which consumption and production operate in a sustainable manner within environmental limits, ensuring the quality of life for current and future generations, indicating that this commitment is in line with the objectives of the National Green Agenda.

The Minister of Economy stressed that the integration of initiatives and circular projects in urban areas will contribute to achieving savings of 138 billion dollars in the countries of the Gulf Cooperation Council by 2030, equivalent to 1% of the cumulative GDP of the region in the period from 2020-2030, and will play a role in reducing Emissions by 150 million tons.

He said that the rapid changes that the world is witnessing require thinking about a new economic model that is highly flexible and ready for challenges, and can achieve sustainable and comprehensive economic growth, relying on technology and attracting talent, providing jobs in green sectors, and developing investment opportunities in technology sectors that will accelerate growth and maintenance.

For her part, Minister of State for Government Development and the Future, Ohoud bint Khalfan Al Roumi, reviewed the distinguished experience of the UAE government in implementing a new weekly work system since the beginning of this year, to be the first country in the world to adopt a brief weekly work system at the government level, with the possibility of applying hours Flexible work and teleworking system.

During her participation in a session entitled "4 working days a week... a necessity or a luxury?" A visionary leadership based on achieving proactiveness in consolidating the pillars of the future government.

The Minister of State for Governmental Development and the Future confirmed that the new abbreviated weekly work system adopted by the UAE with flexible work arrangements aims to improve the quality of life, achieve work-life balance, promote mental health, strengthen family ties and community relations, in addition to focusing on raising productivity levels. Supporting economic sectors, enhancing the UAE’s position as a global economic center, and its competitiveness among the most attractive countries for work and life in the world.

She added that the initial results for the first 3 months of implementing the new work system in the UAE government were promising, as they revealed a decrease in employee absenteeism levels by 55%, while 71% of employees reported that they spend more time with their families, while studies revealed that 70% of employees reported working more efficiently, being able to prioritize work throughout the week, and managing their time better.

For her part, Minister of State for Youth Affairs, Shamma bint Suhail Faris Al Mazrouei, affirmed that successive global crises have produced a new generation of young leaders who have redefined leadership concepts, to become based on the values ​​of innovation, active participation, and joint work to shape by themselves future global trends and come up with solutions. More sustainable and stable.

She said in a session entitled "Millennium Generation Leading the World", that the UAE, under the leadership of His Highness Sheikh Mohammed bin Zayed Al Nahyan, President of the State, and the directives of His Highness Sheikh Mohammed bin Rashid Al Maktoum, Vice President and Prime Minister of the UAE and Ruler of Dubai, placed its trust in the youth. It invested in their energy, believing that the youth are the source of hope, and today it is reaping the fruits of this insightful vision, thus establishing an advanced experience in building their capabilities and involving them in leading quality initiatives and projects and designing solutions to future challenges.

In the same context, Sarah bint Yousef Al Amiri, Minister of State for Public Education and Advanced Technology and Chairman of the Emirates Space Agency, stressed the importance of intensifying efforts and strengthening global partnerships in creating an incubating and stimulating environment for the entry of various economic sectors in the areas of investment in the space sector, which offers great future opportunities. In light of expectations that the size of the global space sector will reach one trillion dollars by the end of the current decade.

In an opening speech she gave in a session entitled "The Future of the Space Economy", she pointed out that the space economy will represent a vital sector for many governments seeking to diversify their economies by taking advantage of the technological solutions that the space sector is rapidly developing, which will open the way for new investments and unimaginable investment opportunities. It is unprecedented, which requires building effective partnerships that enhance the benefit of this sector, which will positively reflect on governments, societies and companies.

For his part, Minister of State for Artificial Intelligence, Digital Economy and Remote Work Applications, Omar Sultan Al Olama, affirmed that the UAE is keen to strengthen global digital alliances that support the uses of responsible artificial intelligence as a major means and tool in finding solutions to global challenges, and ensuring the optimal use of these technologies for the benefit of communities.

During his participation in a session entitled "Artificial Intelligence Responsible for the Good of Societies" as part of the annual meeting of the World Economic Forum, which is being held in the Swiss city of Davos, he said that global cooperation between governments and leaders of the private sector is an urgent necessity to issue legislation and laws regulating the uses of artificial intelligence, and to develop them so that they can be Apply it globally and across industries, sectors and businesses that directly benefit from AI and machine learning technology.

He pointed out that the UAE government has worked, through the Emirates Council for Artificial Intelligence and Digital Transactions, to develop and issue a personal data protection law, so that the law provides sound governance for data management and protection, preserving the confidentiality of information and the privacy of individuals within a comprehensive legal framework, and developing a deep forgery guide to ensure the regulation of Use this technology responsibly.

For his part, CEO of the Dubai Future Foundation, Khalfan Juma Belhoul, stressed that the UAE's vision for the future is based on comprehensive forward-looking planning, anticipating changes and preparing for them, as a pillar of its directions in developing and implementing its national strategies, and a key factor in enhancing readiness for present and future challenges.

During his participation in a session entitled "A Long-Term Outlook", he said that the Dubai Future Foundation is keen to achieve a balance between achieving the goals of short-term plans and developing and implementing long-term national strategies, through its various initiatives and projects based on designing and manufacturing the future, and employing modern technology and future visions to serve All members of society in the UAE, the region and the world.