Behind the screen of KFC's "Da Da Duck": fried to 500 yuan a piece, the food is making a comeback

Sino-Singapore Jingwei, May 23 (Zhao Jiaran) Have you been swiped by "Da Da Duck" these days?   Recently, a silly and cute Duck toy has appeared on social platforms. Although the shape and gameplay are simple, its magical posture and cute appearance still make everyone fall in love with it.   This magical Duck is one of the toys for the Children's Day package launched by KFC on May 21. From it 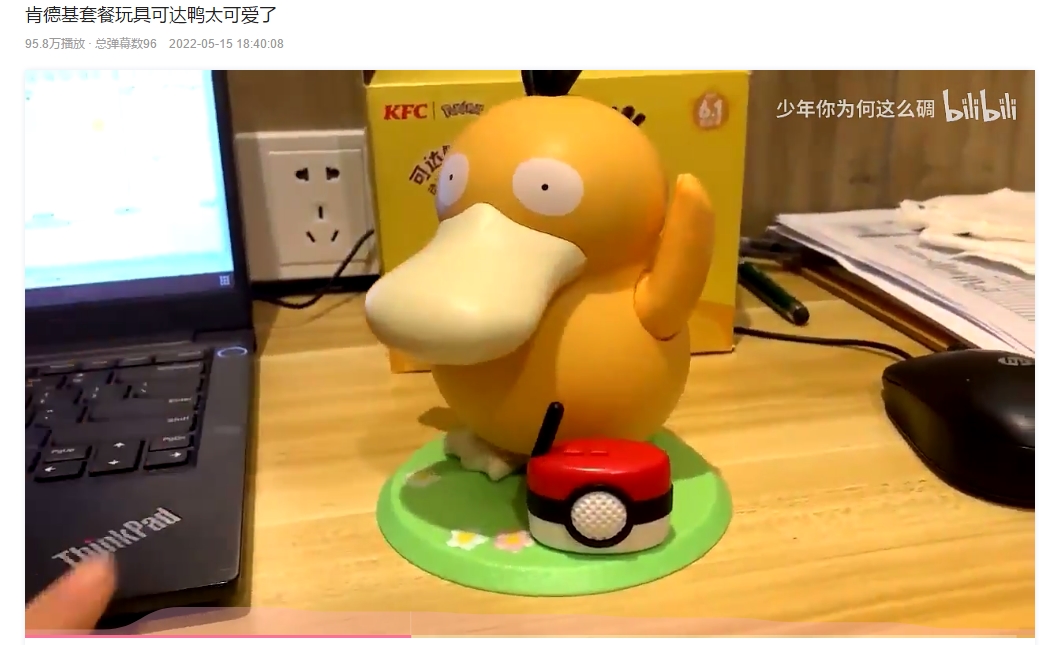 Sino-Singapore Jingwei, May 23 (Zhao Jiaran) Have you been swiped by "Da Da Duck" these days?

Recently, a silly and cute Duck toy has appeared on social platforms. Although the shape and gameplay are simple, its magical posture and cute appearance still make everyone fall in love with it.

This magical Duck is one of the toys for the Children's Day package launched by KFC on May 21.

From its small program, you can find that you can get a random Pokemon co-branded toy by purchasing a designated package ranging from 59-109 yuan, and Da Duck is one of them.

Sino-Singapore Jingwei found that after Da Duck became popular on the Internet, not only many KFC stores were out of stock, but the second-hand market also had the phenomenon of "substituting food" and hyping prices.

Mr. Du, who lives in Bao'an District, Shenzhen, told Sino-Singapore Jingwei that he went to almost every KFC store near his home on the morning of the first day when the Children's Day package was on sale, and all he got was the answer that "Kada Duck is out of stock" .

"I made two trips to KFC on the 21st and 22nd, and all I saw was that there were plenty of other toys in stock, but the Ducks were long gone."

Ms. Chen went to the KFC store in Jinhua, Zhejiang on May 23, and learned that the Duck was out of stock, and the next replenishment time is unknown.

"The clerk said that he didn't know when it would be available, and it was limited to 10 copies. It was sold at 9:30 in the morning (set meal). When I saw that there was no Duck Duck, I just left."

Searching for "Da Da Duck" on social platforms, you can see that netizens are divided into two groups: those who want Da Da Duck, and those who get Da Da Duck are showing off.

Among them, some bloggers uploaded multiple videos of Ducks dancing together, which were suspected by netizens to be snapped up maliciously, and they were suspected of being "scalpers".

"How can you buy so many? This is a gift for everyone on June 1, not for you alone!" "How about stocking up here?"

It's not uncommon to buy multiple children's packages online in order to get a toy.

Sino-Singapore Jingwei checked on the second-hand trading platform that there are many sales links for KFC Pokémon toys, especially Da Da Duck toys. The price of Da Duck ranges from 100 yuan to 500 yuan, and some sellers release multiple Stock photo of a da duck.

the price of just one package of toys is already more than 8 times the price of the package itself (calculated at 59 yuan).

In addition, there are people who put up signs of "eat on behalf of others" on the Internet, that is, the buyer pays to buy the set meal, and the seller eats the food in the set meal and mails the toys.

Some people say "the heat belongs to me, the toys belong to you", and some people bluntly say "it's just greedy".

Sino-Singapore Jingwei observed that the price of some substitute meals has also been higher than the price of the package itself.

"I can accept a set meal with friends in order to get toys, but if I spend the money of the set meal to buy and eat on behalf of someone else, doesn't that mean I invite strangers to dinner? When I think of this, I'm very 'down' (ie. Suddenly lost interest).” Ms. Wen from Shanghai asked a friend on the 22nd to contact a person who could buy Daduck toys on her behalf, but the other party offered to make her pay for the package fee and postage, so she dismissed the idea.

Sino-Singapore Jingwei consulted KFC's official customer service. The customer service said that they were not clear about the store's toy inventory and sales policies, and needed to consult the specific store.

Subsequently, Sino-Singapore Jingwei called the KFC Beijing Beixinqiao store as a consumer. The staff said that all Pokemon toys have not been replenished since they arrived on the 21st, and they have all been given away on the same day.

When asked if the sales of Pokémon-related packages are limited, the staff said, "If there is stock, you can buy as many packages as you want."

At the beginning of 2022, KFC was named and criticized by the China Consumers Association for giving away Bubble Mart's co-branded toy "Dimoo" in the package, which caused consumers to spend money to find "food substitutes".

At that time, there were 7 toys matched with the KFC package, which were randomly distributed in the form of blind boxes, of which there was a 1:72 probability of hidden models.

In order to collect all the toys, some consumers did not hesitate to spend 10,494 yuan to buy 106 sets of meals at one time; some consumers bought the "eat-for-you" service for "seeking a baby", hired someone to buy the meal-for-you package and obtained a blind box, and even appeared. The phenomenon of throwing away uneaten food directly.

The China Consumers Association pointed out in the article that the fast food operated by KFC is a commodity with a limited period of time, and the characteristics of this kind of commodity are purchase on demand and instant consumption.

Less than half a year later, KFC's co-branded IP toys have sparked a craze again. Although there is no "hidden model", the phenomenon of eating and hyping toys is the same as at the beginning of the year.

Jiang Han, a senior researcher at Pangu Think Tank, said in an interview with Sino-Singapore Jingwei that when health became the core pursuit of most Chinese people, "foreign fast food" gradually lost its development potential, so "KFCs" were forced to leave themselves. the comfort zone, and start the game of cross-circle marketing.

It has been observed that KFC has launched limited-edition products, which has caused speculation and food substitutes more than once or twice.

Although co-branded toys like the current DA Duck also have the function of social currency, they are essentially the product of corporate marketing activities. Consumers must remain rational and have a deep understanding of whether they need such products

. If they are interested , and if you can buy it, then it is understandable to participate in the purchase; if you need to buy second-hand at a high price and pay someone to eat it, it will not make much sense." Jiang Han said.