Audi advertising plagiarism, apology is not the end! Is Andy Lau liable?

Zhongxin Finance, May 22nd (Ge Cheng) On May 21st, Audi and Andy Lau's commercial film "Little Man" attracted attention, but that night, Douyin blogger "Peking University Mange" released a video saying that Audi released 's advertisement allegedly plagiarized his video copy.   In the video released by "Peking University Brother Man", Brother Man himself said that in the 17 years he has been wor 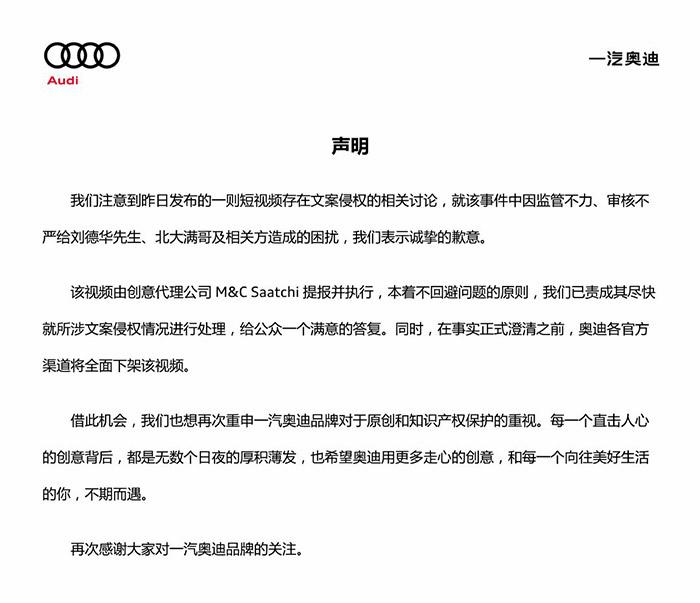 In the video released by "Peking University Brother Man", Brother Man himself said that in the 17 years he has been working in the Internet industry, this is the first time that he has been carried by commercial advertisements almost "word-for-word".

He also said that he was very disappointed with the relevant commercial advertisements. Some netizens left messages after watching the relevant advertisement videos to ask him whether he was suspected of plagiarism, which caused him a lot of trouble.

On the morning of the 22nd, in response to the alleged plagiarism of the new commercial, Audi issued a statement on its official Weibo, saying that there was a discussion about copywriting infringement in a short video released yesterday. , Peking University Mange and related parties apologize.

Advertising creative agency: will do its best to make up for the loss of the original author

According to a statement from Audi, the creative agency M&C Saatchi (Shangsi Advertising) was responsible for the video.

On the afternoon of the 22nd, Shangsi Advertising, the creative agency of Audi Xiaoman advertising, issued a statement saying that the company's Audi service team is the Audi Xiaoman brand video development team. In this case, I directly used the Chinese video content of Douyin blogger Peida Mange about "Xiaoman", which caused great inconvenience and trouble to Andy Lau, Peking University Mange, and FAW Audi brands. The author apologizes and promises to do his best to make up for the loss to the original author.

Shangsi Advertising also promises to respect and protect the rights and interests of original authors in advertising creation, and strictly prevent this from happening.

Image source: A statement issued by the official WeChat account of Shangsi Advertising.

Advertising director Zeng Weibo: Thank the client for "one draft"

According to multiple media reports, on May 21, Peng Yangjun, the director responsible for filming this commercial video, once said on Weibo that the commercial for "Little Man" was the most relaxing and enjoyable one he had directed, and he thanked the client for " One draft."

At present, the Weibo has been deleted.

Yan Bing, director of Beijing Yuntong Law Firm, told Zhongxin Finance that this incident is not a typical advertising infringement. In simple terms, it can be understood that a movie was shot without the authorization of the script or the original author. Audi's video It is only used for advertising, and it is a case of "advertising infringement" in a broad sense.

Therefore, such acts of plagiarism or plagiarism should be considered copyright infringement.

——Is Andy Lau liable for plagiarism in Audi advertising?

A number of legal professionals told Zhongxin Finance that in this incident, Andy Lau was not responsible for advertising infringement.

Yan Bing believes that this incident is neither a direct violation of the "Advertising Law" nor a situation where the endorsement product has quality problems, so Andy Lau will not bear legal responsibility because of his identity as an advertising spokesperson.

Zhao Zhan, a special researcher at the Intellectual Property Center of China University of Political Science and Law, a well-known IT and intellectual property lawyer, told Zhongxin Finance that in this case, firstly, there is no evidence to show that Andy Lau has never used an Audi car; secondly, it is difficult for Andy Lau himself to judge the article Whether the advertisement is a false advertisement; more importantly, Andy Lau himself cannot judge whether the relevant copy is plagiarized.

Therefore, he also believes that this case does not meet the situation that the advertising spokesperson needs to be responsible.

Yan Bing also said that although Audi's advertising infringement incident will not involve Andy Lau's legal liability for the time being, it may have an impact on Andy Lau's reputation, so he suggested Audi to properly handle the aftermath to avoid losses to Andy Lau.

If Mr. Andy Lau can prove his ignorance of the advertising copy, he does not constitute joint infringement with Audi and does not need to bear the tort liability.

——What responsibility should Audi take?

Can you throw the blame on the advertising company?

In a statement, Audi mentioned that the video was submitted and executed by a creative agency.

Yan Bing said that according to experience, a large manufacturer like Audi will formulate very strict intellectual property compliance clauses and a transfer mechanism for infringement liability when signing contracts with advertising business service entities, but this does not directly exempt Audi from its own responsibility. , the consequence is only that Audi can recover the losses suffered by the infringing advertisement from the creative agency according to the relevant clauses.

Therefore, Yan Bing believes that Audi is the main body of direct responsibility, not just its so-called "lack of supervision and lax audit". Audi should raise awareness to avoid future troubles.

What are the responsibilities of an advertising agency?

Chang Sha believes that the agency is the creator of the advertisement, and whether it bears tort liability for "Peking University Mange" depends on the contract between it and Audi.

Zhongxin Cai Review: Apology is not the end of Audi advertising plagiarism

Illegal infringement is no small matter.

The impact of Audi advertising plagiarism will not be eliminated in a short time with an apology.

At present, the protection of intellectual property rights stimulates the imagination and creativity of the public and better promotes economic and social development.

On the contrary, brand companies rely on "plagiarism" for marketing, which not only fails to promote the brand, but the more the advertising copy is on the screen, the greater the negative social impact and the more embarrassing the brand image.