Handi Maotai, which was once offered for nearly 10 billion yuan a bottle, ended in passing

Zhongxin Finance, May 21 (Reporter Xie Yiguan) Do you still remember the Handi Maotai that sold for nearly 10 billion yuan a few days ago. After the auction was suspended by the merchant, it was put on the shelves again, but the auction ended on the evening of the 20th. . It has been quoted nearly 10 billion yuan because it can be exempted from paying the deposit   On the evening of the 20th, 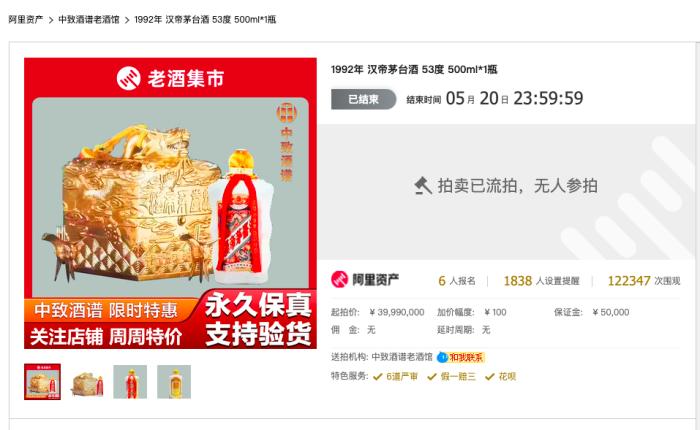 Zhongxin Finance, May 21 (Reporter Xie Yiguan) Do you still remember the Handi Maotai that sold for nearly 10 billion yuan a few days ago. After the auction was suspended by the merchant, it was put on the shelves again, but the auction ended on the evening of the 20th. .

On the evening of the 20th, a reporter from Zhongxin Finance and Economics logged on the auction platform and found that the 1992 Handi Moutai liquor sent for auction by the Zhongzhi Jiupu Old Tavern had ended at 23:59:59 on the evening of the 20th, with 6 people signing up and 1,838 people. Set a reminder, 122,347 onlookers, but because no one bid, the auction ended.

Screenshot from the auction platform.

A few days ago, this lot had undergone a "monkey-crossing" quotation, and was finally quoted at an astonishing price of 9.99999999 billion yuan, only "one step away" from 10 billion yuan.

It is understood that the starting price set at that time was also 39.99 million yuan, but the difference was that the deposit was 2,000 yuan. At the same time, the auction business stipulated that if you pay attention to the store, you can be exempted from paying the deposit.

Because you only need to pay attention to the store and do not pay the deposit, you can participate in the auction, and you can also refuse to pay after the auction is successful.

This led to an "auction spree".

After this unusual auction attracted attention, on the evening of the 16th, Ali Auction posted on Weibo that a bottle of 1992 Handi Moutai was launched this time at #520Investment Festival.

During the bidding process, it was found that some users were suspected of malicious bidding, resulting in the bidding price far exceeding the valuation, and the merchant decided to temporarily suspend the auction.

The reporter noticed that after the auction was put on the shelves again on May 17, the deposit has been changed from 2,000 yuan to 50,000 yuan, and it cannot be exempted by paying attention to the store.

No bidding threshold was set, and merchants were questioned for hype

However, in the auction of such an expensive Moutai liquor, the merchant did not set the corresponding bidding threshold before, and it was also complained by netizens, "The subject matter of 3999W does not require a deposit, can you be more serious." Some netizens even doubted whether this was malicious speculation.

According to media reports, some people in the industry questioned that this was an insincere marketing campaign whose purpose was to "gain attention" and "pull traffic."

The reporter's inquiry found that the old tavern of Zhongzhi Jiupu had been involved in many sales contract disputes. The reason for the dispute was that the Panama International Gold Award Memorial Wine 53% 30L 60kg Kweichow Moutai was not delivered to the buyer, which was later delivered by the court.

What is the origin of the Handi Maotai, which was quoted at such a high price?

According to public information, Handi Moutai is a luxury wine variety produced by Moutai in Guizhou. It was introduced in 1992. On the packaging of its wine box, the gold beads contained in the dragon's mouth are made of pure gold.

Only 10 bottles were produced at that time, and except for one bottle, the remaining 9 bottles were auctioned in Hong Kong, China.

In the late 1990s, Handi Moutai sold for a high price of 1 million Hong Kong dollars.

In April 2011, at the "First Vintage Moutai Special Auction" held by the Guizhou Provincial Auction Company, a bottle of "Hardcover Handi Moutai" was sold for 8.9 million yuan, which refreshed the auction price of Handi Moutai at that time. historical records.

Later, at the Tianjin Food and Drinks Fair in 2019, the value of Handi Moutai was as high as 31 million yuan.

The auction starting price of 39.99 million yuan in the old pub of Zhongzhi Jiupu has once again refreshed the price record of Handi Moutai.

Over the years, Moutai has also been a frequent visitor to the auction table.