Zhongxin Finance, May 20 (Ge Cheng) Recently, the multinational car company Porsche has encountered collective rights protection for the practice of "reducing the distribution" and not "reinstalling", and the compensation plan is "different inside and outside" .   The accessories targeted by car owners' rights protection are mainly concentrated on the electric steering column. Porsche had promi 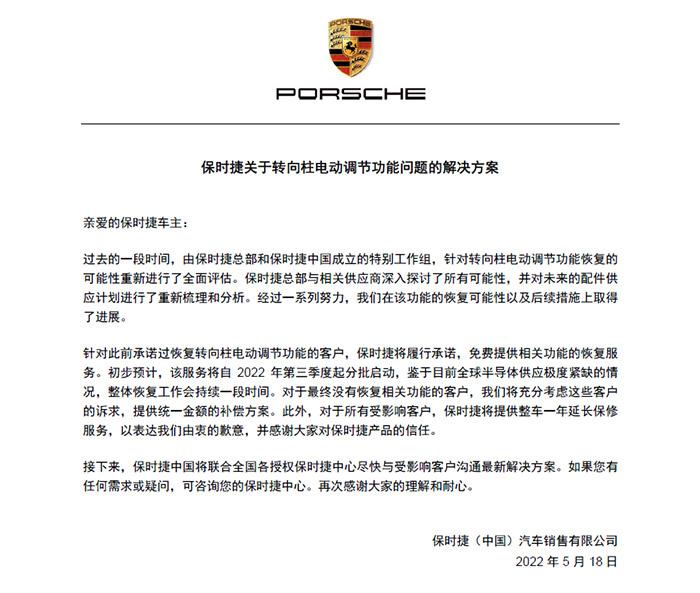 has encountered collective rights protection for the practice of

"reducing the distribution" and not "reinstalling", and the compensation plan is "different inside and outside" .

The accessories targeted by car owners' rights protection are mainly concentrated on the electric steering column.

Porsche had promised to add the feature to owners who had it optional or standard when the chip arrived, but later backtracked.

According to several media reports, in the Chinese market, Porsche provided car owners with a plan to delay the replacement due to chip shortages when purchasing a car, but recently told car owners that they would no longer re-install the electronic steering column, and the

official compensation was only 2,300 yuan in vouchers.

In the North American market, Porsche has installed the hardware and mechanical parts of the electric steering column, but the chip is missing, and because of the replacement of the configuration, Porsche US officials will

, and send an email to notify the relevant car owners in advance.

Many people in the industry believe that Porsche's move is suspected of "double standards", the compensation plan for domestic and foreign consumers is not unified, and Chinese consumers are suspected of being "discriminated".

Some comments pointed out that in the face of increasing consumer complaints, Porsche only stated in its apology statement that it would compensate for the thousand-yuan voucher for next use.

It's just fooling around.

I hope Porsche can come up with a decent remedy for consumers to buy it as soon as possible.

Companies that do not respect consumers will eventually pay for their arrogance.

Under multiple pressures, Porsche issued a statement on the evening of May 18.

It said that Porsche will provide previously committed customers with a free restoration of the electric steering column adjustment function.

Porsche customer service also stated that for customers who did not restore services in the end, Porsche will authorize the provision of 13,800 yuan vouchers, and will provide affected customers with a one-

service for the entire vehicle.

With decades of development, China has become the world's largest auto market.

According to data from the China Automobile Association, in 2021, domestic car sales will be 26.275 million units, accounting for about one-third of the total global car sales, ranking first for 13 consecutive years.

At the same time, China has been the largest single market for Porsche brand in the world for seven consecutive years.

one-third of its total global sales

However, in this incident, Porsche did not appear to be "generous" to consumers in the Chinese market, and even a little "inattentive".

Porsche also mentioned in the statement that the current global semiconductor supply is extremely short.

this fact does not become the reason for Porsche's "double standard" in front of Chinese consumers.

In fact, the car company that lacks chips is not Porsche.

Since last year, the automobile industry has generally encountered "core shortages", and many car companies have stopped and reduced production as a result.

In response to the temporary shortage of some chips, many car companies, including Ideal and Xiaopeng, have stated that car customers can choose to "pick up the car first and then assemble it" to deliver the car.

That is to say, let the user pick up the car and use it, and then the car company will be responsible for installing it after some chips arrive. This approach can not only allow users to use the car in time, but also relieve the car company's "urgency."

However, when it comes to Porsche, it seems that the taste has changed. Not only does it promise that the owner can't do it, but also there are differences inside and outside, and the compensation is different.

Such an approach will undoubtedly make consumers who have bought a car chilled.