Lebanon: traditional parties return in force to Parliament despite the breakthrough of the challenge

The first legislative elections in Lebanon since the beginning of the crisis, in 2019, were marked by a return of the traditional parties, a breakthrough of protest candidates and a strong abstention... 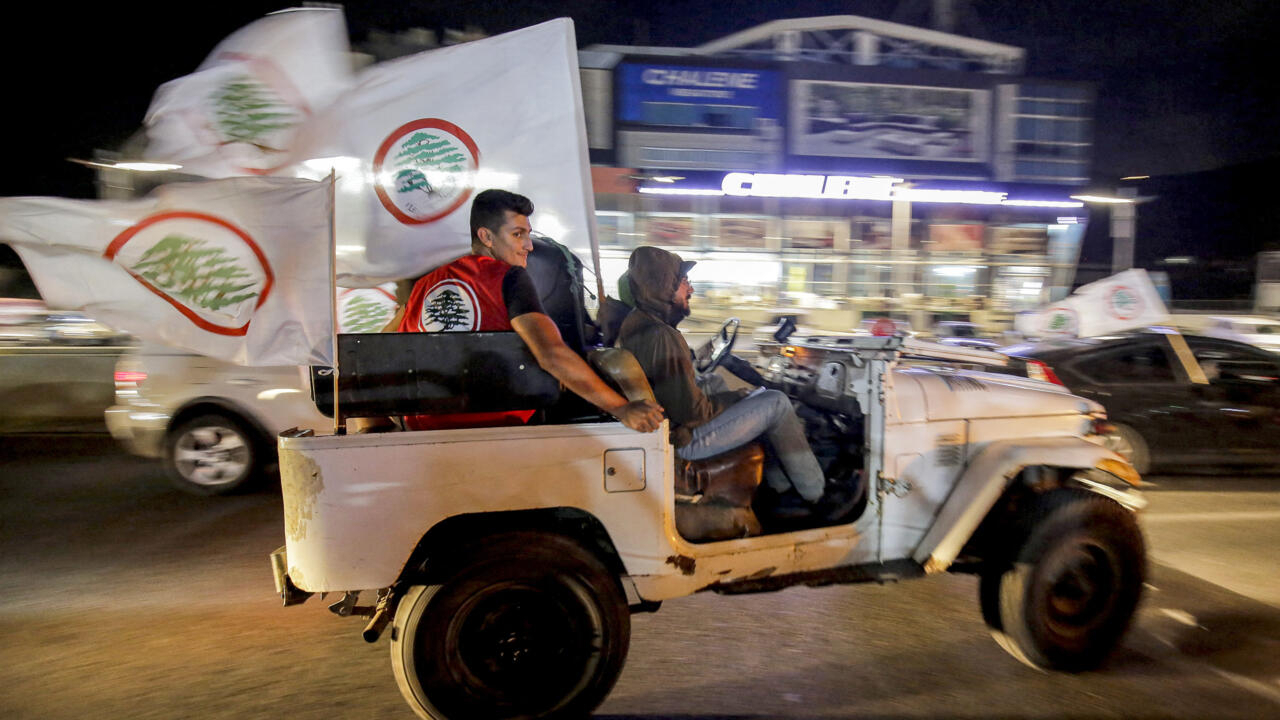 Lebanon: traditional parties return in force to Parliament despite the breakthrough of the challenge

Supporters of the Lebanese Forces party celebrate in the coastal town of Batroun, northern Lebanon, on May 15, 2022. AFP - IBRAHIM CHALHOUB

The first legislative elections in Lebanon since the start of the crisis, in 2019, were marked by a return of the traditional parties, a breakthrough of protest candidates and strong abstention among Sunnis.

My feelings are shared.

The commentary by Sylva, an architect in her thirties, who participated in the vast anti-power demonstrations, sums up with relevance the result of the legislative elections organized on Sunday May 15 in Lebanon.

This first ballot since the start of the protest, in October 2019, took place

, in the shadow of

measures taken by the army, which deployed tens of thousands of men on the whole territory.

Over the past three years, the Lebanese have made the political class assume the collapse of their purchasing power, the explosion of unemployment, the loss of their bank savings and the generalized impoverishment which now affects 80% of the population. .

This anger, however, did not manifest itself in an electoral tidal wave intended to sweep away the traditional parties, deemed responsible for the misfortunes of the Lebanese.

The residents' turnout, which stood at 41%, down six points from the 2018 legislative elections, benefited the traditional parties.

I am disappointed with Michel Aoun, for whom I have voted for the past fifteen years

, explains Tony, a former executive of the Free Patriotic Movement (CPL) founded by the Head of State, now led by his son-in-law Gebran Bassil.

But I wouldn't give my vote to other parties or candidates.

I prefer to abstain

Lebanon's former foreign minister and parliamentary candidate Gebran Bassil (C) is hugged by a woman as he meets supporters at his residence after voting ended in the parliamentary elections in the northern city of Batroun on May 16, 2022 AFP - IBRAHIM CHALHOUB

The big political families have a hard life

Despite the resentment of a large part of the Lebanese, the traditional parties, in power or in opposition, and which were thought to be dead two years ago, have pulled out of the game. They will remain in the majority in the new Parliament.

The representatives of the great families who have dominated political life for decades, sometimes for more than a century, such as the Joumblatt (Druze), Gemayel, Frangié, el-Khazen (Maronites), were also re-elected.

On an arithmetic level, the loser of these elections is the CPL.

With about fifteen elected members out of the 128 deputies in Parliament, Hezbollah's ally sees its parliamentary group amputated by several seats.

It can no longer claim to have the largest Christian bloc.

This title goes to its rival and sworn enemy of Hezbollah, the "Lebanese Forces", which are undoubtedly the big winners of this election with a bloc of about twenty Christian deputies.

Samir Geagea had anticipated this victory on Sunday evening, saying that his party was now the largest Christian formation in the country.

Remarks that must be placed in the context of the next presidential election, scheduled for the end of October.

The highest state office is traditionally held by a Maronite Christian.

Gebran Bassil also had claimed victory while half-acknowledging that his bloc would come out of this consultation diminished.

The idea of ​​eliminating the CPL failed, because our bloc will represent all Lebanese regions

war waged by the United States and Israel

Hezbollah, the object of all attention in Lebanon and elsewhere, emerges neither victorious nor defeated from this election.

The pro-Iranian party, which has a formidable armed wing to "

", will not be able to maintain a majority in Parliament with its allies from other communities.

At the same time, he won with the Amal movement the 27 seats reserved for Shiites, which makes them, with his ally, the exclusive representatives of this community.

This means that the outgoing Speaker of the House (a position reserved for Shiites), Nabih Berry, will undoubtedly be reappointed.

Supporters of the Lebanese Shiite groups Hezbollah and Amal raise their flags during a motorbike rally after the legislative elections in the southern suburbs of the capital Beirut, May 15, 2022. AFP - IBRAHIM AMRO

Another highlight of these elections was the breakthrough of candidates from the protests, who won a dozen seats going to different communities.

Their presence in Parliament will be significant, but not sufficient to impose reforms or initiate political change without alliances with traditional parties.

The low turnout of Sunni voters also holds the attention of observers.

In Beirut and in the country's major cities, members of this community turned out to vote in fewer numbers than usual, despite appeals from Dar al-Fatwa, the country's highest Sunni religious body, and efforts of mobilization deployed by the ambassador of Saudi Arabia, Walid al-Bukhari, returned urgently to Beirut in April.

The sulking of the Sunnis is a sign of solidarity with their leader, former Prime Minister Saad Hariri, pushed into early political retirement by Saudi Arabia in January.

Fragmentation is the main feature of the post-election landscape, raising fears of greater political polarization.

This will probably result in institutional blockages, at a time when Lebanon urgently needs an executive power with a large margin of maneuver to adopt the reforms essential to relaunch the economy.