IE browser will be retired, and it has become a "laughing stock" from its peak in 27 years

Zhongxin Finance, May 17 (Reporter Wu Tao) "Microsoft's IE browser will be officially retired on June 16". Although Microsoft has hinted before, but in the end, Microsoft officially announced the news on the 16th.   This topic once rushed to the hot search on Weibo, and many netizens said that the IE browser has witnessed the youth of several generations, "E-net is deeply in love" has become hi 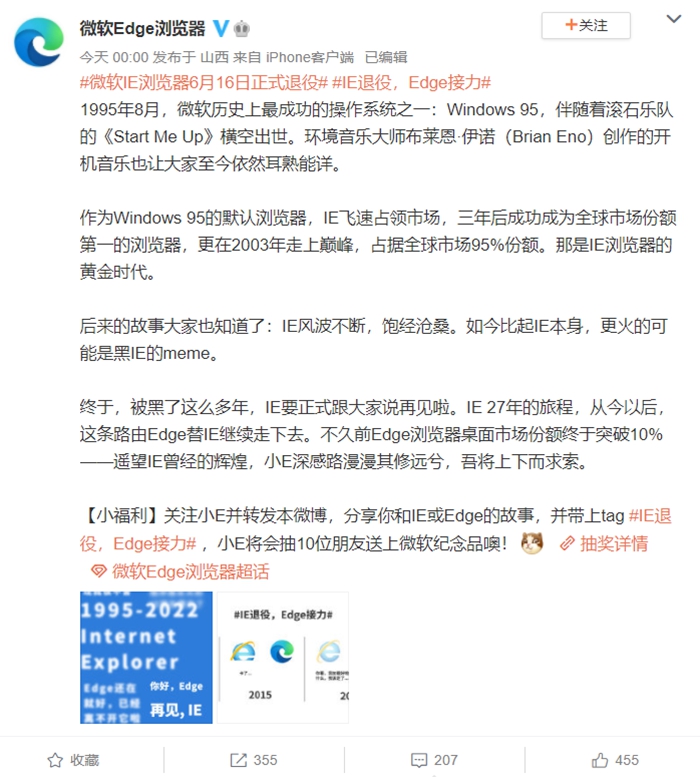 Although Microsoft has hinted before, but in the end, Microsoft officially announced the news on the 16th.

This topic once rushed to the hot search on Weibo, and many netizens said that the IE browser has witnessed the youth of several generations, "E-net is deeply in love" has become history, "Ye Qing knot".

"Looking back at the 27-year history of IE browser, it is like a person's life. It has had a brilliant peak, and it has also become a laughing stock. It carries memories of generations, and finally no 'goodbye'".

In August 1995, Microsoft released the operating system Windows 95, which introduced the concept of "window" into the PC market for the first time, and created the curtain of the visual PC era. Today, PC visual operation is still the mainstream operation mode.

As the default browser of Windows 95, IE quickly occupied the market. It can be said that "the debut is the peak", and it became the browser with the largest market share in the world three years later.

In 2001, the IE browser launched the most "classic" version 6.0, and reached its peak in 2003. Each version of the IE browser accounted for 95% of the global market share.

That was the golden age of Internet Explorer.

But "success is also a classic, failure is a classic", the 6.0 version of the IE browser has been used for 5 years, and it was not until 2006 that Microsoft updated IE 7, which was not changed. Makes no difference.

In 2011, Microsoft launched IE 9, which has changed a lot, but the concept of "IE is slow" has been deeply rooted in the hearts of the people, and IE 9 is powerless.

In 2015, Microsoft announced that it was incubating its other browser "son", the Edge browser.

During this period, various browsers bloomed in the market, such as Chrome, Firefox, Safari, etc. There were also 360, Baidu, Sogou, QQ and other browsers in China, and even websites for website navigation almost all had their own browsers.

However, in the face of menacing competitors, IE browser still maintains a slow pace of development, until it is about to retire, so far IE 11 has become the terminator of Microsoft's IE browser.

27 years of history, IE browser has only been updated for 11 generations.

How is IE browser "abandoned" by users step by step?

In the process of using the IE browser, the shortcomings of the IE browser are constantly exposed, such as slow speed, slow response, poor compatibility, and "crash" at every turn.

Of course, IE browser's competitors have sprung up and accelerated the "death" of IE browser.

Even, the dramatic scene was staged, and some netizens joked, "God, changing skins on the basis of IE is better than IE."

Finally, in 2010, the first stable version of Google Chrome Chrome that supports Windows, Linux and other three operating systems was released, which kicked off the nightmare of IE browser.

Before that, Chrome had been tested for over a year.

Today, according to survey data, the global market share of IE has fallen to less than 2%.

The comparison of these numbers has turned into users’ disappointment and complaints about IE. As the official Microsoft Edge browser said, “Nowadays, the more popular meme is black IE than IE itself.”

"As a developer, I hope that IE will be retired as soon as possible, and the province should be compatible with IE." "Please give IE a little respect, because without it, you cannot download other browsers." "The role of IE is to download other browsers. Browser, no one objected to me saying this?" The Internet's complaints about the IE browser can be seen everywhere.

Some netizens even spoofed and selected the slowest things in the world, "sloth, turtle, starfish and IE." "Who gave IE the courage to ask if it should be set as the default browser?"

IE is not only "blackmailing", but Microsoft's browser is also "self-defeating". On April Fool's Day this year, the Microsoft Edge browser tweeted that the Edge browser will withdraw from the stage of history in 10 days.

At the same time, IE browser will continue to provide services for all users, Welcome back to IE era!

With the end of the IE browser, a series of problems have arisen.

It is understood that the online registration system of many test websites still stipulates that IE browser must be used. How to solve this?

Some netizens are worried, "The elders will definitely ask, where did that blue 'e' go?"

At present, some domestic browsers maintain compatibility with the IE kernel.

The person in charge of 360 browser technology told Zhongxin Finance that the 360 ​​browser will continue to maintain dual-kernel support for a long time, that is, it supports both the Chrome kernel and the IE kernel, and can automatically switch to a more suitable kernel for website adaptation.

It is also understood that even if the IE browser is retired, Microsoft will still bring continuous improvements to the "IE compatibility mode" of the Edge browser.

IE mode in Edge extends the use of legacy applications even after IE is deactivated.

It is not difficult to see that Microsoft still has to play the game on the "cake" of the browser.

"IE's 27-year journey, from now on, this route Edge will continue to go on for IE. Not long ago, the desktop market share of Edge browser finally exceeded 10%. Looking at the glory of IE, Xiao E deeply felt that the road was long. , I will search up and down." Microsoft's summary of IE does not forget to pave the way for Edge.

However, whether Edge can regain IE's former glory remains to be verified by time.