Weighing 2800 tons! The pouring of the 100th concrete box girder in the deep middle channel has been completed

China News Service, Zhongshan, May 15 (Cai Minjie, Liu Hailang, Yang Ning) On the 15th, the 100th 60-meter concrete box girder of the Shenzhen-Zhongshan Channel Project was successfully poured, which lasted 10 hours, weighing 2,800 tons. According to Lu Qing, the project leader of the second branch of the S07 contract section of the Shenzhong Channel Project Department of the China Railway Bridg 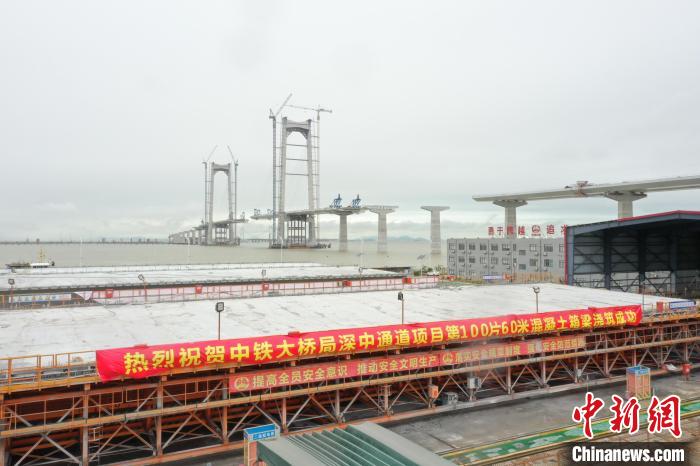 The Shenzhen-Zhongshan Channel is a super-large sea-crossing cluster project integrating "bridges, islands, tunnels, and underwater communication", with a total length of about 24 kilometers.

The concrete box girder poured this time is 60 meters long, 20 meters wide, and weighs 2,800 tons after pouring. After the prefabrication is completed, the "Tian No. 1", an integrated frame-transporting ship with a capacity of 3,600 tons independently developed by the China Railway Bridge Bureau, will be erected. .

The putting into use of the integrated rack-transporting vessel will effectively reduce the investment of tugboats and transport vessels and the time for process transformation and handover, and improve the ergonomics and safety of box girder erection.

"Among the 60-meter concrete box girders in the deep channel, 141 of them are 20-meter standard wide beams, and 14 are variable-width beams, with a maximum beam width of 24 meters. The maximum weight of the variable-width beams after pouring is 3,180 tons, equivalent to 2,000 cars. The top area of ​​the beam body is equivalent to 4 standard basketball courts, and it can be called the 'beam king of the world', which also adds a lot of difficulty to the prefabrication and erection of the box beam." Lu Qing said.

To this end, the project department built an intelligent manufacturing production line for box beams, and applied technologies such as Internet of Things +, BIM and informatization to create a smart beam field with "intelligent tooling equipment", "intelligent process card control" and "refined construction management" .

It realizes the automation of formwork, steel bar parts and intelligent concrete production, and improves the prefabrication quality and work efficiency.

Since the first 60-meter concrete beam was successfully poured in February 2021, 100 pieces of 60-meter concrete beams have been prefabricated in the Shenzhong Channel. It is planned to complete the prefabrication of all concrete beams in October this year, and complete the whole line of non-navigation hole bridge boxes within this year. The erection of the beam will lay a solid foundation for the completion and opening of the Shenzhen-Zhongshan Channel to traffic in 2024.

After the opening of the Shenzhen-Zhongshan Passage, the existing 2 hours from Shenzhen to Zhongshan will be reduced to 20 minutes, and the two places will simultaneously enter the "half-hour life traffic circle", which will promote the interconnection of industries on both sides of the Pearl River and the efficient allocation of various elements, and accelerate the development of the Bay Area. The integrated development of district urban agglomerations has important strategic significance.