Sino-Singapore Jingwei, May 16th (Fu Jianqing) Today (16th) at 24:00, a new round of domestic refined oil price adjustment window will open. Comprehensive institutions predict that this round of refined oil prices will increase, or the eighth increase this year.   During this round of pricing cycle, U.S. oil (WTI) once fell below $100. However, with the release of CPI and PPI data in the United 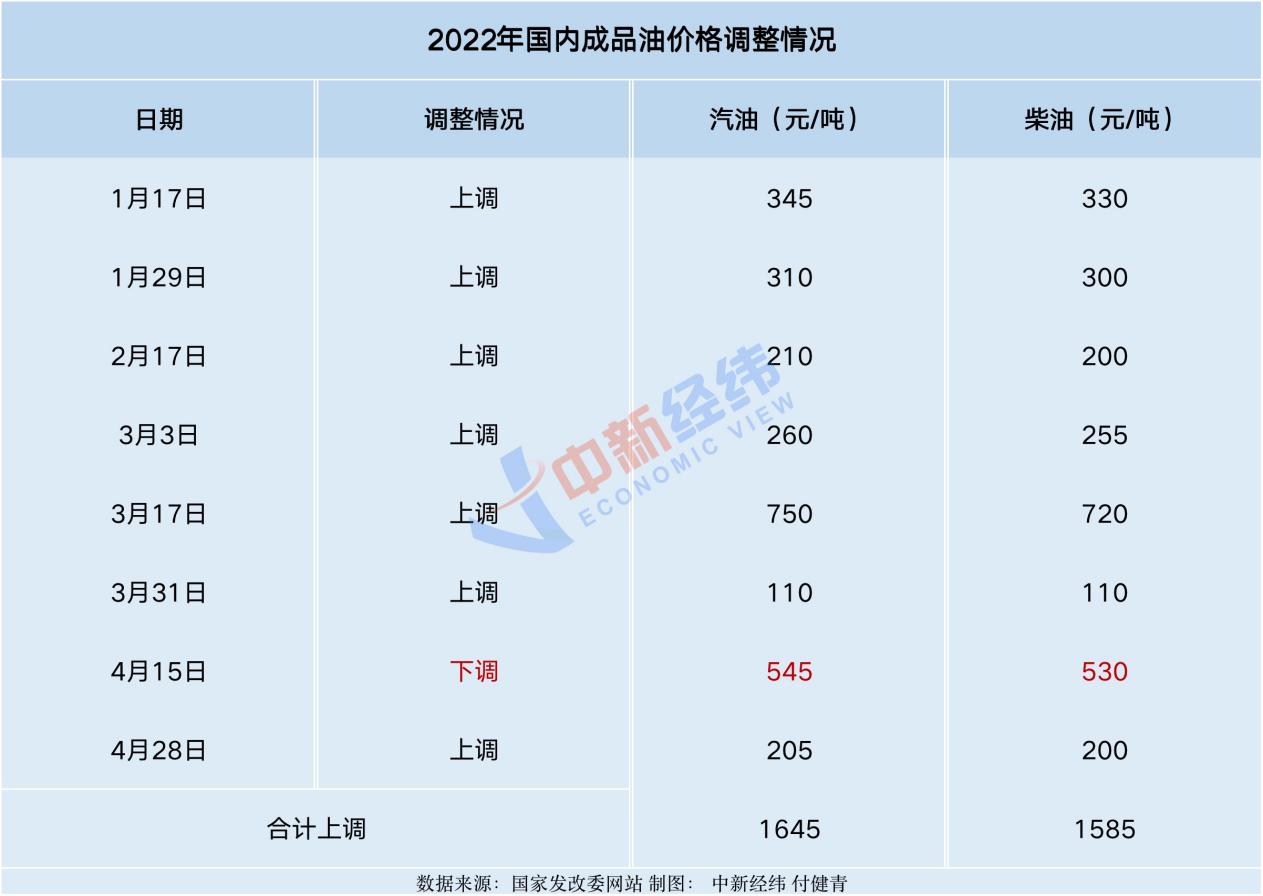 Comprehensive institutions predict that this round of refined oil prices will increase, or the eighth increase this year.

However, with the release of CPI and PPI data in the United States in April, the inflation pressure at the high point in the past 40 years has put pressure on US stocks one after another, and the impact of the conflict between Russia and Ukraine continues, and international crude oil has continued to rise.

In addition, the International Energy Agency (IEA) recently lowered its forecast for global oil demand growth in the second quarter in its monthly oil report.

Sino-Singapore Jingwei noted that since the beginning of this year, domestic refined oil prices have undergone eight rounds of adjustments, with a total of "seven ups and one down", with gasoline prices increasing by 1,645 yuan/ton, and diesel prices by 1,585 yuan/ton.

Among the seven prices that have been raised, the largest adjustment was made on March 17, in which gasoline was raised by 750 yuan per ton and diesel by 720 yuan per ton.

If this round of adjustment is implemented, it will be the eighth increase this year.

According to the calculation of Zhongyu Information, on the ninth working day of this round, the estimated price of Zhongyu crude oil was 107.17, which was 2.202 or 2.10% higher than the benchmark price.

According to Jinlianchuang's calculations, as of the ninth working day, the average price of reference crude oil varieties was US$107.47 per barrel, with a rate of change of 2.19%, and the corresponding domestic retail price of gasoline and diesel should be increased by 240 yuan per ton.

It is expected that the retail price increase in this round may be around 250 yuan / ton, and the price of No. 92 gasoline will increase by about 0.20 yuan.

In addition, according to the calculation of the Southwest Securities Automobile Industry Research Report, it is estimated that the oil price will be raised by 220 yuan/ton, which exceeds the red line. The equivalent liter is calculated as the expected oil price increase of 0.17-0.20 yuan/liter. After the price adjustment, the national average price of No. 92 gasoline is about 8.7 yuan/liter. liter, 95 gasoline is about 9.2 yuan / liter.

Regarding this round of price hikes, Zhongyu Information believes that the EU sanctions on Russian oil products have not been successfully implemented. At the same time, European countries have proposed plans to gradually reduce their dependence on Russian oil. Under the interweaving of bullish and short news, international oil prices may continue to fluctuate widely in the near future.

However, due to the negative impact at the end of the pricing cycle, the end of the continuous rise in the retail end of refined oil products has been determined.

In the market outlook, Soochow futures analysis shows that oil price support is mainly due to the supply gap of OPEC+, Russian supply risks, and lower-than-expected production growth in the United States, which are relatively realistic and difficult to change in the short term.

The pressure on oil prices mainly comes from the expected economic downturn and the domestic epidemic. The former is currently more inclined to emotional transmission, and the latter is not expected to last for a long time.

However, the market outlook still needs to be alert to the Fed's interest rate hike and the slowdown in economic and energy demand.

All rights reserved by Sino-Singapore Jingwei. Without written authorization, any company or individual may not reproduce, extract or use in other ways.