The tourism sector, under the leadership of the late Sheikh Khalifa bin Zayed Al Nahyan, may God have mercy on him, made qualitative leaps, to make the UAE among the top 10 globally in the main global competitiveness indicators related to the tourism, travel and hotel sector during 2021. 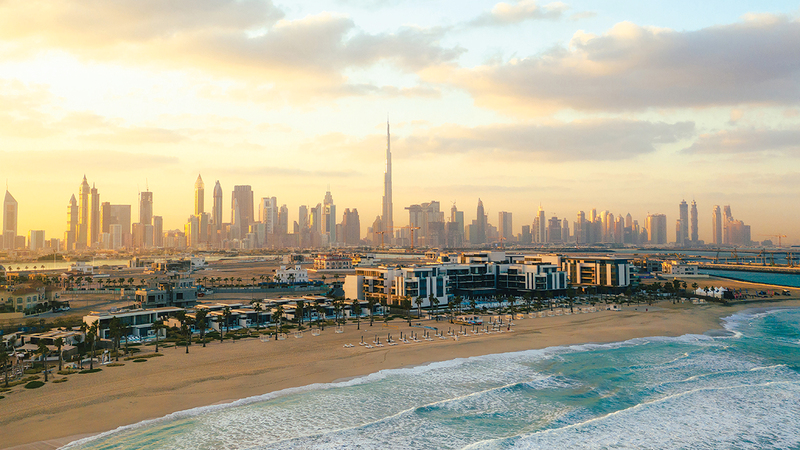 The country's success has set an inspiring model for many countries

The tourism sector, under the leadership of the late Sheikh Khalifa bin Zayed Al Nahyan, may God have mercy on him, has made qualitative leaps, to make the UAE among the top 10 globally in the main global competitiveness indicators related to the tourism, travel and hotel sector during 2021.

The success of the tourism sector in the UAE constituted an inspiring model for many countries, especially that the UAE was able to strengthen its position on the global travel and tourism map, to become one of the most important and largest global tourist destinations, according to many specialized international reports and indicators.

The number of new hotels during the current decade has increased in the UAE, as the number of hotels in the UAE reached 1,089 in 2020, while the hotel capacity in the country reached 180,000 hotel rooms.

The UAE topped the Arab world and the region, and ranked among the top 10 globally in the main global competitiveness indicators related to the tourism, travel and hotel sector during 2021, which enhances the country's position as one of the most preferred tourist destinations globally, which attracts more than 27 million visitors annually.

According to the Federal Center for Competitiveness and Statistics, hotel establishments and their distinguished services are a large part of the elements of tourism that help attract tourists from home and abroad. Therefore, the emirates of the country were keen to expand investment in this sector, to accommodate the large annual increase in tourism demand, according to the needs and components of each emirate. .

In the post-pandemic period, the tourism sector continued its continuous recovery, reaching and topping global centers in many indicators.

In 2021, hotel establishments achieved revenues of 28 billion dirhams, achieving a growth of up to 70% compared to 2020.

In addition, during the past year, more than 75 million hotel nights were booked, an increase of 42% compared to 2020, while the hotel occupancy rate reached 67%, knowing that this percentage represents one of the highest rates achieved in the leading tourist destinations in the world.

The Center indicated that the UAE, through its unique tourist, heritage and urban attractions, has become the focus of attention for visitors from different countries of the world, who are keen on making the UAE a stop on their tourist tours, pointing at the same time to the pivotal role played by domestic tourism in The process of recovering the local tourism sector from the global repercussions of the “Covid-19” pandemic, which has affected global tourism significantly during the past two years, which enhances the strength of the tourism sector, and its role as a major contributor to supporting the national economy.

An integrated tourism system at the state level

The domestic tourism sector in the UAE has been witnessing remarkable activity for years, thanks to the vision of the UAE government, which launched the “Internal Tourism Strategy” in December 2020, with the aim of developing an integrated tourism system at the state level, and regulating local tourism among the seven emirates, in cooperation with various local and federal authorities and institutions. Concerned with the tourism, heritage, culture and community entertainment sector, and enhancing the role of the domestic tourism sector in supporting the national economy, as well as thanks to a package of promotional projects and initiatives that attracted a wide segment of Emirati society.

The UAE embraces many tourism options that combine modernity, history, natural and industrial landmarks, such as the Burj Khalifa, the Louvre Museum, the Dubai Frame, the Yas Island projects, Saadiyat, Al Qasba, Al-Zawra Nature Reserve, Jebel Jais, and other landmarks that have formed global tourist icons. , all contributed to the sustainability of tourism growth, and enhanced the sector's position on the regional and global map.

• State hotels recorded the highest rates of hotel occupancy globally, at 67%, during the past year.

• Hotel establishments in the country last year attracted 19 million hotel guests, with a growth of 29% compared to the number of guests for the year 2020.