The first quarter of the car company: some people sell 5 units to earn 1 unit, and some people have double revenue and profit

Zhongxin Finance, May 8 (Ge Cheng) The auto industry in 2022 can be described as "a rough start". Following the "barrenness" of cores and the "boundness" of lithium, the "demon" of nickel has come again. One wave has not settled, and another has risen. Despite the unfavorable factors of chip shortages and rising raw material prices, under the impact of the epidemic, the automotive industry chain 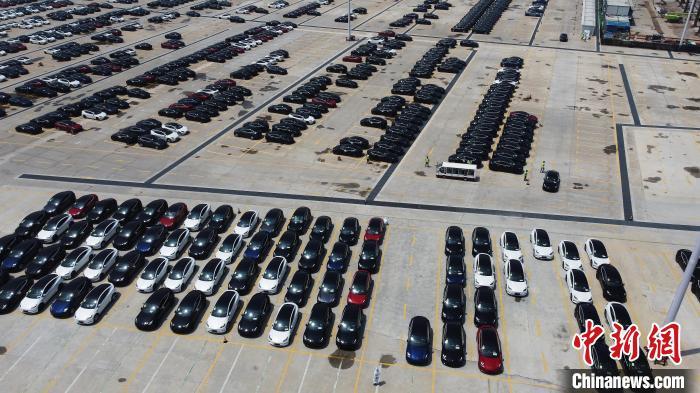 Zhongxin Finance, May 8 (Ge Cheng) The auto industry in 2022 can be described as "a rough start".

Following the "barrenness" of cores and the "boundness" of lithium, the "demon" of nickel has come again.

One wave has not settled, and another has risen.

Despite the unfavorable factors of chip shortages and rising raw material prices, under the impact of the epidemic, the automotive industry chain has ushered in a "wave of production shutdowns", and parts and vehicle companies have suffered severe setbacks.

On April 21, the domestic Teslas that had just come off the production line were parked in the factory one by one in an orderly manner.

At the same time, the revenue of various car companies has also fluctuated, and the automotive industry has shown a situation of "ice and fire".

As the most profitable new energy car company last year, Tesla's data on the profit margin of a single vehicle can be described as "one-of-a-kind".

In the fourth quarter of 2021, its bicycle gross profit was as high as 30.6%, much higher than its peers in the industry.

In the first quarter of 2022, Tesla can be described as "going further" in terms of making money.

The financial report shows that in the first quarter of 2022, Tesla’s total revenue was $18.756 billion, an increase of 81% from the same period last year.

Supporting the above profits is the cumulative delivery of about 310,000 new cars by Tesla in the first quarter.

In the first quarter, fuel vehicles accounted for only 1.75% of BYD's sales of all models.

In April, BYD announced that it will comprehensively transform new energy vehicles and stop the production of fuel vehicles.

Some are happy, some are worried

In the first quarter, the revenue and profits of car companies such as Tesla and BYD were still rising, and the increase was obvious.

In contrast, some car companies experienced a decline in both revenue and profit in the first quarter, or increased revenue but not profit.

In this regard, SAIC Group explained in its financial report that such a phenomenon was caused by the expansion of the loan scale of its subsidiary SAIC Motor Finance Co., Ltd. and the decrease in sales revenue due to the impact of the epidemic in the first quarter.

In the second quarter, the sales environment for car companies is expected to be more complicated and difficult

In the second quarter, the national passenger vehicle market will face a more complex and difficult environment, which has become the consensus of the automotive industry.

Cui Dongshu, secretary-general of the Passenger Federation, said that previously, the Shanghai epidemic caused a temporary stagnation of the automobile industry chain, which caused huge losses to automobile production and sales.

According to the calculation of the China Automobile Association, in April 2022, the sales volume of the automobile industry is expected to complete 1.171 million vehicles, a decrease of 47.6% month-on-month and a year-on-year decrease of 48.1%.

SAIC Motor's production and sales report shows that in April, SAIC Motor's vehicle production totaled 158,000 units. Compared with the same period last year, the output was less than 40%. The impact of the epidemic on its production capacity is evident.

In addition to the impact of the epidemic on the production and sales capabilities of car companies, Cui Dongshu emphasized: "The sales of low-end and mid-end fuel vehicles have declined under the epidemic because consumers are not buying cars, not new energy vehicles."

Logistics capacity is recovering, who will become the dark horse?

On April 16, SAIC, Tesla and other OEMs were included in Shanghai's "First Batch of Key Enterprises "White List", and these OEMs were also included in the "white list" including mainland China, Shanghai For some key auto parts suppliers, including Fleur, Valeo and Aptiv, the auto industry chain has sounded the "build up" of recovery.

Recently, with the resumption of production of the automobile industry chain, some enterprises in Shanghai have gradually overcome the adverse factors such as supply chain and logistics, carried out closed-loop operation and production, and achieved stable batches of finished vehicles.

SAIC Motor said that its vehicle companies are expected to gradually resume normal production in mid-May, and the production and sales of vehicles in the month will strive to reach the level of the same period last year.

Cui Dongshu said: "Since the end of April, the auto supply chain has gradually recovered, and the number of vehicles with passes has increased. Several transportation transit platforms in Shanghai have opened up, realizing the opening of the national supply chain."

After the supply of spare parts was restored, some enterprises also burst into vitality, and their production capacity increased rapidly.

According to BYD's Production and Sales Express, in April, BYD's vehicle output reached 107,400 units, more than double that of the same period last year.

Minsheng Securities analysts said that BYD's market share is expected to further increase after its full-scale attack on the new energy field.