Sino-Singapore Jingwei, May 8 (Xue Yufei intern Hu Jingrong) On the 7th, E Fund Management Co., Ltd. (hereinafter referred to as E Fund) announced that fund manager Lin Sen resigned due to personal reasons. According to Wind data, the scale of public funds managed by Linsen exceeded 100 billion yuan at the end of the fourth quarter of 2021, and by the end of the first quarter of 2022, it was nea 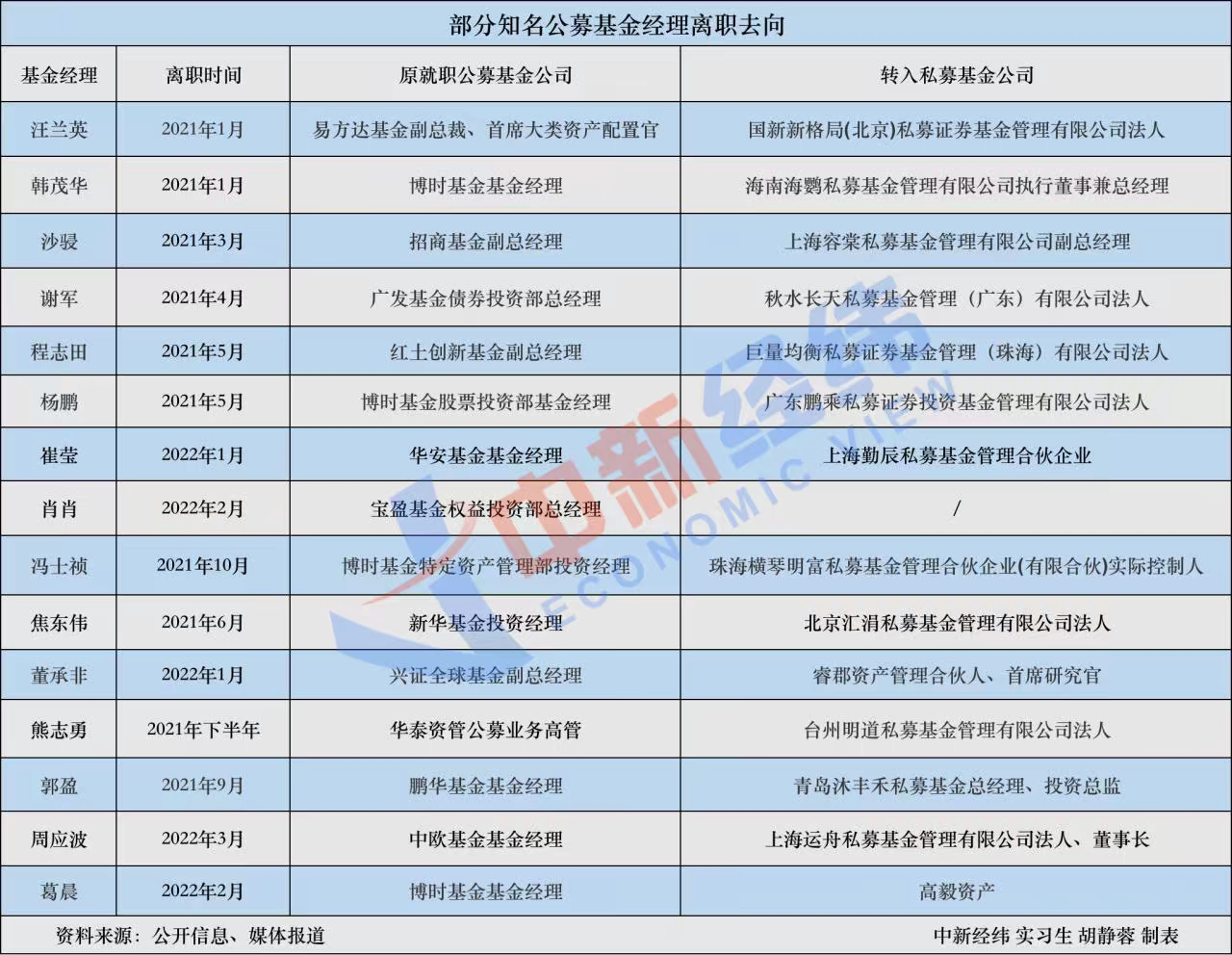 It is not known where Lin Sen will go to work, but the outside world mostly associates this with the current "public and private" phenomenon.

Since 2022, the number of public fund managers leaving has exceeded 100, and many of them have chosen to join private equity institutions.

The domestic “public and private” started roughly in 2007, and now there are a group of fund managers, such as Dong Chengfei, Zhou Yingbo, and Ge Chen, or start-up companies, or join big-name private equity.

Judging from the performance of public fund managers who have turned to the private sector in the past, they have achieved better returns as a whole.

Lin Sen's departure has long been a clue.

Like other fund managers, Lin Sen's management scale has expanded rapidly in the past two years.

Among the funds managed by Lin Sen, several have outstanding returns.

In November 2015, Lin Sen began to serve as the fund manager of E Fund, a hybrid fund with partial debt.

During his tenure, the size of the fund reached 9 billion yuan, the return was 127.53%, and the yield ranked high among the partial debt hybrid funds.

Of course, this is not due to Lin Sen alone. From May 2015 to September 2021, the fund has another fund manager, Zhang Qinghua, who is also a well-known figure in E Fund.

Lin Sen also served as the fund manager of E Fund Ruicheng for 5 years, with a return of 183.02% during his tenure.

E Fund Yuxiang Return is the largest fund under his management, with a scale of more than 40 billion yuan and a return of 53.85% during his tenure.

More than 100 public offering managers left during the year

It is not uncommon for fund managers to leave their jobs.

In January this year, Dong Chengfei, deputy general manager of Industrial Securities Global Fund, who has been in the industry for 15 years, resigned due to personal reasons.

The public funds he has managed in the past have outstanding performance. Xingquan Global Vision Equity Fund and Xingquan Trend Investment Mixed Fund have returned more than 300% during his tenure.

In February this year, Ge Chen, the former fund manager of Bosera Fund, joined Gaoyi Asset, which brings together many investment managers with rich market experience; Cui Ying, the former investment director of Huaan Fund, recently chose to join a newly established private equity; Baoying Although Xiao Xiao, the former fund manager of the fund, does not know where the next stop is for the time being, it was previously reported that he will also join a private equity firm.

There is no exact information about where Lin Sen will go after he leaves E Fund, but there are many speculations that he will go to private equity to seek employment.

However, according to the provisions of the "Measures for the Supervision and Administration of Directors, Supervisors, Senior Managers and Practitioners of Securities Fund Operating Institutions" implemented on April 1 this year, securities fund operating institutions shall not employ less than 6 employees who have left other securities and fund operating institutions. Monthly fund managers and investment managers, engaged in investment, research, trading and other related businesses.

This means that even if Lin Sen wants to join other securities fund management institutions, it will take some time.

In fact, private equity institutions are not only attractive to public fund managers, but also coveted by brokerage practitioners.

For example, in May 2021, Du Hui, the former deputy director of the Zhongtai Securities Research Institute, founded Shanghai Lingjiu Private Equity and completed the registration.

In June 2021, Beijing Huixin Juying Private Equity Fund was registered for the record. The actual controller, Zhu Yan, served as the senior vice president of the Asset Management Department of China Securities Investment from May 2017 to January 2021.

The reason is that "running away" is nothing more than getting better income, treatment, and more flexibility and diversity in investment strategies.

Compared with public funds, there are strict restrictions on investment direction and proportion, while private funds have fewer investment restrictions, and even in the case of a bad market environment, they can flexibly choose short positions.

The overall performance after "going to private" is better

After sorting out, it is found that the domestic “public to private” wave roughly started in 2007, when Xiao Hua, Zhao Jun and other well-known public fund managers invested in the private equity industry.

Then, relying on the bull market from 2014 to 2015, Hu Jianping turned to the private equity camp one after another.

Years of accumulated experience in the public offering industry have enabled many fund managers who are “public to private” to continue to achieve better returns.

In October 2021, Chaoyang Sustainability counted 204 "public-to-private" fund managers with updated net value of products in 2021. Among them, 116 have positive performance, accounting for 56.86%, and 11 have more than 30% performance. bit.

In April this year, Private Pai Pai.com conducted a statistical analysis of over 600 private equity fund managers with a starting performance of more than 3 years and a public offering background and found that their average return in the past three years was 48.02%, of which 35 fund managers Cumulative earnings have doubled in the past three years.

But not all "public and private" fund managers can continue to perform well.

For example, Wang Yawei, who used to be a top player in the public offering industry, has not performed very well since he founded Qianhe Capital.

In addition, in the short term, the current secondary market is not performing well, which also puts a lot of pressure on private equity institutions and managers.

According to the 2022 Q1 2022 Stock Active Strategy Private Fund Industry Report released by Sinolink Securities, the average yield of stock active strategy in the first quarter was -13.27%, slightly outperforming the CSI 300 Index, but only 7% of the products obtained positive earnings.

From the perspective of risk, the average maximum drawdown of stock active strategies in the past year is 21.22%.

On May 6 this year, Dong Chengfei, who joined Rui County for less than 3 months, announced that he planned to purchase a new fund of no less than 40 million yuan. The news detonated the market.

Some media said that he bet on his personal wealth.

According to previous data from Private Equity Pai Pai.com, as of April 28, 18 private equity institutions have announced self-purchase this year, and the cumulative self-purchase amount has reached 2.856 billion yuan.

Let us wait and see how these "public-to-private" fund managers will perform in the future and whether they can survive the market trough.