[V View 2021 Annual Report] The salary of 29 A-share chairman exceeds 10 million yuan, and the top of the list is not Chinese   Sino-Singapore Jingwei, May 5 (Fu Jianqing) Entering May, it means that the annual report season of A-share listed companies has ended. Most companies in the three A-share markets (Shanghai, Shenzhen, and Beijing) have disclosed their annual reports. In addition to compa 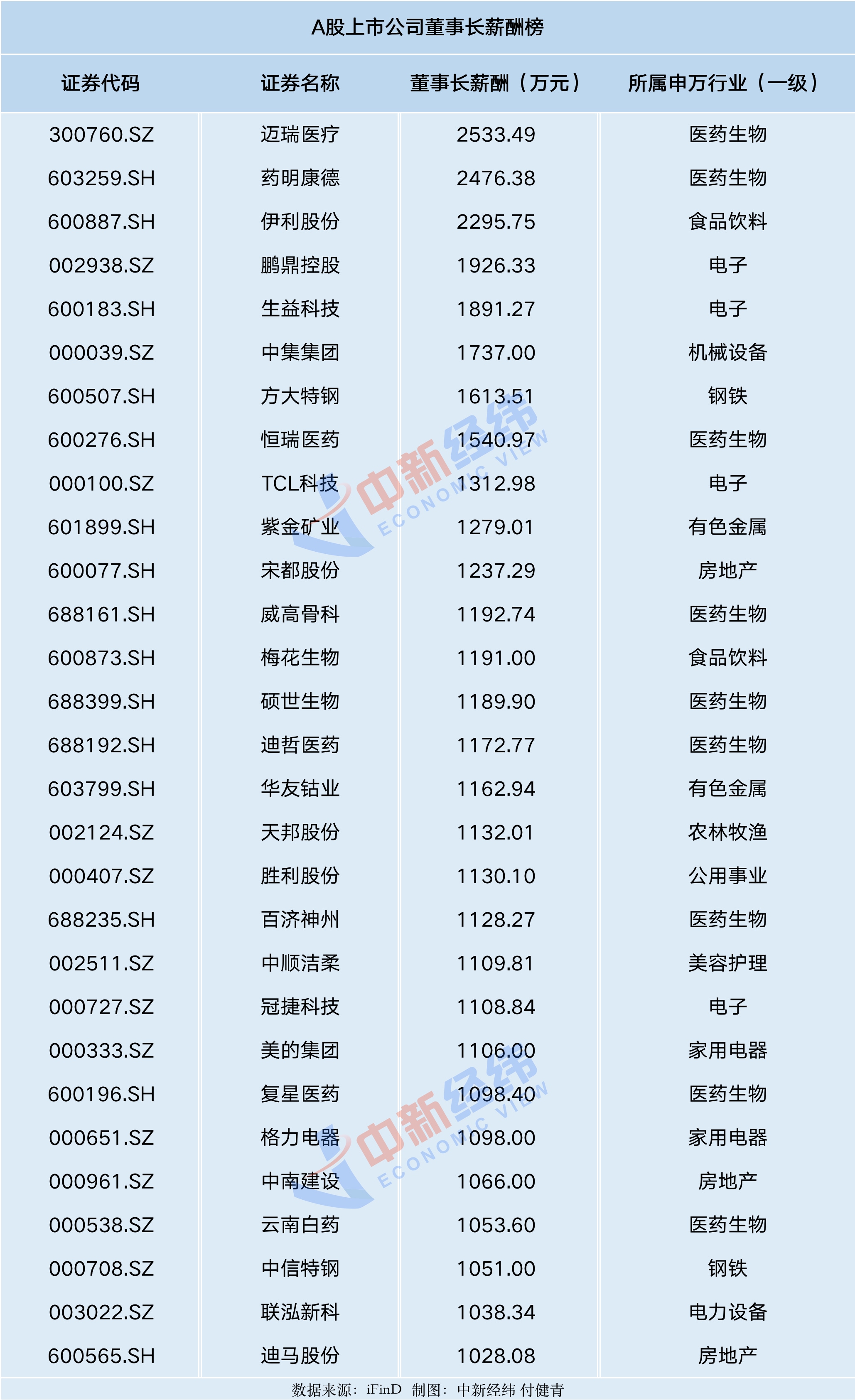 [V View 2021 Annual Report] The salary of 29 A-share chairman exceeds 10 million yuan, and the top of the list is not Chinese

Sino-Singapore Jingwei, May 5 (Fu Jianqing) Entering May, it means that the annual report season of A-share listed companies has ended.

Most companies in the three A-share markets (Shanghai, Shenzhen, and Beijing) have disclosed their annual reports.

Flush iFind data shows that among the chairman's remunerations that have disclosed specific figures, 29 are over 10 million yuan, and the number one ranking is as high as 25 million yuan.

Li Xiting, chairman of Mindray Medical, topped the list with a salary of 25.3349 million yuan

At the same time, the above three executives are also the only chairman of the board with a salary of more than 20 million yuan in 2021.

However, there are not a few chairmen with a salary of more than 10 million yuan, a total of 29, mainly in the pharmaceutical biology, electronics, food and beverage industries.

The high salary of the chairman usually stems from the company's excellent performance. Many listed companies in the above-mentioned list will have a net profit of several billions or even tens of billions in 2021.

However, there are also a number of companies that have "special" circumstances.

Among the 29 listed companies owned by the chairman with an annual salary of 10 million, 6 will have a net loss in 2021.

There are many changes in the chairman's ten million salary list in 2021 and 2020.

In 2020, there are a total of 18 listed companies whose chairman salary exceeds 10 million yuan, and 4 of them exceed 20 million yuan.

In 2021, 5 of the above-mentioned 18 chairmen will fall off the list with a salary of less than 10 million yuan, namely Jinke Co., Ltd., Vanke A, Shanghai Jahwa, Rongsheng Development and Ogilvy Medical.

It is worth noting that in 2020, Jiang Sihai, the then chairman of Jinke Co., Ltd., overwhelmed Mindray Medical Chairman Li Xiting with a salary of 25.9345 million yuan to win the top spot that year.

Regarding the reasons for the decline in the company's performance, Jinke said, firstly, it was mainly affected by the rising cost of land acquisition; secondly, due to the impact of real estate regulation and cash flow, the company made provision for impairment of assets such as inventories that were expected to be impaired. The amount was 2.162 billion yuan, a year-on-year increase of 427%; thirdly, due to the decrease in the income of real estate projects developed by joint ventures and joint ventures, investment income decreased by 509 million yuan compared with 2020, a year-on-year decrease of 39.06%.

Profits fell, and so did the chairman's pay.

According to public information, Li Xiting is a Singaporean and graduated from the Department of Physics, University of Science and Technology of China, majoring in cryogenic physics.

The steel industry can take the top spot in the above-mentioned rankings, mainly due to the sharp rise in the average price of steel in 2021, and the overall outstanding performance of listed companies in the industry.

According to the operation of the steel industry previously disclosed by the Ministry of Industry and Information Technology, for the whole year of 2021, the cumulative operating income of key large and medium-sized steel enterprises was 6.93 trillion yuan, a year-on-year increase of 32.7%; the total cumulative profit was 352.4 billion yuan, a year-on-year increase of 59.7%, a record high; The sales profit margin reached 5.08%, an increase of 0.85 percentage points from 2020.

From the perspective of the growth rate of net profit in the steel industry, Baotou Iron and Steel Co., Ltd., Bengang Steel Plates, and Hainan Mining ranked the top three.