China News Service, Ningbo, May 3 (Xi Jinyan, Hong Yuxiang, Hu Jinqu) This May Day "holiday", in Ningbo Zhoushan Port, heavy trucks carrying containers come and go, and ocean-going ships are full of Chinese products and set sail from here to sea. A fiery picture.   It is reported that in April, Ningbo Zhoushan Port is expected to complete a container throughput of more than 3 million TEUs, a re 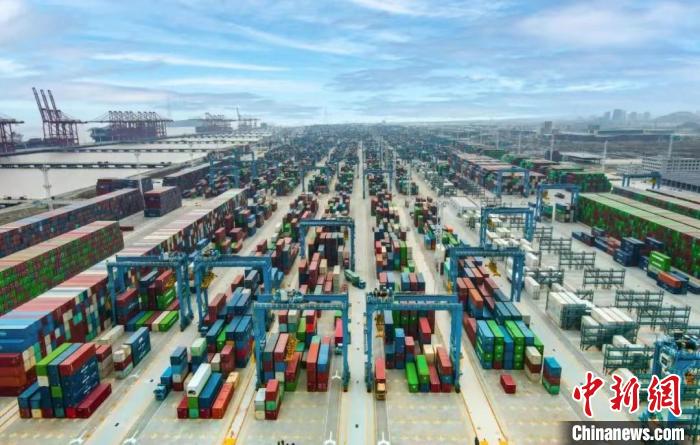 Since April, in the face of the complex and severe situation brought about by the spread of the epidemic in many parts of the country, Ningbo Zhoushan Port has paid close attention to epidemic prevention and control and transportation guarantee work, and has cooperated with the preferential policies for logistics guidance issued by local governments, which has greatly alleviated the situation. The export pressure of foreign trade enterprises in the Yangtze River Delta region and the Yangtze River Economic Belt.

Suzhou Aipu Electric Co., Ltd. is an enterprise mainly engaged in the research and development and manufacture of small household appliances. The vacuum cleaners and other products produced are exported to the United States, the United Kingdom, Canada, France and other countries and regions.

"The customer has the final say on whether the product is good or not. Meeting the personalized order needs of foreign customers has allowed us to open up more markets. This is not only due to our advanced production system and testing system, but also depends on a smooth logistics supply chain and fast speed. The efficiency of export customs clearance will allow us to save costs and improve production efficiency." According to Yin Yi, the company's foreign trade manager, this year, due to the impact of the epidemic and shipping schedules, they have chosen to export more at Ningbo port, and the export volume of products in the first quarter has grown steadily. .

In order to help stabilize foreign trade, Ningbo Zhoushan Port has made every effort to unblock the two-way logistics "artery" of land and sea.

At the same time, Ningbo Zhoushan Port took advantage of the direct railway access to the port area, strengthened communication and coordination with the Railway Bureau, increased the number of lines, and ensured the operation of key trains. In April, the volume of container sea-rail combined transportation was 135,000 TEUs, a year-on-year increase of 32.3%. .

In terms of sea direction, Ningbo Zhoushan Port strengthened its linkage with shipping companies, and met the growing demand for space and empty containers brought about by logistics and transshipment through measures such as opening new routes, increasing shipping space, and adjusting empty containers. In April, the number of container routes in the port increased to 297 , a record high; the volume of imported empty containers increased by 50% year-on-year.

In order to fully improve the port's passing capacity and service level, Ningbo Zhoushan Port overcomes the influence of heavy fog and strong wind and bad weather internally, plans in advance, makes overall planning and coordination, maximizes the use of the port's coastline resources, and scientifically arranges ship berths and berthing times. The average daily number of operations at the container terminal remains above 140.

At the same time, in response to the explosion of the LCL warehouse business volume around the port area, Ningbo Zhoushan Port immediately contacted 13 major LCL warehouse enterprises with customs supervision qualifications in the Ningbo area to set up export LCL advance shipments. Port green channel, allowing qualified containers to enter the port in advance.

"After the launch of the new policy, the turnover efficiency and operation capacity of our LCL warehouse have been greatly improved, the daily LCL capacity has increased by more than 30%, and the waiting time for bulk cargo vehicles to unload has been reduced by more than 24 hours." The relevant person in charge of Longxing Logistics said.

In the next step, Ningbo Zhoushan Port will continue to strengthen cooperation with relevant parties and make positive contributions to continuously ensuring the smooth and stable supply chain of foreign trade enterprises.